You May See a New Meteor Shower in Night Skies, or Nothing at All 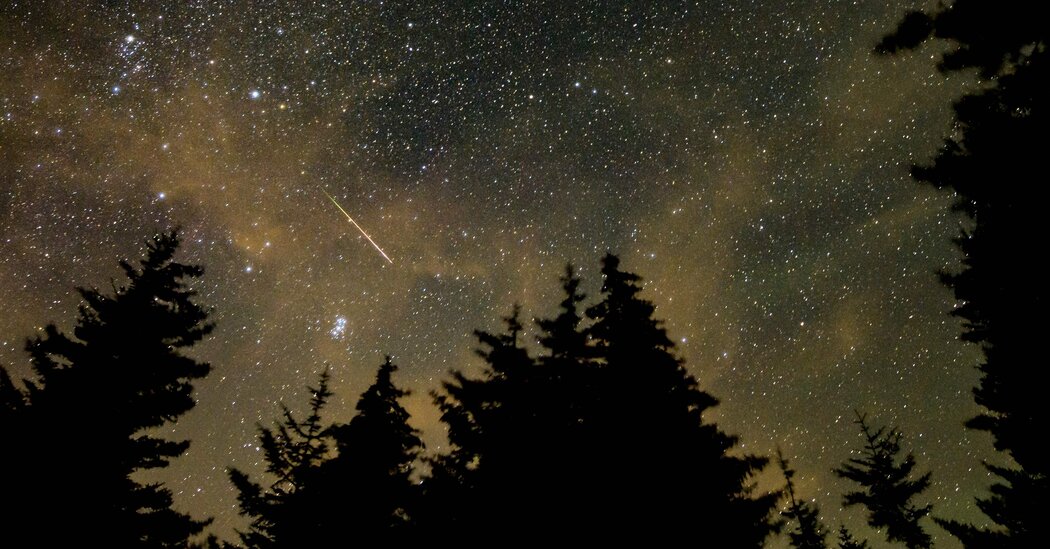 A never-before-seen meteor shower may light up the skies with untold numbers of brilliant streaks the evening of Monday night into Tuesday morning.

Or the event could fizzle out and be a dud.

Those are the best predictions that meteor watchers have for the Tau Herculids, a potential celestial spectacle that has sky-watching enthusiasts eager with anticipation.

Meteor showers can happen when the Earth plows into debris produced by a comet (or, occasionally, asteroids). The source of the Tau Herculids is Comet 73P/Schwassmann-Wachmann 3, or SW3 for short. Discovered in 1930, the trifling ice ball originally clocked in at about two-thirds of a mile in diameter, so it rarely produced enough material to generate major nighttime fireworks. But in 1995, SW3 crumbled, producing a large fragment field that our planet is about to encounter.

When and where can I see the potential shower?

If the Tau Herculids happen, they will be most visible throughout the lower 48 United States on the evening of Monday, May 30, and the early morning of Tuesday, May 31, likely around 1 a.m. Eastern time. The further south you live, the better your view. Skywatchers in West Africa, the Caribbean and South America are also favored to see some action. Those in high latitude places like Alaska are out of luck.

To catch the shower, get away from bright city lights and find the darkest and clearest location you can, one with few hills or other obstacles on the horizon. The moon will be new that night, so its light will not interfere with the display. Allow about half an hour for your eyes to adjust to the darkness.

“The best piece of equipment is to go to your attic and haul out that beach chair,” said Joe Rao, an associate astronomer at the Hayden Planetarium in New York. “Then just lay back and look up.”

Meteor showers appear to emanate from a point in the sky known as their radiant. The Tau Herculids, the meteor shower from SW3, was predicted to come from the constellation Hercules — hence the shower’s name — a forecast that has since turned out to be incorrect.

The Tau Herculids will actually originate from the constellation Boötes, radiating from just above the star Arcturus, a ruddy orange-yellow entity that will be the brightest star in the sky of the Northern Hemisphere at that time. Locating Arcturus is easy if you can find the Big Dipper: Simply trace a line from the last two stars in the Dipper’s handle in a direction away from its bowl. The first bright star you see should be Arcturus.

Unlike meteor showers that are visible for days before and after a peak night, this show will not last long, if it occurs at all.

“This is not a long-term event,” said Robert Lunsford, the secretary-general of the International Meteor Organization. “I would certainly try to be out at 10 o’clock Pacific time or 1 a.m. Eastern, because if nothing’s happening then, then it’s a nonevent.”

“That’s the $64,000 question,” said Mr. Rao. “There’s no consensus. The predictions are absolutely all over the place.”

NASA models are on the pessimistic side, suggesting few or potentially no meteors will be visible. But Mr. Rao points to estimates from reputable meteor watchers at the opposite end of the spectrum who predict seeing as many as 10,000 meteors to 100,000 meteors per hour. If those are true, the Tau Herculids will be a meteor storm and possibly one of the biggest displays in recorded history.

“I’d be happy just to see one in the entire hour,” Mr. Lunsford said. “But there’s a possibility we could see one per second.”

Much will depend on the size and the speed of the debris as it hits the atmosphere and how big the comet’s leftover particles are.

“The particles may be sand-grain-sized,” said Mr. Rao. “I maintain that there must be stuff out there at least as big as pebbles, or nuggets, or even ping-pong-ball-size.”

If the fragments are on the smaller side, they may produce many slow streaks that are too dim for the human eye to see. Night sky devotees have been burned before when announcing possible wonders like the supposedly once-in-a-lifetime sighting of Comet Kohoutek in 1974 that failed to live up to expectations.

“We’ve gotten a lot of black eyes over predicting some marvelous event, and then nothing happens,” said Mr. Lunsford. “We need a certain set of circumstances to occur for this meteor shower, and the likelihood is remote. But we owe it to the general public to let them know this is a possibility.”

Why might the Tau Herculids appear for the first time?

But in October 1995, astronomers began getting phone calls from people claiming to have discovered a new comet, Mr. Rao said. The comet wasn’t new: It was SW3 falling apart and becoming hundreds of times as bright as normal, he added.

“It was like breaking open an egg,” he said. “All this dusty debris suddenly emerged.”

While our planet has already hit bits of SW3’s dust, this will be the first time the Earth’s orbit meets all the material that burst out in 1995.

No one is exactly sure what caused SW3’s collapse, but NASA’s Hubble and Spitzer space telescopes watched the comet fragment for years. It was possible that the icy object made too many close passes to both the hot sun and the powerful gravitational pull of Jupiter.

“Maybe after countless numbers of times of having its orbit perturbed, it’s like the comet finally said, ‘I can’t deal with this anymore,’ and broke up into pieces,” Mr. Rao said.

When did we learn what caused meteor showers?

Humans have been spotting “shooting stars” for millenniums. It is unknown when ancient skygazers first associated them with a particular point in the sky. Mark Littmann, author of “The Heavens on Fire: The Great Leonid Meteor Storms,” says that some Indigenous traditions in the Americas may indicate an early understanding of radiants.

The Kiliwa, who are Indigenous people in Baja California, Mexico, for instance, describe meteor showers as a kind of fiery celestial urine coming from a constellation they call Xsmii.

“​​If you think of a meteor shower, and you have, excuse me, the spray coming out, it suggests that they noticed there was a radiant,” Dr. Littmann said. “That would be the most ancient observation of a radiant that we have.”

The oldest-known written observation of a radiant came from Islamic sky watchers who recorded a great shower after the death of the conqueror Abu Ishaq Ibrahim II ibn Ahmad in A.D. 902. They noted that the meteors were coming from one spot as they rained, Dr. Littmann said.

Our modern understanding of meteor showers can be traced to the late 18th century, when people noted a major comet passing by a year before a large meteor storm from the direction of the constellation Leo. Then on Nov. 12, 1833, the Leonids shower put on a display so spectacular that thousands of shooting stars fell every minute.

“There were reports of people falling to the ground in prayer and rushing to church to repent their sins,” Dr. Littmann said.

Denison Olmsted, who was an astronomer in Connecticut, was awakened by his neighbors that night and went out to see the storm. Olmsted wrote to a local newspaper asking viewers to send him their own accounts, a request that was reprinted in newspapers across the country.

After collecting many replies and conducting further investigations, Olmsted concluded that meteor showers originate beyond our planet, contradicting a long-held belief expressed by Aristotle that meteors were exhalations from Earth’s surface.

“He really should be credited as the father of meteor science,” Dr. Littmann said.