Wrestlers’ protest against WFI chief called off: What happened in three days 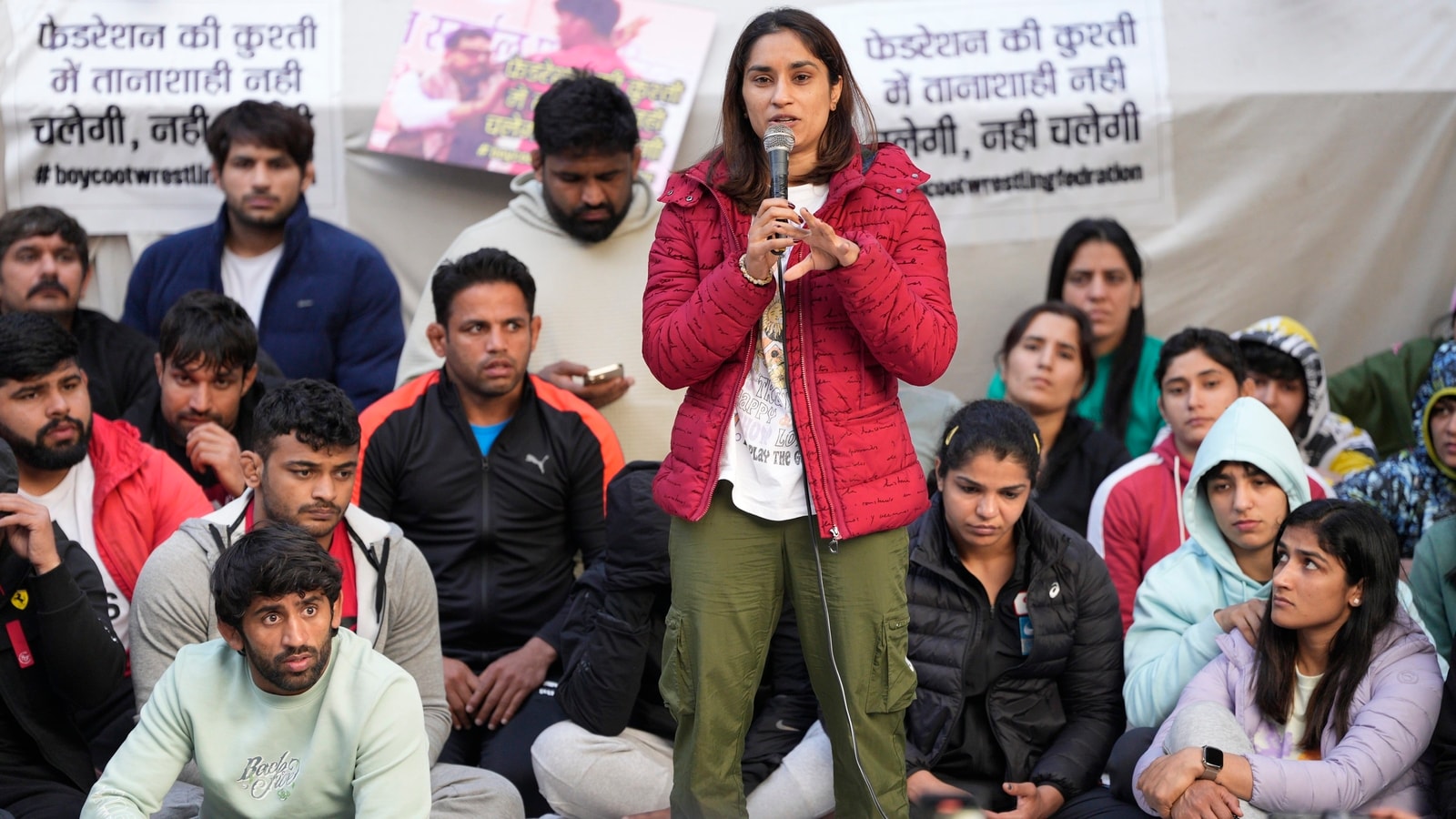 Over the years, Delhi’s Jantar Mantar has witnessed hundreds of protests –some of the prominent ones being Anna Hazare’s anti-corruption movement, the One-Rank-One-Pension scheme and the outpouring of people over the Nirbhaya gangrape case. On Wednesday, the venue saw unprecedented scenes. The country’s top wrestlers, including Tokyo Olympics bronze medallist Bajrang Punia and world championship medallist Vinesh Phogat, staged a protest against Wrestling Federation of India (WFI) president Brij Bhushan Sharan Singh, levelling serious charges of sexual harassment against him, and coaches of the federation.

Late on Friday night, the aggrieved grapplers called off their protest after getting assurances from the government that their grievances would be addressed, the first step of which was the stepping aside of under-fire Brij Bhushan.

January 18: In a startling revelation, a crying Vinesh Phogat alleged that Brij Bhushan Sharan Singh has been sexually exploiting women wrestlers for many years, a charge outrightly rejected by the sports administrator and BJP MP.

The 28-year-old though clarified that she herself never faced such exploitation but claimed that “one victim” was present at the ‘dharna’ they began at Jantar Mantar. So disturbed was Vinesh that she along with Bajrang Punia had even met Union home minister Amit Shah to flag their issues about three months back. Rio Olympic medallist Sakshi Malik, world championship medallist Sarita Mor, Sangeeta Phogat, Anshu Malik, Sonam Malik, Satyawart Malik, Jitender Kinha, Amit Dhankar and CWG medallist Sumit Malik were among 30 wrestlers who assembled at the famous protest site.

January 19: On day 2 of the protest, three-time CWG medallist and BJP leader Babita Phogat came with a “message” from the government in the afternoon and assured the grapplers that their demands will be met after elite wrestlers insisted that WFI be disbanded. The wrestlers’ late-night meeting with Union sports minister Anurag Thakur remained inconclusive as they refused to back down from their demand. The marathon meeting began around 10pm on Thursday. The wrestlers left Thakur’s house at 1:45am.

Politicians also reacted sharply with Haryana chief minister Manohar Lal Khattar asserted “we will not let their morale to break”. Congress leaders also came out strongly in support of the players, with former chief minister Bhupinder Singh Hooda saying “it is a matter of great misfortune and shame that our players, the pride of the country, have to protest on the streets today”.

Several Khaps in the state, including the Phogat Khap, also voiced support to the grapplers. A ‘Sarv Jatiya Khap Mahapanchayat’ was held in Charkhi Dadri.

The government gave the WFI president 72 hours (till Saturday evening) to respond to the allegations.

January 20: It was a high-voltage day. Taking cognisance of allegations of sexual harassment, the Indian Olympic Association, led by PT Usha, formed a seven-member committee, headed by MC Mary Kom, to probe the charges. The panel was constituted even as the wrestlers’ sit-in protest entered the third day which also saw them meet union sports minister Anurag Thakur for a second round of talks in less than 24 hours. Besides legendary boxer Mary Kom and wrestler Yogeshwar Dutt, the panel includes archer Dola Banerjee and Indian Weightlifting Federation president and IOA treasurer Sahdev Yadav.

In his UP bastion of Gonda, the WFI chief termed the protest “dharna of Shaheen Bagh” and said he won’t quit from the post. The WFI filed its reply to the ministry on Friday evening but Brij Bhushan cancelled his scheduled press conference. It was conveyed that he will speak with the media on Sunday, after the WFI emergency executive council meeting.

January 20-21: In a late-night development, the wrestlers, including Vinesh Phogat, Bajrang Punia, Sakshi Malik and Ravi Dahiya, decided to end their protest after a breakthrough was achieved during a marathon second round of talks with Anurag Thakur. Thakur said an oversight committee will be formed that will investigate the allegations. The committee, members of which will be named on Saturday, will also oversee the day-to-day affairs of the federation. Making the announcement, Thakur said the committee will submit its report in one month’s time.

Share
Facebook
Twitter
Pinterest
WhatsApp
Previous article
‘If Scindia is a BIG gun, then why BJP…’ Kamal Nath attacks ‘politically redundant’ Jyotiraditya
Next article
Opinion | The Jays might be closer to the World Series, but Vladimir Guerrero Jr. is no closer to a long-term contract