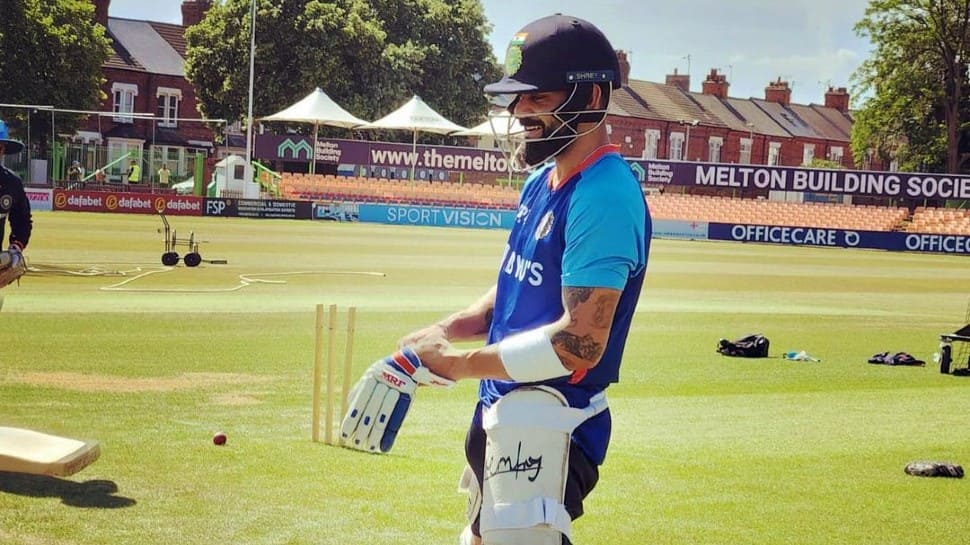 Team India are preparing for the upcoming fifth Test against England from July 1 – a match which was postponed from last year. Rohit Sharma’s side will take on Leicestershire County Cricket Club in a four-day match from June 24 and Team India members were joined by head coach Rahul Dravid along with Shreyas Iyer and Rishabh Pant on Tuesday (June 21). Former India captain Virat Kohli was pumped up ahead of the training session as well.

The Leicester club on Tuesday posted videos from India’s training session, one of which featured former captain Kohli giving a pep talk. Kohli on Tuesday shared a glimpse from his training session as he was seen preparing for the upcoming rescheduled fifth Test against England at Old Trafford starting on July 1.

Game mode = @imVkohli gives a team talk ahead of a busy day of preparations before @BCCI‘s Tour Match @leicsccc.

India will lock horns with England for the rescheduled fifth Test next month but before that the visitors have started training upon arriving. Kohli, the former India captain, on Tuesday shared pictures from his training session on the Koo app.

“Practice well. Stay happy,” Kohli captioned the post on the Koo app. Kohli was the skipper of Team India when the five-match Test series against England was originally played in 2021.

Meanwhile, Indian all-rounder Ravichandran Ashwin could not board the flight to England after being tested positive for COVID-19. The off-spinner came to Mumbai to travel with the Test team on June 16 but now he is in quarantine. The 35-year-old will only join the Test squad after meeting all protocol requirements. The rest of the members of the Indian Test squad are already in Leicester and training has begun in Leicestershire County Ground where they will play a 4-day practice match from June 24.

India currently leads the Test series 2-1. The fifth Test match, which was supposed to be held in Old Trafford, Manchester last year, was postponed due to COVID-19.