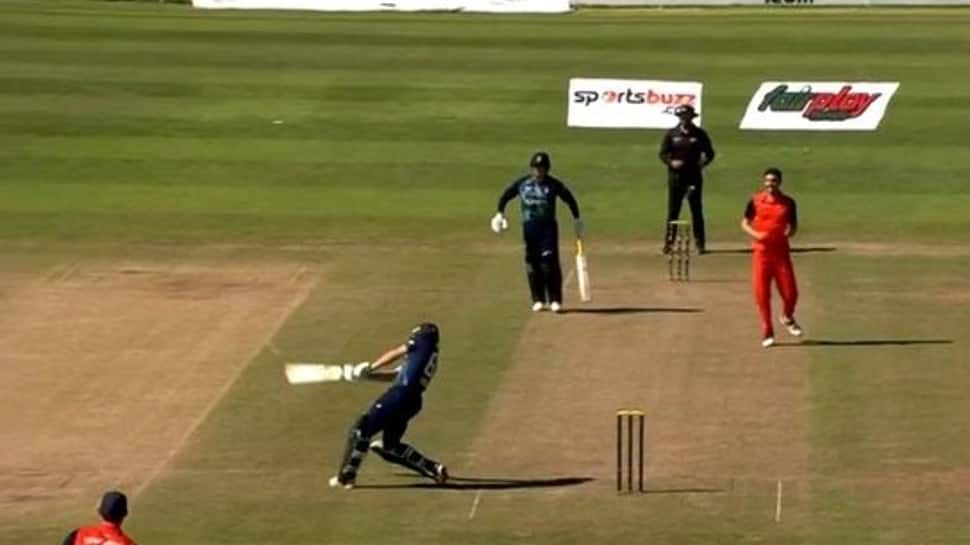 England batter Jos Buttler is in the form of his life. The right-hander was on fire once again as he took on Netherlands bowling attack in the third and final ODI of the series at the VRA Cricket Ground in Amstelveen on Wednesday (June 23). Chasing a total of 245 runs, England reached the target in just 30.1 overs as Jason Roy scored a ton and Buttler scored a fiery 86 off 64 balls. Buttler was the stand-in skipper in place of left-hander Eoin Morgan. The right-hander smacked 7 fours and 5 maximums during his knock of 86 in which one shot was inarguably not a piece of cake.

In Buttler’s five sixes, there was a delivery which landed outside the pitch and he smacked it over for a six too.

To be specific, it was Netherlands’ Paul van Meekeren, who was trying a slower bouncer against Buttler but couldn’t execute what he was trying to do. Buttler, who was shocked by the delivery chased it down outside the pitch and smacked it for a six after the second bounce.

After the match Buttler was impressed with his team’s performance speaking at the post-match press conference.

“We’ve played very well. Brilliant with the ball, good batting as well. There’s a lot of cricket coming up which is very exciting, we have great depth in this squad, very excited. Great debut for Payne, Brydon Carse looks exciting and Salt has also been impressive. Thank you to the Barmy Army for travelling to Amsterdam,” he said.

PM calls for nation to adopt ‘P2 to G2’ model