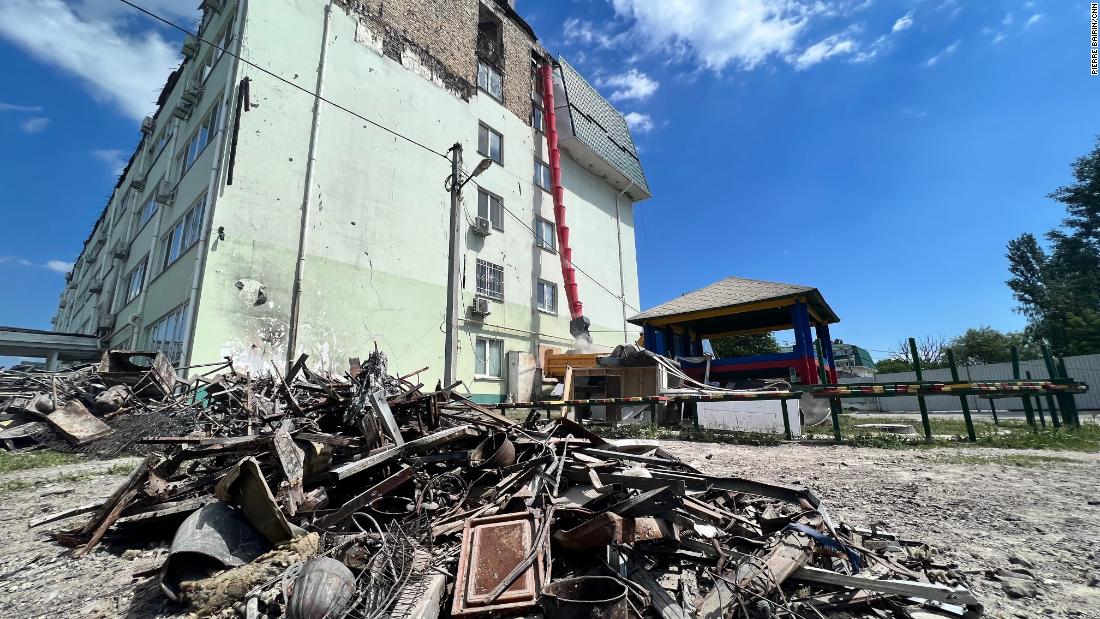 The workers quickly shovel mounds of rubble off the beige carpet and into wheelbarrows, then dump it down a makeshift chute. They leave only a dusty pile of children’s books before moving on to the next room.

With the roof mostly burned out of this apartment building on the outskirts of Kyiv, due to previous Russian strikes on the Ukrainian capital, the sun beats down on the volunteers as they work methodically to make the devastated homes livable again.

“I really feel we are unified now. We know Ukraine is our home and all Ukrainians understand we need to rebuild,” said Andriy Kopylenko, co-founder of the charity organization District 1.

It’s now 110 days since Russian troops invaded Ukraine. They initially attacked and occupied multiple Kyiv suburbs before the Kremlin withdrew its forces from around the capital to concentrate on the east of the country. Even as brutal street-by-street battles continue to rage there, residents in Kyiv say it is time to rebuild and return.

The city’s population dwindled from 4 million to just 1 million at the height of the conflict. Now it has swelled back to 3 million, according to local officials.

District 1 posted a call on social media for volunteers to join the clean-up operations. Hundreds of people signed up in a matter of days, quickly fanning out across the capital’s destroyed suburbs to clear debris and restore hope.

“We are all different, different age(s), different interest(s) but we work here together as one and this makes me feel good,” said volunteer Dimitri Niktov, a marketing manager in his daily life.

One of the charity’s projects aims to restore a six-story residential block in the tiny village of Myla, which lies just outside Kyiv. It became a front line in early March when Russian tanks barreled east toward the city, firing directly at the building with families still inside, according to residents.

Civilians were killed even as they fled and CNN teams witnessed bodies left strewn on the highway, some still lying by their vehicles.

“We were very scared and took shelter in the basement,” Popova recalled. “We called the fire service, but the Russian troops began to shoot at them, and they left. We sat and watched our houses burn.”

Russian forces withdrew completely from the districts around Kyiv by early April but left behind a trail of death and destruction. The atrocities shocked the world and sparked an ongoing investigation by Ukraine’s prosecutor general into thousands of alleged war crimes.

With Ukrainian President Volodymyr Zelensky’s government mired in the war along the eastern front, recovery efforts currently depend on volunteers stepping in to help.

“The army has a job, and we have a job too,” Kopylenko said. “This feels similar to being on a front line because when you are here, every day you are seeing people who were close to the war, and you are speaking to them. It is mentally very difficult.”

The recovery effort has also drawn in volunteers from around the globe, including Colorado native Karl Voll.

“I don’t have military experience, so I thought that I could contribute on the humanitarian side,” Voll said. “First there is the hands-on work I’m doing but there’s also just showing Ukrainians that people in other parts of the world care about them.”

But some in Kyiv worry peace is only temporary, and that Russian President Vladimir Putin may try to launch another assault on the capital.

“We know that it could happen again,” Kopylenko admitted. “Now we need to understand we are living beside a country that could start a war any day. But we need to live.”

With Russian artillery firing on the country every hour, just staying in Ukraine feels like an act of defiance. Millions of people who were forced out of their homes by the violence remain displaced, mostly across neighboring European countries.

Popova was the first to return to the damaged apartment building in Myla. Her home on the second story was largely spared.

“When I came back my windows were blown out and there was a lot of debris. (But) the roof and the upper floors were totally destroyed,” Popova said.

“But no matter how hard it is, there is no place like home,” she added. “When you are at home, the walls calm you down.”