Violence breaks out during final procession of Agnipath protest casualty 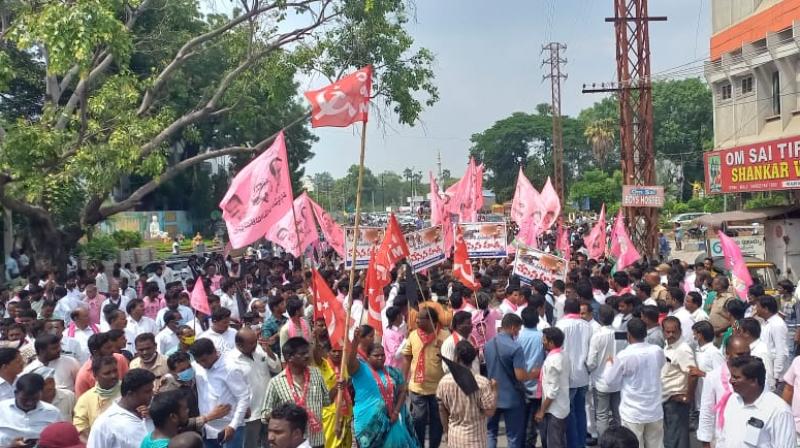 Warangal: A tense atmosphere prevailed in Warangal on Saturday as the body of Damera Rakesh (21), who died in the police firing that took place at the Secunderabad Railway Station to disperse a mob protesting the Agnipath armed forces recruitment scheme, was shifted from MG Memorial to Narsampet.

Over 3,000 political party leaders, youth organisation members and relatives took part in the procession under heavy police presence, after incidents of vandalism, effigy burning, violence and property damage marred Hanamkonda over the past two days.

Around 500 police personnel were on the streets on the day, with heavy deployment witnessed at bus stands, railway stations, cinema halls and other key public locations of Warangal, Hanamkonda and Kazipet.

Violence broke out during the procession as protesters started raising slogans against the Central government and rampaged at the BSNL office at Pochamma Maidan circle. They pulled out hoardings, pelted stones at glasses and broke the furniture in the front yard of the office.

As the police tried to take control of the situation, a heated argument broke out between them and the protesters. However, the detention of protesters quelled the violence.

TRS activists and youth leaders also tried to break into the Warangal Railway Station during the procession, but the police were prepared for the eventuality and contained the mob by lathi-charging those indulging in violence.

A few tyres of vehicles parked in front of the railway station were set afire, but protesters were barred from entering the premises. Those arrested were transferred to the Mills Colony police station.