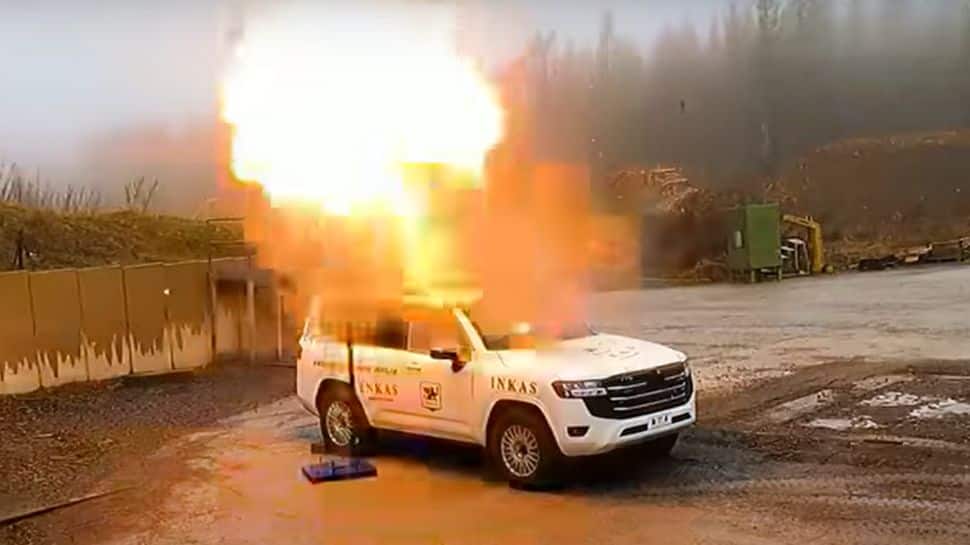 Often we hear people saying “built like a tank” when they are referring to a well-built car. But this Toyota Land Cruiser is actually built like one, and it’s probably being subjected to tests good enough to prove that. A video on Armored Vehicles Manufacturing’s YouTube channel demonstrates in a video the testing procedure a car has to go through during the R&D process. To give you a bird’s eye view, it has everything you imagined ranging from TNT to bullets.

The video of the Toyota Land Cruiser first shows the marks on the body of the SUV made by the bullets fired on it from various guns. To be exact, the SUV has been subjected to 78-rounds fired from different caliber guns. Moving on, the Toyota Land Cruiser is subjected to even more brutal testing using 4 DM51 grenades under the floor, 6 DM51 grenades on the roof, two land mines, and 15 kilograms of TNT from a distance of two meters.

These tests are pretty extreme when compared to what a normal car safety testing looks like. But even such explosives could only rock the vehicle a bit but were not able to intrude on the SUV or harm any of the passengers. It is to be noted that these tests are designed to be brutal to exceed what a vehicle might be subjected to in the real world.

Other than the Toyota Land Cruiser, the Inkas Armored Vehicles Manufacturing has armored other vehicles earlier like AMG G63 limo, BMW X7, Lincoln Navigator, and Infiniti QX80. In these vehicles, the company had to do extensive work ranging beyond body panels and thick glass.

Very often, when a vehicle like the land cruiser is armored, it often results in extra weight, which needs a bit of tuning with the other mechanics of the car like the engine, transmission, and the suspension to handle the added weight.