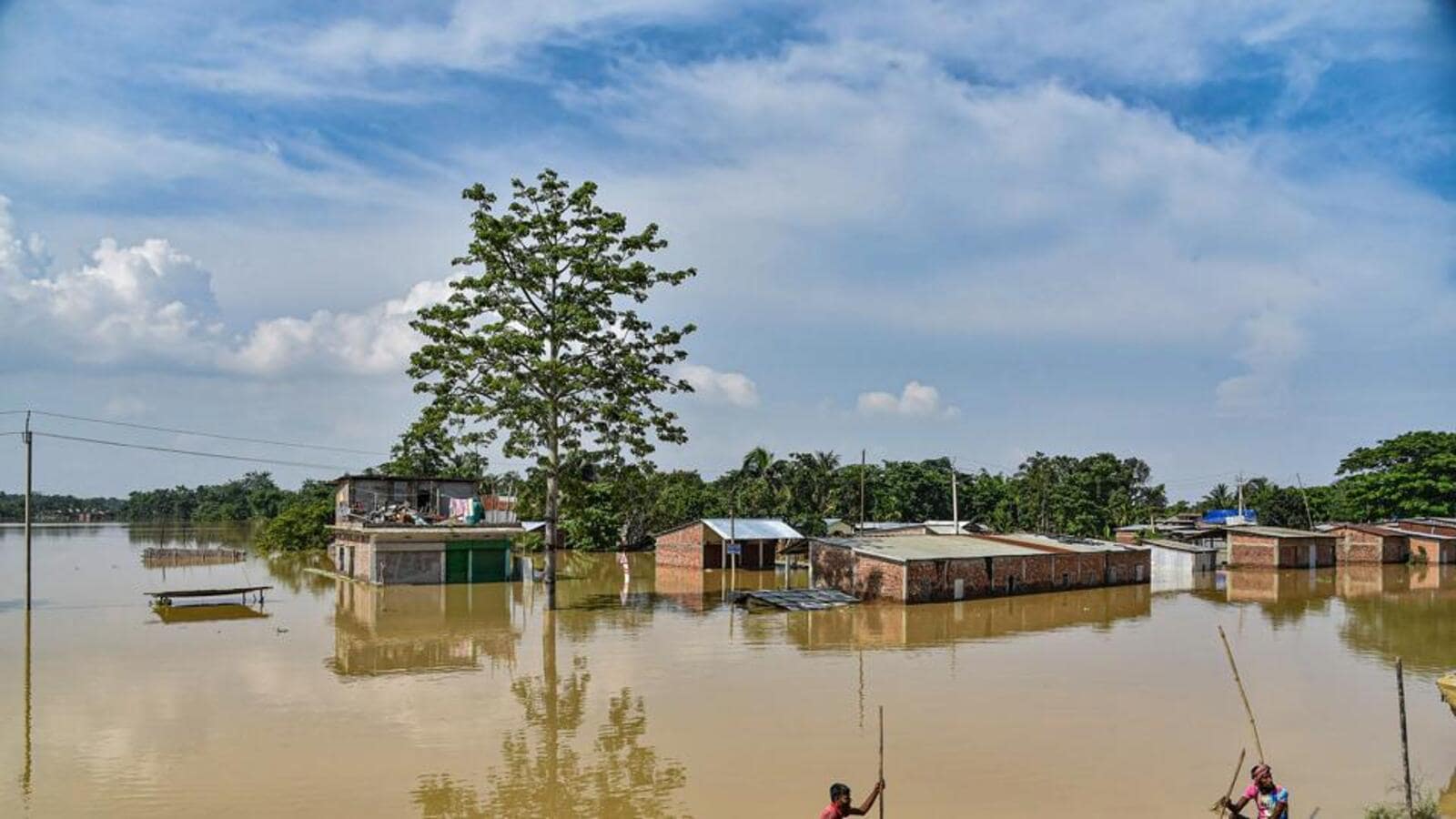 Guwahati Assam’s Silchar area remained inundated and cut off for the third day as the death toll in the state hit by floods rose to 108 since April, with seven more people drowning on Thursday, officials said.

Thirty of the state’s 35 districts were affected with over 4.5 million people suffering in the aftermath of flooding and 284,875 displaced from their homes, taking shelter in 1,395 relief camps, according to official figures. The situation remained particularly grim in Silchar in Assam’s Barak valley, where officials said nearly the entire city was “submerged under water”.

“Nearly 280,000 people in Silchar and other areas are affected due to floods. The entire down is almost submerged under water. Among the affected are our officers, workers, relief workers as well and that’s why we have not been able to provide optimum facilities. But despite the hardships, we have distributed 40,000 litres of water, 200,000 biscuit packets and 10,000 quintals of rice with lentils and oil,” Cachar deputy commissioner Keerthi Jalli said in a video message on Thursday morning.

The disaster prompted chief minister Himanta Biswa Sarma to travel to the area with senior administrative officials to conduct an aerial survey, promising a further impetus in relief and rescue operations. On Thursday, an Indian Air Force helicopter dropped food, water and other provisions in some areas of the town.

“Helicopters will bring 100,000 bottles of water and other essentials from Guwahati to Silchar daily. Engineers from the electricity department will also reach to repair and restore transformers that have been damaged due to floods,” Sarma said.

Debojit Shyam, a state government official, hasn’t been able to step out of his home in the New Market area of Silchar since Monday. The family’s house is under five feet of water and the six members including his aged parents have taken shelter on the first floor.

“Water started flooding our street around 8.30 on Monday morning. We quickly moved to the first floor with whatever essentials we could gather. Till now we have been surviving on the food stock that we had in our house. But there’s scarcity of drinking water. On Wednesday night, we collected rain water in plastic packets. I am waiting for more rain on Thursday evening. On Thursday, helicopters dropped some food and water in an adjacent building, but we are yet to get anything. Silchar witnessed flooding in 1985 and 2004 as well, but neither me nor my aged father have seen anything like this year’s deluge” the 45-year-old said on Thursday.

Officials said the flooding was exacerbated by damage to the Bethukandi embankment on the Barak river which flows six kilometres away from the city. “This was not a natural calamity, but a man-made flood. Bethukandi embankment has been damaged by people, leading to flooding in Silchar. We will take the strictest action against those involved in the act,” Sarma said.

The Assam State Disaster Management Authority (ASDMA) said some people may have broken parts of the embankment earlier this month in order to allow Barak waters from an earlier spell of floods in May to flow out. While attempts were made to repair the breach, they proved futile due to rainfall and rise in the water level of the river. “The action by the miscreants turned out to be counterproductive and it resulted in widespread flooding in Silchar. Many parts of the town are still flooded,” said GD Tripathi, CEO, ASDMA. An FIR has been registered by the Cachar police in this regard.

For residents, the last four days have therefore brought unprecedented hardship. SR Das, a 60-year-old resident of Chengkuri Road in Silchar, said his entire neighbourhood was battling scarcity of food, water, and electricity. Fourteen members of his family, including four children have shifted to the first floor of their home as the ground floor where they usually lived is completely under water. “They are facing an acute drinking water crisis at present. On Wednesday night, they managed to accumulate some rainwater for their use,” said Debaprio Deb Choudhury, Das’s son-in-law, a Delhi-based journalist working with HT.

“There’s no electricity from Sunday night and the inverter is not working since Monday. I haven’t been able to talk to them since Wednesday as their phones are switched off,” he added.

Transformers across the city have been damaged by flooding, and most areas have been without electricity for the past three to four days. Affected residents haven’t been able to charge their phones and poor network connectivity has prevented them from reaching out for help.