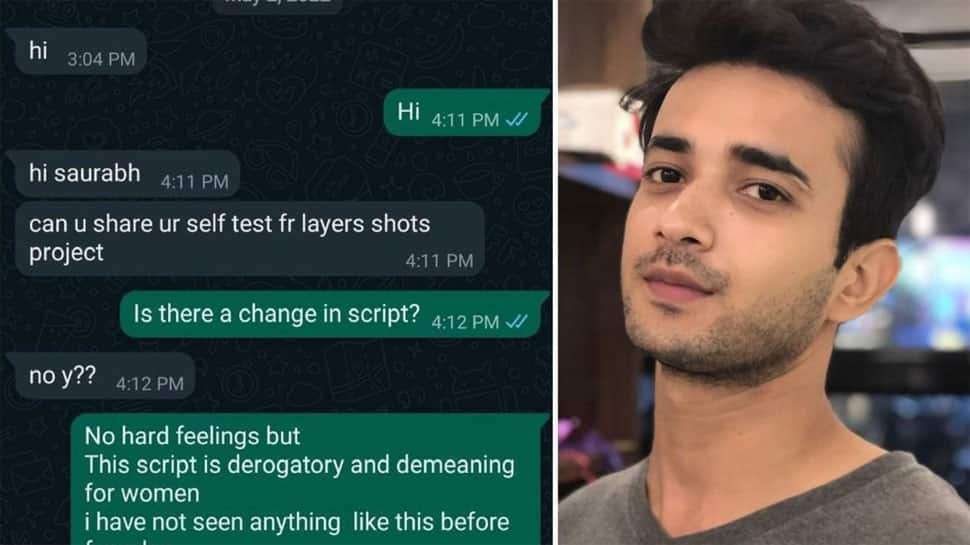 New Delhi: The highly controversial Layer’r Shot advertisement managed to irk netizens for its derogatory and demeaning commercial. The body spray’s ad first aired on June 4, 2022, and received a massive backlash for promoting ‘rape culture’ as it showed a group of 4 men talking about getting a shot (which they meant for the body spray) while a woman is shown to be checking out the product on display. This projection angered netizens to no end.

Days after the controversy, actor Saurabh Verma’s friend Abbas Mirza, who is a senior creative director of Kinnect, a digital marketing agency, as per his Linkedin profile, shared an inside story of his friend who said ‘NO’ to the now-banned ad.

Mirza heaped praises on his actor-friend Saurabh Verma, and went on to share is WhatsApp chats with the casting team where Verma had objected to the commercial being ‘demeaning to women’.

Many people commented on the post and hailed Verma for putting forth his opinion and turning down this ‘derogatory’ advertisement while others also thanked Mirza for sharing his friend’s story with the world.

After receiving a severe backlash, Layer’r Shot responded with a statement reading: “This is with reference to our recent two TV advertisements of Layer’r SHOT on various broadcasting platforms. We, the brand Layer’r SHOT would like to inform one and all that only after due & mandatory approvals, we have aired the advertisements, wherein, we never intended to hurt anyone’s sentiments or feelings or outrage any women’s modesty or promote any sort of culture, as wrongly perceived by some. However, we sincerely apologise for the advertisements that consequentially caused rage amongst individuals & several communities and beg their pardon. Most importantly, we have voluntarily informed all our media partners to stop the telecast/broadcasting of both the TV advertisements from 4th June with immediate effect.”

What followed was, the Information and Broadcasting Ministry urging Twitter and YouTube to remove the videos of the publicity from their social media platforms stating that it was ‘detrimental to the portrayal of women in the interest of decency and morality’ and violated Information Technology (Intermediary Guidelines and Digital Media Ethics Code).