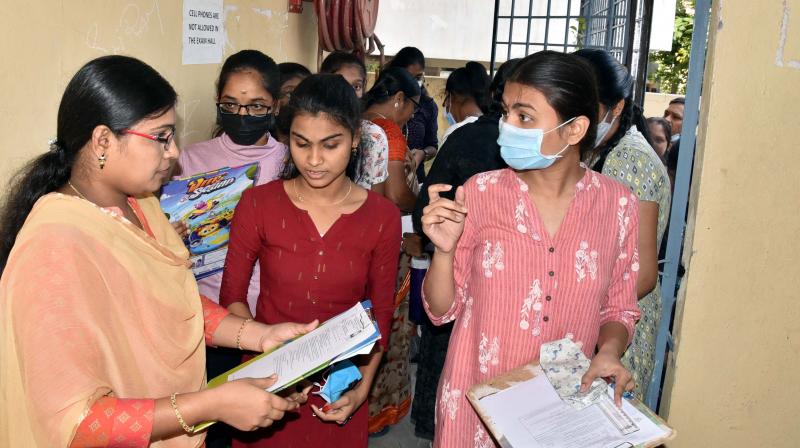 Hyderabad: School education department officials said that SSC Board examination results were likely to be announced by the end of the month, while principals of CBSE schools said that the Class 10 board exam results are expected in the next fortnight.

However, parents are anxious over junior college admissions, claiming that a few of them have already started classes.

Looking ahead at admitting their children in Intermediate,  parents said that many private junior colleges were claiming that they were 90 per cent full, to mint money.

“My child studied very hard for the Class 10 exams in order to secure a seat in a good college. However, colleges are collecting Rs 10,000 as admission fee and promising a seat to those who are ready to pay a lot of money. What is the use of writing a board exam,” said Anjana Dewadi, a parent.

Many colleges were conducting an entrance exam as well for admissions.

A student, I. Mahesh, who is preparing to give the entrance test to a private college, said, “It is tiring and adds a lot of stress as most of my friends have already taken admission in other junior colleges. I do not know if I will be able to get through this. I thought Class 10 marks are enough to secure me a seat in any junior college.”

Parents said that some colleges collect a seat reservation fee but do not refund the same in case their ward has not cleared the board exam. “The colleges say that they already allotted a seat to the student and missed on others who were ready to pay more for the same seat,” said Vaishali Oza, a parent.

P. Madhusudhan Reddy, president of the Government Junior Lecturers’ Association, said that junior colleges are not allowed to conduct entrance exams. “Junior colleges were supposed to take admissions only through Class 10 results. The government has to take immediate action against them,” he said.