Home Sports LeBron: On me to pick Lakers up with AD out
Sports

LeBron: On me to pick Lakers up with AD out 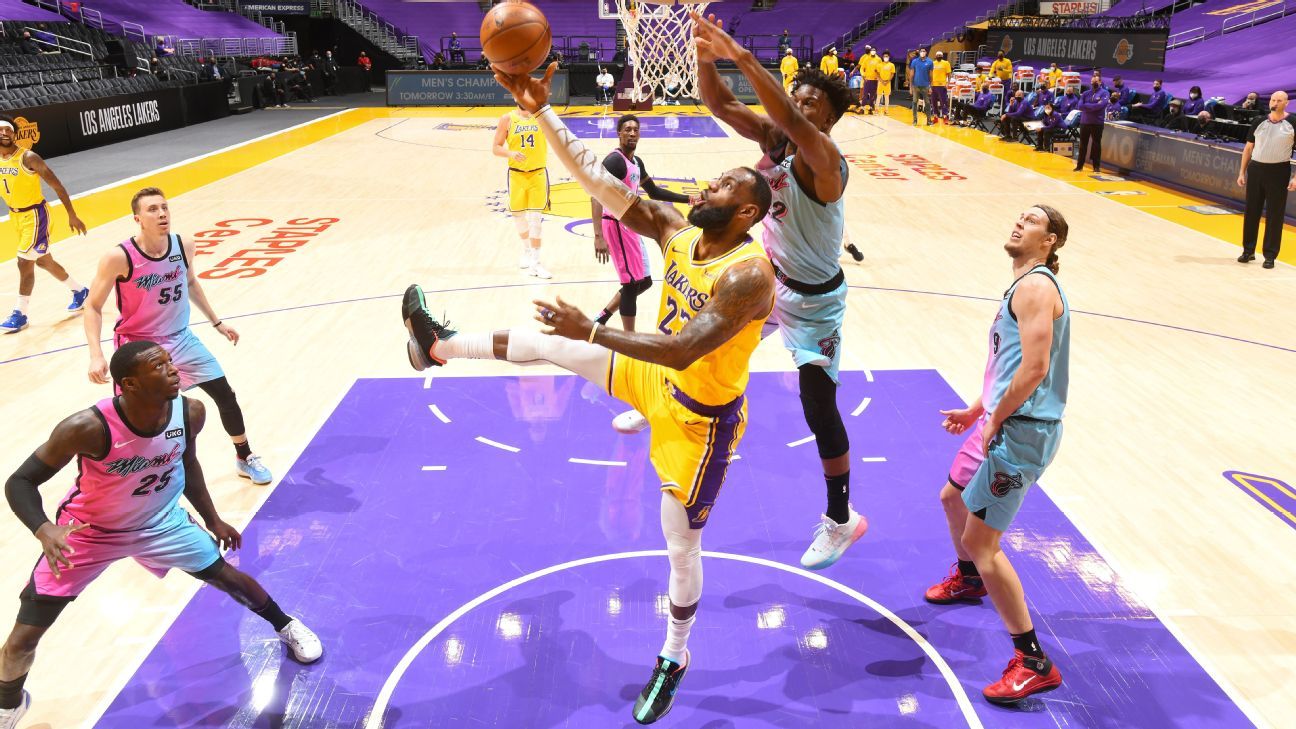 LOS ANGELES — The Los Angeles Lakers have hit the first true challenge of their title defense, with Saturday’s 96-94 loss to the Miami Heat marking the third defeat in their past four games since Anthony Davis aggravated his Achilles tendinosis and suffered a calf strain in his right leg.

“I feel like the last couple games that’s been happening, putting a lot on Bron,” Lakers guard Kentavious Caldwell-Pope said after the game. “We already know what we’re going to get out of him. So all the rest of us, we’ve got to continue to just play hard and just play basketball and not worry about anything else.”

James scored 19 points on 7-for-21 shooting against the Heat (including just 1-for-8 from 3-point range), accounting for his worst shooting percentage of the season. He also coughed up a team-high five turnovers.

James, after stealing an inbounds pass intended for Jimmy Butler with 5.4 seconds left in the contest and setting up Alex Caruso for a potential game-tying shot that missed, insisted his teammates don’t need to pick up any more slack while Davis and starting point guard Dennis Schroder are sidelined.

No, James said it’s on him to lead L.A. out of the rough patch it’s in, as he has done for the majority of his 18-year career with the Cleveland Cavaliers, the Heat and now the Lakers. Saturday’s loss dropped the defending champions to No. 3 in the Western Conference standings.

“I think that’s what it all boils down to, and right now is another challenge for me, to be able to adjust,” James said. “Not having AD for a long period of time is something that we haven’t had over the last year and a half, and now it’s time for me to adjust again and see ways I can be even more effective to help this team win ballgames. Because that is the sport that we’re in.

“We’re in the winning business, and I’ve always been a winner. So, it’s time to click into that.”

James wasn’t the only one to struggle shooting the ball against Miami. The Lakers went 1-for-13 from 3-point range in the fourth quarter and didn’t fare all that much better for the game, hitting 13-of-45 attempts (28.9%) from the outside.

“We try to help him out as much as possible, and we want to do it as perfect as possible, as we can,” said Caldwell-Pope, one of only three Lakers to make more shots than he missed against the Heat. “We try to help him out, we try not to make too much mistakes when we’re on the floor with him or even running a play with him, just to give him some help. We do ask Bron for a lot; he gives us a lot each and every game.

“It’s up to us as far as like role players and ‘next man up’ mentality, we’ve got to be ready and locked in.”

Caruso, who is 10 years younger than James, said being mindful of not burning out James in February with a championship run planned for the spring and early summer is a “conscious thing” for his teammates.

“I mean, LeBron is the best player on our team, and night in and night out you can see attention he gets because he is,” Caruso said. “With the guys that we got out, teams are going to load up against him. He has a great basketball mind, and he’s going to do his part to get guys open to make great plays.”

For James, who rallied in support of his team by saying, “Every time we’re on the floor, we’re all trying to protect each other and bring each other up out on the floor every single night,” there was one minor critique of a teammate he did share, however.

Down by two points with 1.4 seconds left in the game, he said he wished Caruso would have taken a couple of steps back to launch a 3 and go for the win.

“I think the only bad thing about it is that he shot a long 2,” James said of Caruso’s 22-foot shot that hit the front rim at the buzzer. “I wish he would have shot a 3 and, make or miss, I’ll live with that.”

Manchester City players celebrate during their win against Gladbach. GettyManchester City extended their winning run in all competitions to 19 games as they comfortably...
Read more
Sports

IBPS Releases CRP PO/MT-X Interview Admit Card on Official Website, Candidates Can Download it On or Before March 13

Coronavirus: A major program to study Long COVID in progress – Times of India

MSME Sector At The Forefront As Growth Engine Of Economy, Says RBI Governor