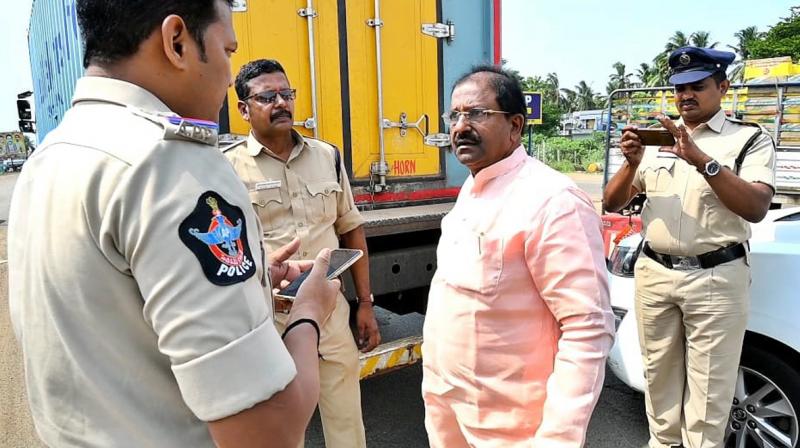 Vijayawada: BJP state president Somu Veerraju was booked on the charge of obstructing a police officer from discharging his duty and of intimidation. The case was filed by the police of Alamur in Konaseema district on Wednesday.

The BJP leader was proceeding to Amalapuram in his vehicle from Rajahmundry to meet a party activist and console him in connection with the recent violence there. The police stopped his vehicle at Jonnada Junction by blocking the road with a big private vehicle. Cops advised him not to proceed as Section 144 of CrPC and Section 30 of the Police Act, were in force in Amalapuram.

A heated argument took place between Alamur SI Sivaprasad and the BJP chief. Veerraju said he was on his way to meet a party activist and had no intention to hold any public meeting or provoke anyone against the government. However, the police said they were having orders from their seniors to block his way to Amalapuram. The argument continued for some time.

The BJP chief later proceeded to Ravulapalem and from there reached Vijayawada. Based on a complaint from the Alamur SI, police booked Veerraju.

Meanwhile, the BJP chief spoke to the media at Ravulapalem and slammed the police for “becoming puppets in the hands of the YSR Congress government.” He also criticised a section of the IAS and IPS officers for their efforts “to safeguard the political interests of some people.”

He said the liberty of the people to move freely was being eroded in the state under the YSRC rule.