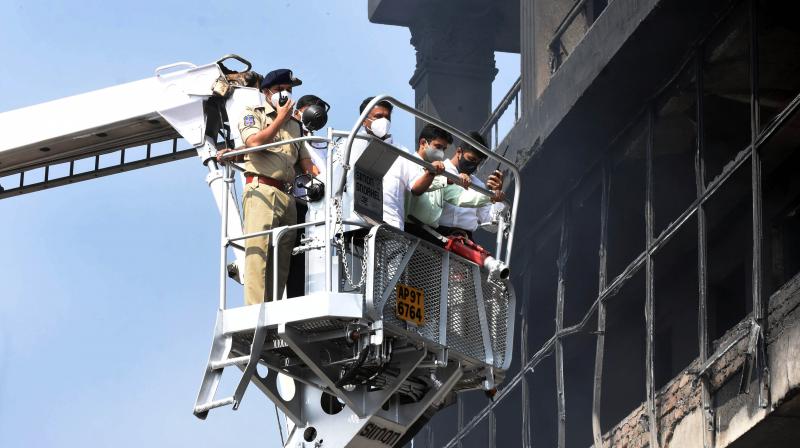 Hyderabad: The suspected death of three persons in a fire at a sports clothing shop on Minister Road in Secunderabad has hit a Gujarat-based family hard, with all the victims identified to be members of an extended family.

The police has identified Junaid, Zaheer and Mohammed Waseem, all from Veraval-Somnath in the Gir Somnath district of Gujarat, as suspected to have died in the blaze. While the charred remains of one of them were found on Sunday, efforts are on to locate the other two.

Mohammed Imran, a family member, who came to Hyderabad on Saturday, said, “Mohammed Waseem is my younger brother, while Junaid and Zaheer are my cousins. We all come from the same place. We received a call about the fire accident from Azhar, one of Waseem’s friends and rushed to Hyderabad. The police informed us that they will collect DNA samples from our families and match them with those from the remains found.”

G. Lingeshwar Rao, the station house officer of Ramgopalpet police station, said the remains were shifted to the Gandhi Hospital morgue, and FSL (forensics) officials have collected samples for DNA typing and matching with the three separate families, whose relatives are missing since the fire broke out on Thursday morning.

The police said that the person whose remains were found on Saturday may have entered the building after the fire started, trapping him.

The blaze, which broke out on Thursday morning, was yet to be completely put down as fabrics and other flammable materials continued to burn on Saturday.

Meanwhile, central zone DCP M. Rajesh Chandra said bones were recovered from the building during an inspection by officials from the revenue department including the Hyderabad collector, the police, and the fire department.

He also said that based on expert opinion that the building could collapse anytime, owners and tenants of neighbouring buildings and houses, were asked to vacate their premises until further notice.