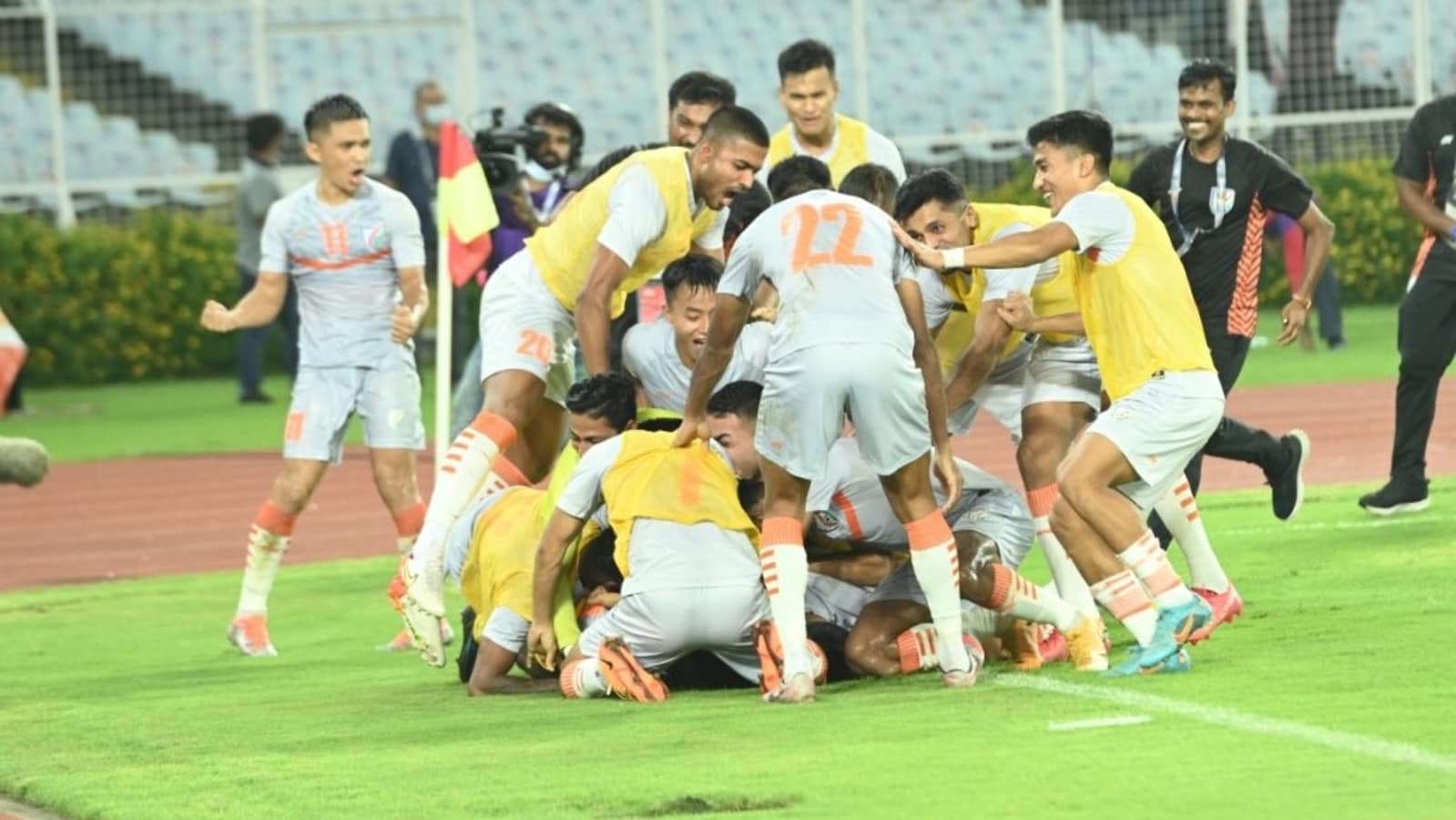 The trend of late goals in India-Afghanistan games continued, the twist to the tale being Sahal Abdul Samad’s 91st minute strike that gave the hosts a 2-1 win at Salt Lake stadium on Saturday. After 86 minutes of a bruising game which India dominated but had nothing to show for, Sunil Chhetri, who completes 17 years in international football on Sunday, fired India ahead with a free-kick.

He doesn’t take them anymore, letting Brandon Fernandes, Liston Colaco and even Roshan Naorem to do that. But Fernandes hadn’t started so Chhetri fired one in the first half. When another opportunity came, after Ashique Kuruniyan—the first among equals for India on Saturday night—won the free-kick, Chhetri took one step and flighted it over the wall for his 83rd international goal. Just as these games tend to pan out, Afghanistan equalised in the 88th through Zubyar Amiri after India left the near post unmarked.

Chhetri was supplanted by Samad in the 89th minute and again Kuruniyan turned provider, his pass finding Samad in space. Samad fired an angular delight that had coach Igor Stimac hugging his staff and the goal-scorer finding himself under a pile-up of grey shirts.

This was India’s first win against Afghanistan under Stimac and they are now assured of finishing second in group D.

The rigours of playing three games in six days had both teams ringing in the changes. For India it looked strategic too as Stimac opted for midfield solidity with Jeakson Singh replacing Anirudh Thapa and banking on Kuruniyan’s pace even at the expense of Brandon Fernandes’ ability to influence games through set-plays. Including goalkeeper Ovays Azizi, Afghanistan made five changes to the team that lost 1-2 to Hong Kong.

Kuruniyan’s pace caused Afghanistan problems. Akash Mishra, Liston Colaco and Kuruniyan formed neat triangles on the left which helped India get to the byline regularly but Afghanistan managed to block them. It led to a slew of corner-kicks, one of which Jeakson headed over. On the right, Manvir Singh’s industry meant India could stretch the play but for all the domination, the clearest chance was a Roshan Naorem effort that tested Faisal Hamidi.

Soon after, Jeakson was in space after smart play from Colaco but took one touch too many. Another ball from Manvir found Chhetri but not for the first time did Haroon Amiri deny him. Amiri did that again in the 50th minute when, after Manvir had done well to head back Kuruniyan’s ball, the Afghan defender denied Chhetri a proper connection.

Used centrally to accommodate Kuruniyan, Colaco had Afghanistan fouling him and conceding free-kicks in dangerous areas. But despite having central defender Sharif Mukhammad pulling out with a muscle injury, they had held on. Fernandes’ ballooning a Kuruniyan pull back could have been costly had Gurpreet Singh Sandhu, who was involved in a fracas after the final whistle, not pulled off a reflex save in the 74th minute to deny Zubayr Amiri.

Hong Kong beat Cambodia 3-0 to increase the pressure on India going into their match on Tuesday. Matt Orr was on target again with a snap shot in the 18th minute. Sun Ming Him made it 2-0 in the 22nd with a header. Substitute Chan Philip’s flying header made it 3-0 in the 63rd.