RR owner gets EMOTIONAL after watching Jofra Archer in MI colours in SA 20, says ‘Doesn’t feel right to see you in another kit’ 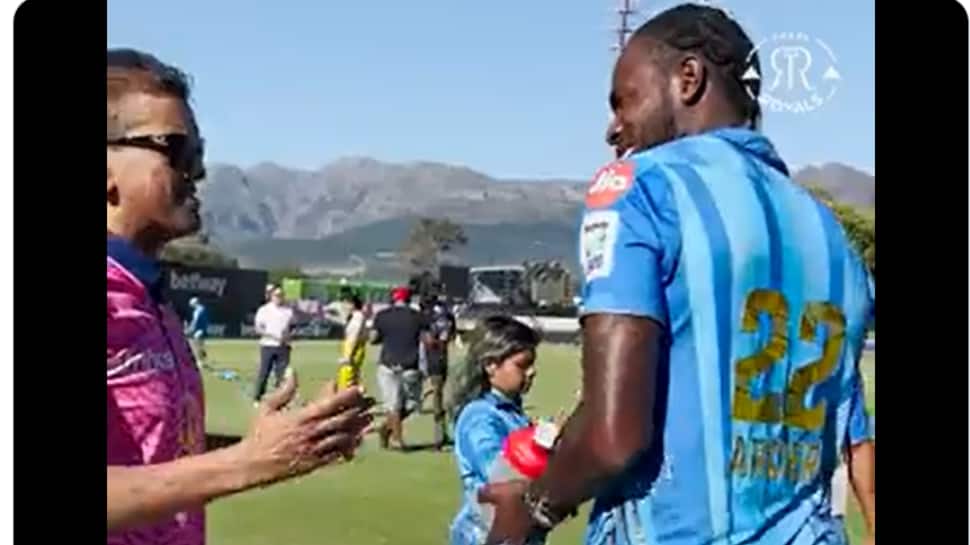 Rajasthan Royals owner, and chairperson of Royals Sports Group Manoj Badale became emotional on Saturday (January 22) when MI Cape Town played Paarl Royals in SA 20 League contest at Paarl. Badale met former Rajasthan Royals player Jofra Archer on the sidelines and hugged him. Right after the hug, Badale told Archer: ‘Doesn’t feel right to see you in another kit’. Archer was signed up by MI Cape Town to play in the inaugural edition of the league. Last year, he was signed by Mumbai Indians in IPL 2023 and if all goes right, Archer and Jasprit Bumrah will be bowling together in the 16th edition of the Indian Premier Legaue for MI.

Badale, who has been with the RR for many years now, was someone who was influentials in bringing Archer to the camp. The video was shared of their meeting by Rajasthan Royals on their Twitter.

SA 20 is the first tournament that Archer is taking part in more than one year. He has been struggling with injuries for more than 2 years now. He has had his struggled with his arm, which was operated last year. He then resumed returning to the field with some bowling in the nets late last year. And in SA 20, he looks to be in same touch again. Archer missed the ICC Men’s T20 World Cup 2023 and several other important assignments for England.

He wants to get back in same rhythm before an important year as the ICC ODI Men’s World Cup is scheduled to take place in India later this year. He will also want to pay back the faith that Mumbai Indians have showed in him by picking him at IPL 2022 February auctions despite knowing the fact that he may be not available for a full season.