Rahul Gandhi ED Appearance: After Request by Rahul, ED Gives Him Day Off on Thursday; Summoned on Friday 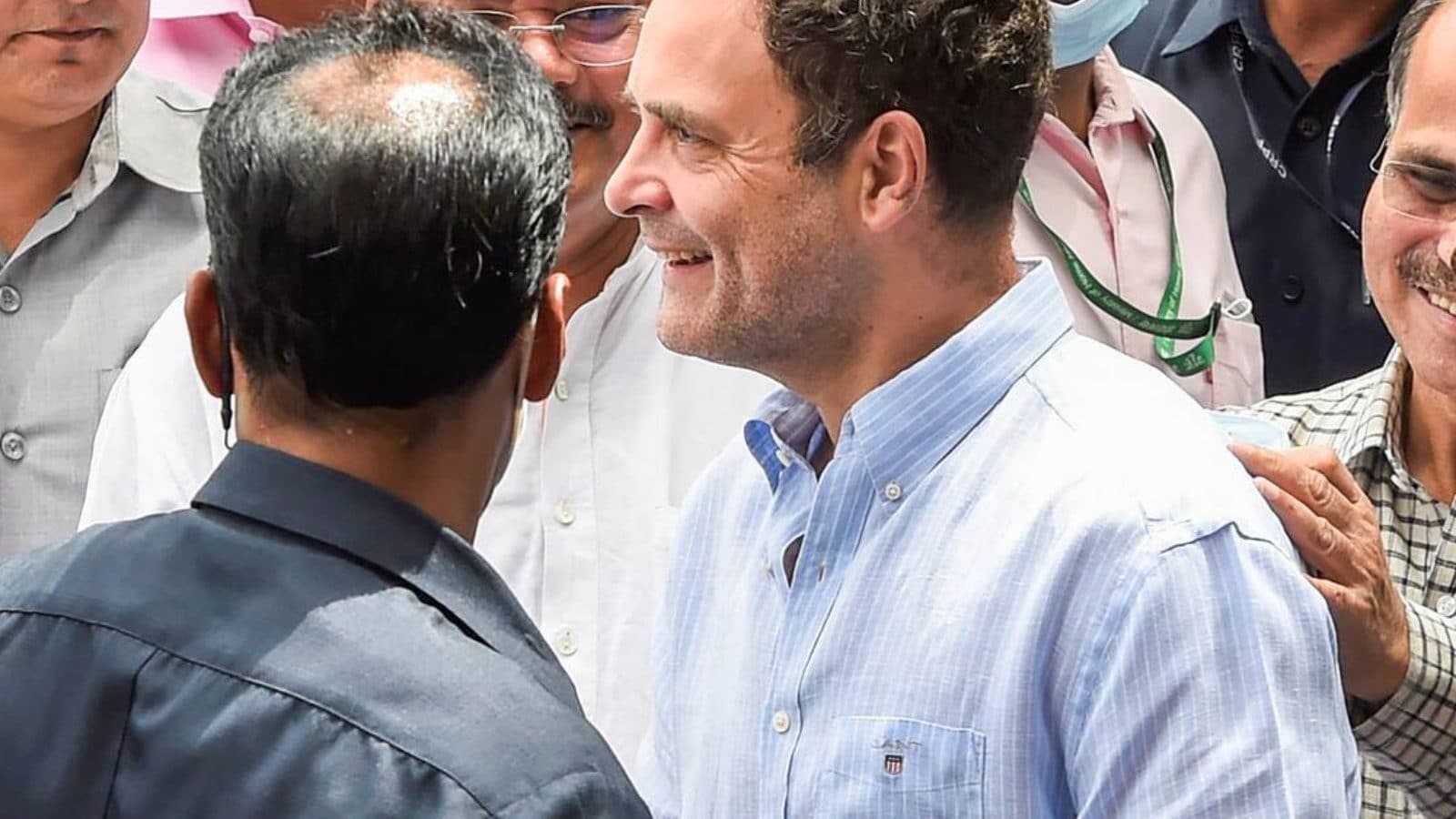 Delhi Pradesh Congress workers also staged a protest outside the heavily barricaded ED office against party leader Rahul Gandhi’s questioning by the probe agency in the National Herald money laundering case. The protests were taken out as Gandhi reached the ED office for questioning for the third consecutive day.

A strong posse of the police force, supported by paramilitary personnel, stopped the Congress workers and whisked them away. Among those detained are a number of women and youth workers of the party, including IYC chief B V Srinivas and Delhi Congress chief Anil Chaudhary.

Chaudhary alleged that section 144 of the CrPC has been imposed in the area on instructions of the BJP. Congress MPs Manickam Tagore, Thirunavakkarasuar, A Chella Kumar, Amar Singh and Jayakumar Vijay Vasanth protested in the Parliament complex and raised slogans against the government.

Tagore said they had come to the Parliament complex as they were not allowed to enter the AICC office by the police. The MPs wanted to protest near the Mahatma Gandhi statue against the “torture” and questioning of Rahul Gandhi by the ED in a false case, he said. The MP, however, alleged that they are not allowed to stage a protest. He said the police were acting as BJP agents.

“What is happening in the country. Have we become a Banana Republic? Is this democracy? The Constitution is being violated,” senior Congress leader Adhir Ranjan Chowdhury said. Accusing the police of high-handedness, the Congress Lok Sabha leader said they entered the AICC office and beat up Congress workers. He claimed that the police would have caused a havoc had the media not been there.

“Our workers are being beaten up mercilessly,” Chhattisgarh Chief Minister Bhupesh Baghel said, cautioning the BJP. The police have put up barricades around the AICC office here and workers were prevented from entering the party office.

Congress leaders claimed this was the first time in the country that party workers were not allowed to enter the AICC office. Prohibitory orders have been imposed in central Delhi since Monday, banning the assembly of more four or more people.

The BJP on Tuesday hit out at the opposition party, saying it is blocking roads to show its “leaders are above the law” and termed the protests “drama”. “When lawful action is taking place in a case of corruption, Congress is doing this drama and blocking roads… it shows the party considers its leaders above law,” BJP’s national spokesperson Sambit Patra said.

Union minister Anurag Thakur also took a swipe at Rahul Gandhi over his questioning by the ED after the Congress leader criticised the prime minister’s decision to provide 10 lakh government jobs in the next 18 months. “I would only say to Rahul ji, you should first provide the right answers to the ED on the serious charges of corruption made against you,” the BJP leader told reporters.

The Congress, however, accused the BJP of conspiring to defame the Gandhi family and the party by destroying their credibility through a “false” money laundering case being pursued by the Enforcement Directorate. Congress general secretary and chief spokesperson Randeep Surjewala claimed that the Centre is scared of Gandhi’s politics as he is raising issues concerning the public.

“This entire exercise is illegal, unconstitutional, malicious and an exercise by a prime minister burning in the fire of political vendetta,” Surjewala told a press conference here. The Congress had alleged that its leaders were manhandled by police during Monday’s protest as they tried to walk to the ED office.

All approach roads leading to the agency office were made out of bounds on Tuesday for the public as prohibitory orders were imposed and barricades put up. A large posse of police personnel including from the central anti-riot police force RAF and Central Reserve Police Force (CRPF) were deployed.

Among the other leaders detained were Randeep Surjewala, Jairam Ramesh, Gaurav Gogoi, Deepender Singh Hooda, Ranjeet Ranjan, Jeby Mather, Imran Pratapgarhi, Youth Congress chief B V Srinivas and National Students’ Union of India (NSUI) chief Neeraj Kundan, with some of them even roughed up. Venugopal said this is nothing but “political vendetta” by the Modi government, which is trying to defame the Congress leadership through “false cases”.

“They can imprison us but they cannot imprison the truth. The fight for the truth shall go on,” he added. Officials said Gandhi has been called again on June 15 as the questioning and the recording of a statement are taking a long time.

While agency sources informed that Gandhi recorded his statement and checked its transcript minutely, Congress leaders claimed that the investigators took multiple breaks during his questioning on Monday. The investigating officer of the case, an assistant director-rank ED officer, is expected to continue the questioning related to the incorporation of the Young Indian company, the operations of the National Herald newspaper, the loan given by the Congress to AJL and the fund transfer within the news media establishment.

The probe pertains to alleged financial irregularities in Young Indian Private Limited, promoted by the Congress, that owns National Herald. The newspaper is published by Associated Journals Limited (AJL) and owned by Young Indian.
Gandhi’s mother and Congress president Sonia Gandhi, who is currently admitted to a hospital here due to Covid-related issues, has also been summoned by the agency for questioning in the case on June 23. This is the first time that any member of the Congress’ first family is being questioned in a criminal case.

Priyanka Gandhi’s husband Robert Vadra was questioned by the ED in a money-laundering case linked to an alleged land scam in Rajasthan a few years ago.
The Congress has accused the Centre of targeting opposition leaders by misusing investigative agencies. Putting across its version, the party has said AJL, which was established in 1937, faced huge debts and the Congress, from 2002 to 2011, gave Rs 90 crore to the National Herald newspaper to pay the salaries of the journalists and staffers who worked there.

The ED questioned senior Congress leaders Mallikarjun Kharge and Pawan Bansal in April as part of its probe. Kharge has claimed that he gave “evidence” to the agency during the recording of his statement. The questioning of the senior Congress leaders and the Gandhis is part of the ED’s investigation to understand the share-holding pattern, financial transactions and role of the promoters of Young Indian and AJL, officials had said.

The ED recently registered a fresh case under the criminal provisions of the PMLA after a trial court here took cognisance of an Income-Tax department probe against Young Indian on the basis of a private criminal complaint filed by BJP MP Subramanian Swamy in 2013. Sonia Gandhi and Rahul Gandhi are among the promoters and shareholders of Young Indian.

Swamy had accused Sonia Gandhi, Rahul Gandhi and others of conspiring to cheat and misappropriate funds, with Young Indian paying only Rs 50 lakh to obtain the right to recover Rs 90.25 crore that AJL owed to the Congress. In February last year, the Delhi High Court issued a notice to the Gandhis for their response to Swamy’s plea, seeking to lead evidence in the matter before the trial court.

The Gandhis had secured separate bails from the court in 2015 after they furnished personal bonds of Rs 50,000 and one surety. They, however, had contended in the high court that Swamy’s plea was “misconceived and premature”.

The other accused in the case filed by Swamy are the Gandhis’ close aides Suman Dubey and technocrat Sam Pitroda. Both have denied any wrongdoing.

Semiconductor Exports to Russia Said to Have Plunged by 90 Percent