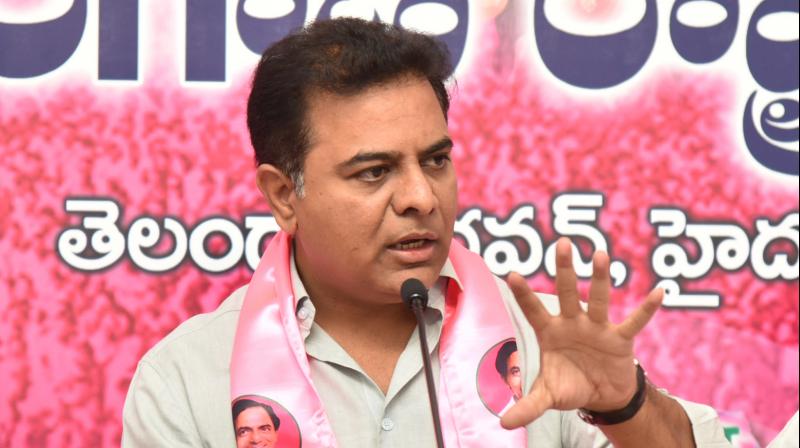 HYDERABAD: TRS working president and IT minister K.T. Rama Rao on Friday said the violent protests against the Agnipath scheme were an acute indicator of the magnitude of the unemployment crisis in the country.

In a tweet, he said, “The violent protests against #AgniveerScheme is an eye-opener & acute indicator of the magnitude of unemployment crisis in the country Pehle Desh ke Kisan Ke Saath ??????? Aur Ab Desh ke Jawan Ke Saath ??????? From One Rank – One Pension to proposed No Rank – No Pension!(sic)”.

Later in a media statement, Rama Rao said the Agnipath scheme was killing the aspirations of millions of youth who wanted to join the armed forces and serve the nation. Without any consultation, the BJP government at the Centre took a unilateral decision, he alleged. He stated that the farmers were not consulted before introducing farm laws, traders were not consulted before bringing in the GST, citizens were ignored during demonetisation, and the minorities were ignored when CAA was proposed.

He stated that the BJP at the Centre was trying to privatise the military of the country which showed their inefficiency in governance. Rama Rao stated that 75 per cent of the youth who would join the army through the Agnipath scheme would become unemployed at the end of the fourth year. He questioned what would happen to the youth who finished a four-year career in the army and came out.

Dismissing the Centre’s claim that the youth, after completing four years, would get jobs in private firms, Rama Rao said no citizen in the country would believe the words of Prime Minister Modi after he failed to deliver his promise of two crore jobs every year.

This scheme would affect the youth coming from rural areas who aspired to join the defence forces, he said. He stated that this controversial scheme would disturb the organisational culture, traditions and values that had kept the defence services at the highest pedestal for decades.

Rama Rao said the Centre was negatively affecting the spirit of the armed forces by taking such decisions at a time when the neighbouring countries were posing a threat to the security of the country. He added that this was a cheap attempt made by the BJP government to save the pension money which was given to the retired officers.

Rama Rao demanded that Prime Minister Narendra Modi respond to these protests and also make his stand public to clear the doubts of the unemployed youth.

He added that the TRS understood the agony of the protesters.