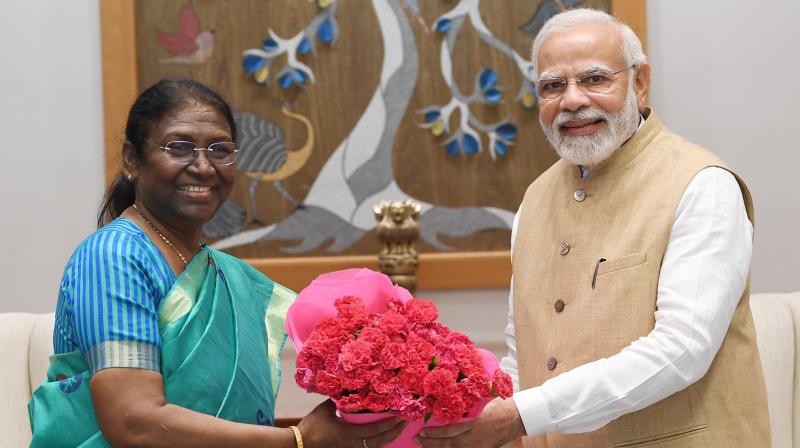 New Delhi: Prime Minister Narendra Modi, according to reports, will be the first proposer during the nomination filling of the BJP-led NDA’s presidential candidate Droupadi Murmu. The 64-year-old tribal leader from Odisha is pitted against former Union minister Yashwant Sinha, the candidate of the Opposition camp.

The NDA nominee, who met Mr Modi, Union home minister Amit Shah and Vice President M. Venkaiah Naidu on Thursday, is likely to file her nomination today. Her nomination papers were being prepared at the home of parliamentary affairs minister Pralhad Joshi.

With the backing from the majority of the electoral college, Ms Murmu will be the first tribal to be the President of India and the second woman to occupy the post.

After meeting Ms Murmu, the PM tweeted, “Met Droupadi Murmu Ji. Her presidential nomination has been appreciated across India by all sections of society. Her understanding of grassroots problems and vision for India’s development is outstanding.”

Mr Shah, after meeting the NDA presidential nominee, said, “The tribal society is feeling very proud by the announcement of her name.”

Mrs Murmu will meet with a number of senior political leaders before embarking on a nationwide campaign to rally support from various political parties.

NDA ally JD(U) has announced their support for the NDA candidate.

Odisha chief minister Naveen Patnaik, who has appealed to all MLAs of the state to support the daughter of the soil in the July 18 presidential polls, said two of his cabinet colleagues will be present when Ms Murmu files her papers.

“BJP president Shri @JPNadda Ji spoke to me about the filing of the nomination of Smt #DraupadiMurmu Ji for #PresidentElections. My cabinet colleagues Shri @saraka_fan and [email protected] will sign nomination papers today and attend the event tomorrow,” the BJD chief, who is currently on an official foreign tour to Italy, said on Twitter.

When she files her nomination paper for the country’s top constitutional post, Ms Murmu will be accompanied by senior BJP leaders, including Union ministers and chief ministers of BJP-ruled states, as well as senior representatives of NDA allies.

Besides, at least 10 of the BJP’s 22 MLAs in the Odisha assembly will also remain present during her nomination.

According to the Akhil Bhartiya Vanvasi Kalyan Ashram (ABVKA), an RSS affiliate, the NDA’s decision to nominate Ms Murmu, from the Santhal community, is “historic”.

In a statement, it said the tribal society had suffered neglect for years despite being an integral part of Indian tradition and culture. The country is home to over 12 crore tribals. ABVKA stated that Ms Murmu’s nomination as the NDA candidate is a move towards bringing social change and called on all parties to support her nomination and elect her unanimously.

Welcoming the NDA’s decision to nominate Ms Murmu as the presidential candidate, Madhya Pradesh chief minister Shivraj Singh Chouhan in Bhopal said, “A tribal sister will be occupying the country’s highest constitutional post. It is a matter of pride for all of us.”

In a brief statement issued before she took her flight to Delhi, Ms Murmu said, “I thank all and seek cooperation from everyone for the presidential election. I will meet all voters (lawmakers) and seek their support before July 18.”

She had reached the Odisha capital from her home in Rairangpur town in Mayurbhanj district on Wednesday night after covering a distance of 280 km by road amid cheers and greetings from people along the way.

“People of the country love my mother for her simplicity and soft-spoken nature. She has left to serve the country after handing over the responsibilities of the family to me,” her daughter Itishree Murmu told reporters at the airport.

In Delhi, befitting her status as the NDA’s nominee for president, several Delhi BJP leaders, including state president Adesh Gupta, party MPs Manoj Tiwari and Ramesh Bidhuri, Leader of Opposition in the Delhi Assembly, welcomed her at the airport.