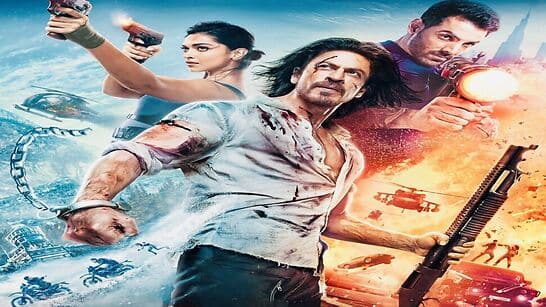 King Khan returns to the silver screen with a boom as Pathaan has smashed box office records left right and center Srk with Pathaan has made a smashing comeback after 4 years as the film has done tremendous business on its first day at the box office worldwide. Shah Rukh Khan and Deepika Padukone’s action thriller released on Wednesday 25 Jan, a day ahead of Republic Day, with great hype, and as a result, it has set cash registers ringing. Moviegoers everywhere were eager to see the movie. As images from theatres have started going viral on social media, the audience has responded thunderously to Siddharth Anand’s film.

Pathaan has garnered a fantastic reception not only at the domestic box office but in international markets as well. Shah Rukh Khan has one of the biggest international fan base and it has resulted in some big box office numbers. According to the reports, the action thriller movie therefore has collected around Rs 100 crores at the worldwide box office on its first day

Smashing box office records, the Shah Rukh Khan led film has reportedly raked in around Rs 100 crore worldwide on just its first day. The film debuted at number one in the UAE and Singapore as well. Aside from that, Pathaan reportedly managed to cross $1 Million in the USA by Wednesday afternoon itself.

No.1 debut in UAE and Singapore @iamsrk rules the

Shah Rukh took a break from movies after the average performance of “Zero”. In between, the actor has only made cameo appearances in R Madhavan’s Rocketry: The Nambi Effect (Hindi version) and Ayan Mukerji-directed blockbuster Brahmastra Part One: Shiva. Pathaan is Srk’s first full fledged role after 4 years.  Directed by Siddharth Anand, Pathaan also features Deepika Padukone and John Abraham in the lead.