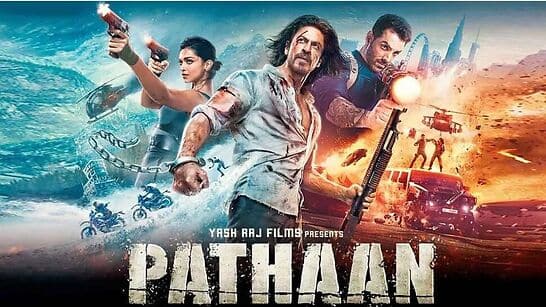 Bollywood actor Shah Rukh Khan’s comeback movie, “Pathan,” is just a few hours away to hit theatres. The movie will release tomorrow, 25 Jan however the film’s creators have had sleepless nights as a result of the recent reports. According to Zoom Tv report websites such as Tamilrockers, Filmy4wap, Filmyzilla, Mp4movies, Pagalworld, and Vegamovies have leaked Shahrukh Khan’s “Pathan” ahead of the release.

Reports claim that HD print of the film ‘Pathan’ is available on these websites. In this case, individuals who were eager to see the movie can now do so while sitting at home and it can impact the buzz of the movie. The news of the film getting leaked online has increased the concern of the makers. Trade experts also believe that if the film is leaked online, it will have a significant impact on its box office figures. Makers can take strict action against the websites on which the film has been leaked.

A few days ago the trailer of Shah Rukh Khan starrer ‘Pathan’ was also leaked and now the film’s leak has created a stir all around. ‘Pathan’ is available on online sites. Earlier, Pathaan’s advance booking opened to thunderous response at the ticket window. Industry experts are confident that Shah Rukh Khan starrer ‘Pathan’ will open somewhere between Rs 45 to 50 crore at the box office. The Yash Raj Films project, which marks Shah Rukh’s return to leading men roles after 2018’s “Zero”, is set to hit cinema halls a day before Republic Day, which gives the Hindi film a five-day extended opening weekend.

The site has previously faced a number of harsh measures, however it has been discovered that the crew behind it always resurfaces with a new domain once the original Tamilrockers site is shut. If they are prohibited, they move to a new domain and continue to distribute pirated movie versions. Tamilrockers is renowned for leaking popular theatre releases a few hours before the movies are set to hit the screens.