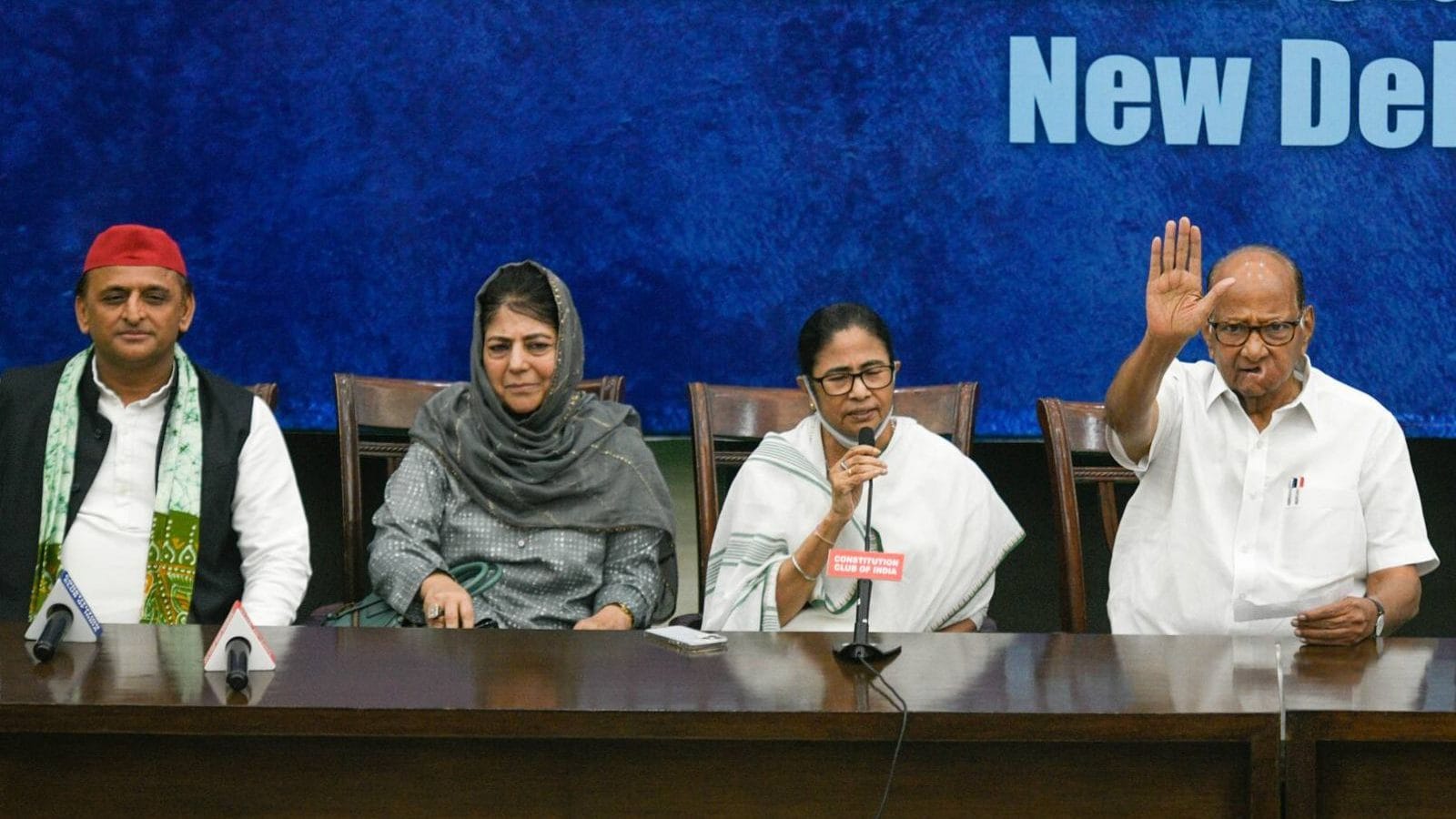 Hectic deliberations, some differences of opinion but a common goal — put up a united front to tackle the BJP behemoth ahead of the 2024 Lok Sabha elections. As the Opposition gathered in Delhi to pick a common face as its representative for the Presidential elections, the cracks were hard to ignore. While parties such as the TRS and AAP stayed away, sceptical of sharing stage with arch-rival Congress, the one name floated by all leaders — Sharad Pawar — did not seem too keen on the top post.

As the race for the top post hots up, News18 brings you a lowdown of the polls:

On June 9, the Election Commission of India announced that the 16th Presidential Election, 2022, will take place on July 18 and the counting of votes will be taken up on July 21 in Delhi. The new President will take oath on July 25. At a press conference in New Delhi, the EC announced that the nomination for the Presidential Polls will be filed on June 29 and its scrutiny will be done on June 30.

President Ram Nath Kovind’s tenure is set to end on July 24 and as per Article 62 of the Constitution, an election for the next president must be held before the completion of the incumbent’s term.

“Election shall be held with the system of proportional representation by means of the single transferable vote and the voting shall be by secret ballot. The elector has to mark preferences against the names of the candidates, only with a particular pen, provided by the designated official,” CEC Rajiv Kumar said at the press meet.

The poll watchdog said that the nominations will be filed from 11 am to 3 pm. Issuing guidelines for the voting process, the EC said that in order to cast the votes, the poll panel will give a pen and no other pen will be accepted. Elections will be held in the Legislative Assemblies and in the Parliament House, where MPs and MLAs can cast their votes anywhere by giving information and taking prior approval of 10 days.

The announcement soon set the cat among the pigeons in the Opposition camp. Led by Bengal Chief Minister Mamata Banerjee — much to the chagrin of the Congress — several opposition leaders gathered in Delhi to build a consensus. Along with the Congress, NCP, SP, RJD, NC, CPM, CPI, JMM, Shiv Sena, IUML, PDP, JDS, and RLD were among those who attended the meeting.

The name that started doing the rounds much before the meeting was of NCP supremo Sharad Pawar. However, Pawar turned down the offer, saying he wanted to stay in active politics. According to several sources in the NCP, the party chief is keen on spearheading forging of an Opposition alliance ahead of the 2024 polls and sees a bigger role for himself as kingmaker. Pawar also enjoys good personal equations with PM Narendra Modi despite his public criticism of the prime minister on political issues.

More than those who attended the meeting, it was the absentees who attracted attention. Naveen Patnaik’s Biju Janata Dal (BJD), Aam Aadmi Party (AAP), the Telangana Rashtra Samithi (TRS) and Shiromani Akali Dal (SAD) are among those who decided to skip the meet, with TRS and SAD refusing the invite due to Congress’s presence.

News18 had reported on Wednesday that TRS chief K Chandrasekhar Rao was firm on not sharing any platform with the Congress, even as he preps the ground for a bigger role in national politics.

TRS MLC Palla Rajeshwar Reddy, while speaking to News18, said the party decided to skip the meeting since Congress was also a part of it. “The CM had already communicated to Didi [Banerjee] that we want a meeting with all regional parties only. Why did they invite the Congress then?” he asked.

Political experts highlight that Chief Minister KCR, who is looking at venturing into national politics, wants to solely focus on creating an alternative force against the BJP and Congress. Any joint space involving the Gandhi family would prove counterproductive as it will provide political fodder to the BJP to propel a narrative that the TRS and Congress have a secret understanding, which could potentially damage the party’s image in the state.

All India Majlis-e-Ittehadul Muslimeen (AIMIM) chief Asaduddin Owaisi said he was not invited to the meeting. Speaking to ANI over the phone, Owaisi said, “I was not invited. Even if I were invited, I would not have participated. The reason is Congress. The TMC party which speaks ill about us, even if they had invited us, we would not have gone just because they invited the Congress.”

Yet another chink in the armour was the game of one-upmanship between the Congress and the TMC in bringing the Opposition on the same page. Mamata Banerjee’s initiative to personally invite 22 leaders for June 15, while invoking that a “strong effective opposition is required to fight against divisive forces”, was an attempt to reach out to the entire opposition spectrum — from Arvind Kejriwal to KCR and also the Left.

However, this did not sit well with the Congress, which claimed it had unofficially started the process of back-channel talks and initiated holding a meeting.

Despite the tension, TMC insiders say the party is positive about going ahead with the Congress but the impediment, once again, is the age-old question: Who gets to play big brother?

According to political experts, the Presidential election will be a litmus test for the Opposition to see if they can really come together for a semi-final before the 2024 Lok Sabha polls where they face the BJP behemoth.

If not Pawar, then who?

At the meeting, Farooq Abdullah’s son and former J&K CM Omar Abdullah, however, asked not to discuss the names for the Presidential polls. Asked about the presidential election race, Gandhi told news agency PTI, “It is too premature to comment on it.”

Putting speculations to rest, Bihar Chief Minister Nitish Kumar too had announced that he is not a candidate for the July 18 polls. The JD(U) had floated the name of the party supremo and Bihar Chief Minister, Nitish Kumar, as a probable candidate for the post of the President of India a couple of times over the last four months before rolling it back.

The ruling National Democratic Alliance has 440 MPs while the opposition UPA has around 180 MPs, besides 36 MPs of the Trinamool Congress. If calculated roughly, the NDA has around 5,35,000 votes out of a total of 10,86,431 votes of all electors. This includes 3,08,000 votes with the support of its MPs and allies. The alliance is hopeful of support from independent regional parties such as the YSRCP, BJD and AIADMK.

Who Can Become President?

Anyone who is an Indian citizen and meets certain additional requirements is eligible to become the President of India. A candidate must be at least 35 years old and should be qualified for election as a member of the Lok Sabha, or Lower House of parliament. The candidate must not hold an office of profit.

NATO summit to conclude with talks on southern nations, terrorism