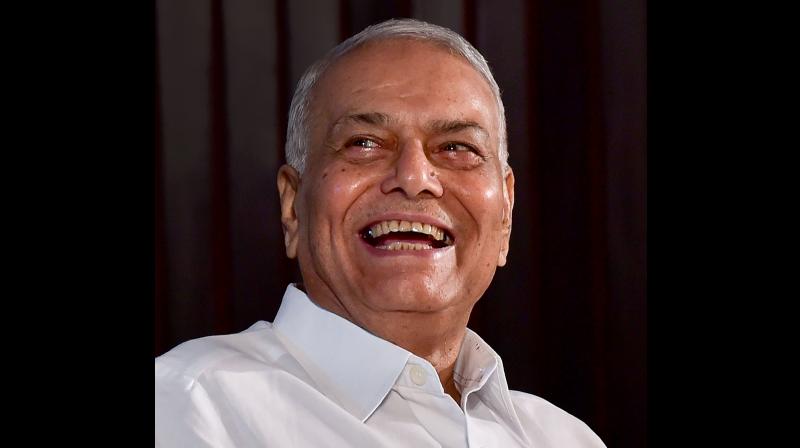 New Delhi/Kolkata: The Opposition parties on Tuesday fielded former Union minister Yashwant Sinha as their joint candidate for the coming presidential elections. The Opposition leaders, who gathered at the Parliament House Annexe for the meeting convened by NCP supremo Sharad Pawar, unanimously agreed on Mr Sinha’s name. “In the forthcoming presidential elections, we have decided to elect a common candidate and stop the Narendra Modi government from doing any further damage. At a subsequent meeting held today we have chosen Yashwant Sinha as the common candidate. We appeal to all political parties to vote for Yashwant Sinha,” said Jairam Ramesh, the AICC communications chief, reading from a joint statement by the Opposition. This was the second meeting of the Opposition parties to decide on a presidential candidate. Mr Sinha has headed the key finance and external affairs ministries in the Atal Behari Vajpayee government from 1999 to 2004.

Earlier on Tuesday, before the joint Opposition meeting, Mr Sinha had resigned as Trinamul Congress vice-president and all other party posts. Announcing his resignation from the TMC, Mr Sinha tweeted: “I am grateful to Mamata ji for the honour and prestige she bestowed on me in the TMC. Now a time has come when for a larger national cause I must step aside from the party to work for greater Opposition unity. I am sure she approves of the step.”

In Kolkata, West Bengal chief minister and TMC supremo Mamata Banerjee congratulated her party colleague for becoming the presidential candidate from the Opposition. Lauding the veteran politician after senior Congress leader Mallikarjun Kharge announced his name, Ms Banerjee tweeted: “I would like to congratulate Shri @YashwantSinha on becoming the consensus candidate, supported by all progressive Opposition parties, for the upcoming presidential election. A man of great honour and acumen, who would surely uphold the values that represent our great nation!”

Trinamul MP Abhishek Banerjee, the CM’s nephew, who attended the Opposition meeting representing his party, also tweeted: “Heartiest congratulations to @YashwantSinha ji for being chosen as the joint Opposition candidate for the coming presidential elections. It is my firm belief that for all progressive parties who share the same vision for our nation, there could not have been a better choice!”

The joint statement by the Opposition parties appealed to the BJP and its allies to support the candidature of Mr Sinha so that the nation can have a “worthy Rashtrapati elected unopposed”. A committee has been formed to steer Mr Yashwant Sinha’s campaign. Congress leader Jairam Ramesh said: “We regret that the Modi government made no serious effort to have a consensus on a presidential candidate.”

The last date for the filing of nominations is June 29. The election, if it is necessary, will be held on July 18 and the counting will be on July 19.