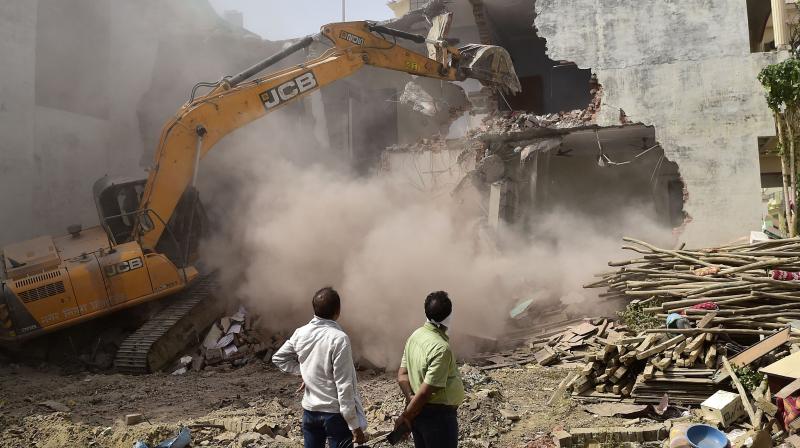 New Delhi/Kolkata: Protests and the imposition of curfews continued in several states over the two erstwhile BJP spokespersons remarks over Prophet Mohammad. In Uttar Pradesh, where some of the major cities faced massive protests, the Yogi government brought out bulldozers on Sunday to raze down the houses of some of the protesters. Among those whose homes were bulldozed on Sunday was of Muslim activist Afreen Fatima in Prayagraj.

Heavy police deployment was seen in Silchar, Ranchi, Howrah, Prayagraj and parts of Jammu and Kashmir after violent protests over derogatory comments on Prophet Mohammed by former BJP spokesperson Nupur Sharma. While Ms Sharma has been suspended from her party, several FIRs have been filed across the country against her. At least two people have been killed, and hundreds arrested after clashes between protesters and the police since Friday. Nine FIRs have been filed over the violence and death during police firing in Ranchi.

In Maharashtra, the Bhiwandi police has summoned Nupur Sharma to record her statement on Monday over her alleged objectionable remarks against Prophet Mohammad, while a fresh FIR was filed against her in West Bengal under non-bailable charges. The FIR is under Sections 153A (promoting enmity between different groups on the grounds of religion), 504 (intentional insult to provoke breach of peace), 505(2) (statements creating or promoting enmity, hatred or ill will between classes) and 506 (criminal intimidation) of the Indian Penal Code. Incidentally, the Jamaat Ulema-e-Hind has suggested that Ms Nupur Sharma should be forgiven as as per Islamic practice.

To tackle the protests in Uttar Pradesh, the Yogi Adityanath government continues with its “bulldozing” techniques after these were reported from Prayagraj, Saharanpur, Moradabad, Hathras and Kanpur since the Friday prayers in mosques. The state government has reportedly slapped the “Gangster Act” against many protesters as Yogi Adityanath called for stern action against the “rioters”.

Samajwadi Party chief Akhilesh Yadav on Sunday strongly opposed the demolition drive in the state, saying it was Nupur Sharma who should face action over her comments but instead “peaceful protesters are being punished”.

The Uttar Pradesh Police has so far arrested over 300 people from eight districts of the state over Friday’s violent protests. On Sunday, the house of one of the accused in the violence in Prayagraj was demolished for being an “illegal construction”.  Sources said that more demolitions can be expected in the days to come in Prayagraj, Saharanpur, Moradabad, Hathras, Kanpur and the other places which witnessed protests.

The Prayagraj Development Authority demolished the house of Mohammad Javed, who has been accused over his involvement in the violence in the district on Friday. Javed is the father of Afreen Fatima, a student at JNU. Javed Mohammad’s family has alleged he was served a backdated notice. The family has filed a plea against the demolition, claiming that the order incorrectly mentions him as the owner of the house instead of his wife. His wife, Somaiya Fatima, alleged that the authorities had not issued any notice prior to the action about their house being illegal.

“Bulldozers are being used for action in Prayagraj by the Prayagraj Development Authority under the ambit of law. Heavy police deployed there as violent incidents happened last Friday,” said Prashant Kumar, ADG (law and order) UP police. He added 306 people have been arrested since Friday while 13 injured policemen are getting treatment.

In UP’s Bhadohi, a case was registered at Gopiganj police station after a procession was taken out on Saturday evening despite prohibitory orders being in place in support of Nupur Sharma. In Saharanpur, 71 people have been arrested. “We have found CCTV footage via which we are identifying them. We are taking action only after we find solid proof so we do not have to let them go,” said SP City Rajesh Kumar on the protests in Saharanpur after the Friday prayers.

Security has been tightened in Jharkhand as Section 144 remained in effect in Ranchi. With the situation slowly easing in Ranchi, the state administration has restored Internet services that had been cut off to contain the protests. “The facilities that were stopped have begun… 25 FIRs have yet been registered regarding the violence, with 22 people identified by name and several others have been booked as unknown. An SIT has been formed to look into it. We are taking confidence-building measures and ensuring patrolling. We are monitoring all social media, including WhatsApp. We are seeing uploads, downloads, hashtags, statements. Any person trying to instigate violence will be booked,” said Ranchi SSP S.K. Jha.

All states where violence has taken place must ensure strict action and investigation so such incidents do not repeat themselves, said Union minister Anurag Thakur on Sunday.

The West Bengal police has arrested over 100 persons for the incidents of violence over the hate speech so far. On Sunday the BJP’s Leader of the Opposition Suvendu Adhikari too had an altercation with the police when he was stopped from visiting the violence-hit areas of Howrah. In Nadia, a local train came under attack by a violent mob at Bethuadahari railway station, which disrupted services for over an hour. Railway officials said the train was damaged and some passengers injured.

In Jammu and Kashmir, a Muslim cleric who called for Nupur Sharma’s beheading was arrested, while the Aurangabad’s AIMIM MP Imtiaz Jaleel has set off a fresh controversy by demanding the hanging of Ms Sharma for her remarks about the Prophet.

In Kuwait, meanwhile, the expats who have protested against Ms Nupur Sharma will be arrested and deported from Kuwait. The Kuwait government has issued instructions to arrest such protesters and send them back to their respective countries saying that “all migrants should respect the laws and should not take part in any kind of demonstrations”.

In Kuwait, expatriates are not allowed to organize sit-ins or protests in the country. Arab Times reported that the protesters have violated the laws and rules of the country.