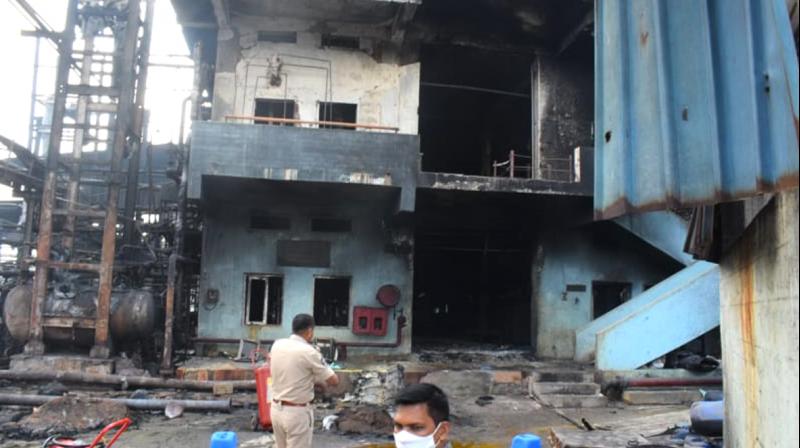 Vijayawada: The three-member National Green Tribunal-appointed panel of experts has found that an exothermic reaction in the reactor caused the temperature to rise beyond 200 degrees C and caused the blast, killing nine at Porus Lab in Akkireddygudem village of Musunuru mandal in Eluru district, Andhra Pradesh.

The panel headed by Chennai-based central pollution control board scientist Poornima carried out a thorough inspection during its recent visit to the pharma lab.

Sources privy to the development said the panel members felt the pharma lab was ill-equipped to handle such a situation as the temperature went beyond permissible limits. Also, the chemical engineer at the site failed to handle the situation well.

So was the chemist, who did not monitor the situation for a while. By the time he reached the place and noticed problems with the reactor, it blasted, throwing the mix of chemicals in the reactor all around.

The sources said the panel observed no interlocking facility had been installed. Else, it could have helped in an auto shut-off of the reactor the moment its temperature shot up beyond permissible limits. This could have avoided the major mishap.

It is also not known whether the lab employed any safety officer. This is mandatory for factories handling hazardous chemicals.

The norms say a safety officer must be employed by a firm employing 500 employees or more, and the safety officer should also be present and monitoring the situation at the lab in case it is working round-the-clock, handling hazardous chemicals.

The panel also noticed the fire equipment working well and which helped control the raging fire immediately with support from fire service personnel.

The NGT principal bench, Delhi, has taken up the case suo moto after it got information about the fire mishap at Porus Lab from the media and initiated an inquiry.

Meanwhile, an NGO filed a petition in the NGT bench in Chennai seeking a probe into the fire mishap. However, the Union ministry of environment and forests intervened and requested the NGT principal bench in Delhi to merge both the inquiry – one taken up based on suo moto basis and the other on a petition.

Accordingly, it has constituted a three-member panel and directed it to submit its inquiry report by August 17 and posted the hearing for the same day.

Meanwhile, the Eluru district administration has also held an inquiry into the mishap and came up with a comprehensive report clubbing both the reports of AP government and the NGT, to be submitted to the NGT principal bench in Delhi.