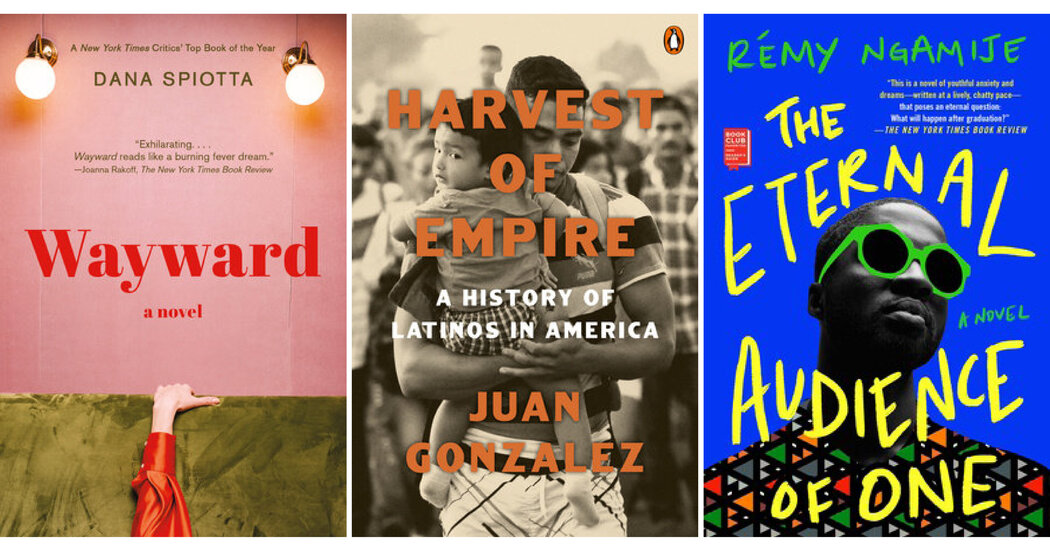 WAYWARD, by Dana Spiotta. (Vintage, 336 pp., $17.) Spiotta’s fifth novel, about female aging in contemporary America, follows a woman who reckons with the trappings of wealth and comfort after spontaneously buying a home in Syracuse and divorcing her husband. Our reviewer, Joanna Rakoff, called the book a “virtuosic, singular and very funny portrait of a woman seeking sanity and purpose in a world gone mad.”

HARVEST OF EMPIRE: A History of Latinos in America, by Juan Gonzalez. (Penguin, 560 pp., $20.) Originally published in 2000, this updated edition of Gonzalez’s ambitious and heavily researched account provides historical context to Latin American immigration and culture in the United States. The Times called it a “serious, significant contribution” to understanding Latino life in this country.

THE ETERNAL AUDIENCE OF ONE, by Rémy Ngamije. (Scout Press/Gallery, 400 pp., $17.99.) This debut novel follows Séraphin, the witty teenage son of Rwandan exiles in Namibia, as he navigates puberty and, much later, the sexual and racial politics of a new generation in South Africa while attending law school. As our reviewer, Anderson Tepper, noted, Ngamije’s book is one “of youthful anxiety and dreams — written at a lively, chatty pace.”

SHAPE: The Hidden Geometry of Information, Biology, Strategy, Democracy, and Everything Else, by Jordan Ellenberg. (Penguin, 480 pp., $18.) As our reviewer, Matt Parker, put it, Ellenberg employs a “deliberately wide” definition to make a compelling case that geometry is built into the way we think about space and motion, touching on everything from mosquitoes to Sanskrit poetry.

THE DICTIONARY OF LOST WORDS, by Pip Williams. (Ballantine, 416 pp., $17.) In the words of our reviewer, Alida Becker, this novel is a “captivating and slyly subversive fictional paean” to the real women who worked thanklessly on the first Oxford English Dictionary. It follows a young girl who grows up to participate in the project, add her own contributions and challenge her superiors.

THE THOUSAND CRIMES OF MING TSU, by Tom Lin. (Back Bay, 288 pp., $16.99.) A hardened Chinese American assassin roams the West in search of the men who nearly beat him to death, took his wife and conscripted him to work on the railroads. “Death in this ‘ancient and deathless’ terrain is always too close, where the land is sometimes a resplendent spectacle, more often a callous god,” our reviewer, Chanelle Benz, wrote of this novel.