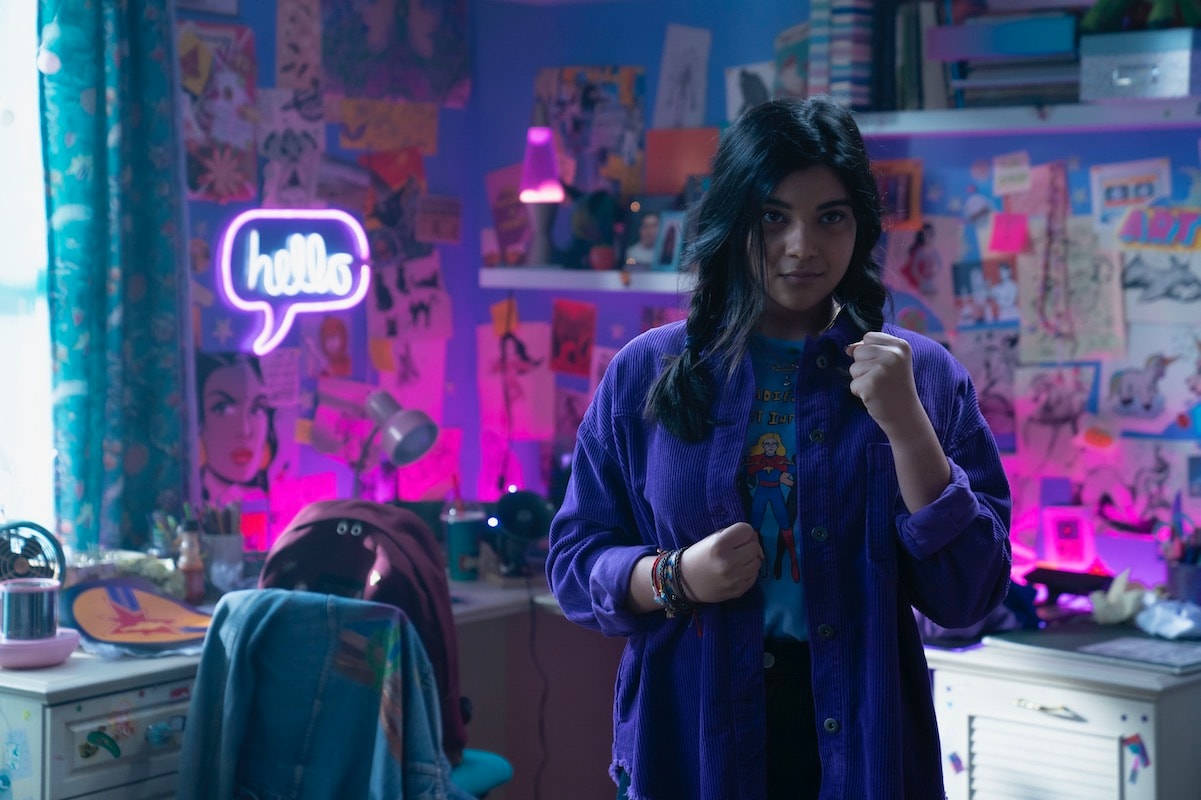 Ms. Marvel — premiering Wednesday on Disney+ and Disney+ Hotstar — is the most refreshing and self-assured Marvel Cinematic Universe series since WandaVision. That might seem like low praise, given everything in between has been hit or miss. Actually, largely miss, save for the time-hopping with the god of mischief in Loki. Those who’ve been reading my reviews and episodic recaps will already know I gave the 👎🏼 to New York Christmas comedy Hawkeye, the Egyptian adventure with mostly white men in Moon Knight, and The Falcon and the Winter Soldier that pulled its punches. In that case, allow me to revise my opening statement. Ms. Marvel is a thorough delight, one that’s relatable, enjoyable, unique, and really funny in equal parts — a breath of fresh air that MCU-on-TV needed.

This is true for at least the first two episodes of Ms. Marvel that critics, including I, had access to. (There are six episodes in total, as on other MCU shows, so I’ve seen a third of the series’ run.) Some of Ms. Marvel‘s success is down to the fact that it’s inspired by her Marvel comics — Ms. Marvel’s Pakistani-American co-creator Sana Amanat is a co-executive producer here — in more ways than one. Its titular protagonist loves to fantasise and doodle, and as such, her chats and conversations are turned into larger-than-life animation on walls, are imprinted on roads, or take over neon lights and building signage. To me, it felt reminiscent of both Scott Pilgrim vs. the World, and Spider-Man: Into the Spider-Verse. In their vein, Ms. Marvel‘s comic book-inspired stylisations are spot on.

And it’s similarly spot on elsewhere too. Having the task of introducing the MCU’s first Muslim superhero — the Pakistani-American teenager Kamala Khan — Ms. Marvel does really well in weaving Urdu, South Asian mannerisms, and other localisations into its episodes. It feels like a believable world. But not always. Ms. Marvel wears its love for Bollywood music and movies on its sleeve, but the sheer datedness of a deep-cut Shah Rukh Khan reference reflects the writers’ age more than its cast. While Ms. Marvel‘s Pakistani-British creator and head writer Bisha K. Ali (Loki episode 3) is a millennial, the teenagers in her show are born in the late 2000s. It does better with its needle drops, most of which are South Asian music, as they add to the flavour and humour of the scene for those aware about its cultural place.

All You Need to Know About Ms. Marvel, the New Marvel Series

Set in Jersey City, New Jersey a year or two after Avengers: Endgame, Ms. Marvel is centred on the aforementioned 16-year-old Kamala Khan (Iman Vellani) who loves Captain Marvel and creating Avengers fan fiction. Naturally then, she wants to attend the inaugural AvengerCon — think ComicCon, but the Avengers — and take part in the cosplay competition as Captain Marvel. Her problems are tiny, very teenage problems. This makes Ms. Marvel very similar to Spider-Man and Peter Parker’s own teenage troubles, except in a very different environment and with a very different protagonist. And also unlike the latest Spider-Man, Ms. Marvel is very much an origin story, something the MCU decided to skip given the numerous Spider-Man adaptations.

Though this might be Kamala’s first live-action appearance, Ms. Marvel’s journey from page to screen isn’t just a straight depiction. The biggest change is to her powers. While Kamala retains stretchy hands from the comics, her powers are more focused around light. She can shoot out photon rays out of her hands, and create platforms out of light that hover mid-air. “Cosmic!” as Kamala squeals in the first episode. In fact, her early antics earn her the nickname Night Light. Moreover, the origin of Kamala’s powers doesn’t have anything to do with “dormant Inhuman abilities” as in the comics — Marvel Studios president Kevin Feige noted that didn’t match with the MCU’s events and timeline — but rather a bangle artefact she gets in the mail from her Nani (maternal grandmother).

Ms. Marvel is all about tying it into Kamala’s Pakistani heritage, which is similar to what Black Panther and Shang-Chi and the Legend of the Ten Rings did for their respective characters. For Kamala, that involves her maternal great-grandmother who brought “shame” upon the family — a powerful force in Asian communities — and why her parents don’t want to really talk about her. (Kamala tries to get answers from outside, and it’s just gossip and a bunch of outsized rumours. Typical again.) Kamala’s immigrant Pakistani parents, Yusuf (Mohan Kapur) and Muneeba (Zenobia Shroff), are also stricter with her than they are with her elder brother Aamir (Saagar Shaikh) — he’s afforded a lot more freedom, and his Muslim fiancée isn’t Pakistani — which is also a South Asian thing.

For the first two episodes, Ms. Marvel is largely about Kamala trying to win some freedom from her parents, putting her powers to good use, and learning more about the family past. There’s a bit of Shazam! to it at one point, as Kamala and her best friend Bruno Carrelli (Matt Lintz) — he’s really into gadgets, and what Ned is to Peter in MCU’s Spider-Man — figure out her newfound powers. Kamala also pushes her rich friend Nakia Bahadir (Yasmeen Fletcher) to run for the mosque board election. Ms. Marvel throws in a romantic first-love angle too, with junior-year Kamala falling for a new senior in Kamran (Rish Shah) who is introduced in the most white-boy manner ever. And her superpowers give her a newfound confidence at school, as she starts being more self-assured of herself.

That goes for the actors and makers too, expanding on what I said at the start. Ms. Marvel is a self-assured debut for both Vellani and Ali. The latter has little experience on this scale, outside of her staff writer position on the Tom Hiddleston-led Loki. But Ali knows the tone, the style, and the approach she’s going for with her series. And she delivers in spades. And though Ms. Marvel does admittedly slip into that generic Marvel groove that all MCU properties are ultimately guilty of — and I’m including Black Panther here — it stands on its own, and charts its own hilarious and glorious path for the most part.

The former, Vellani, might be a newcomer — she’s directed a few short films on her own, but Ms. Marvel is her first feature project — but the 19-year-old Pakistani-Canadian nails every note that is asked of her, be it comedic or dramatic. Much of the Marvel show’s energy is down to her performance of Kamala and how she behaves. Vellani, and in turn Ms. Marvel, is helped by a roster of characters that grab your attention. That includes Jordan Firstman in a minor role as the easy-going school principal Mr. Wilson. (Sorry, please call him Gabe, Mr. Wilson is his dad.) Kamala’s mother Muneeba is also easy to fall in love with, despite her tough exterior. Shroff is an instant hit, delivering the requisite sighs and reactions that any Pakistani/ South Asian mother would in note-perfect fashion.

Deep into the first episode, Kamala says to Bruno: “It’s not brown girls from Jersey City who save the day.” But as Ms. Marvel is here to show, they very much can — and do. The latest MCU project expands on Marvel Studios’ inclusion efforts, which have been turbocharged in recent years. (Meanwhile, Sony Pictures has given us its third white live-action Spider-Man in a row.)

What’s more interesting to me with Ms. Marvel though is that Kamala and Co. haven’t known a world without superheroes. With Ms. Marvel, we are being given a peek into the generation that has grown up in the Age of Heroes — Kamala lives and breathe superheroes, just like a lot of teenagers in our universe — and are now looking for their place in the world as they come of age. The depth of Ms. Marvel‘s immersion into Marvel and superhero culture speaks volumes of how the MCU isn’t just a force in our world. It’s a force in its own make-believe world too. Essentially, the MCU has been around for so long now that, in a way, its heroes are now spawning more heroes.

For me, the closest analogy to this is men’s tennis. The greats of the game have been around for so long that, at times, they go up against teenagers who have trained under them or took up the sport after watching them play. (It happened just this weekend at the 2022 French Open, where serial-winner Rafael Nadal beat his former student Casper Rudd.) And it’s going to be something similar for Kamala Khan, as she is expected to fight alongside her idol Carol Danvers (Brie Larson) on The Marvels, the sequel to Captain Marvel out in July 2023. It’s a Marvel-ous world, and Ms. Marvel shows Kamala is ready to make it her own.

Ms. Marvel premieres Wednesday, June 8 on Disney+ and Disney+ Hotstar. A new episode will air every Wednesday around 12:30pm IST/ 12am PT until July 13.