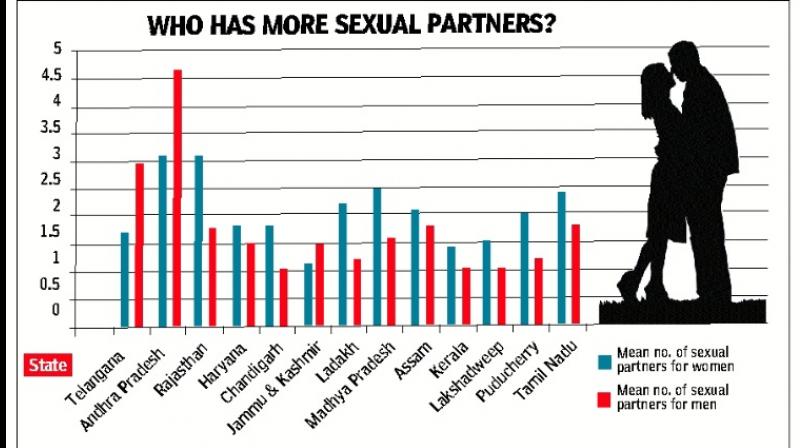 HYDERABAD: Women were found to have more lifetime sexual partners than men in 11 states and union territories, but the two Telugu states have defied the national trend.

The average lifetime sexual partner count for women in Telangana is 1.7, while the figure is 3.0 for men, according to the survey. In Andhra Pradesh, women and men had 1.4 and 4.7 partners, respectively. After Meghalaya (9.6) and Sikkim, the figure of 4.7 for men in AP is joint third highest in the nation (7.1).

In 11 states and UTs, women typically have more sex partners than men, but the NFHS data shows that males were significantly more likely to have intercourse with someone who wasn’t their husband or living companion, with a rate of 4 per cent compared to women’s 0.5 per cent.

These 11 states and UTs — Rajasthan, Haryana, Chandigarh, Jammu and Kashmir, Ladakh, Madhya Pradesh, Assam, Kerala, Lakshadweep, Puducherry, and Tamil Nadu — are the ones where women were found to have more sexual partners than men. In Telangana, 0.4 per cent of the women polled reported having two or more partners in the previous year, compared to 2.1 per cent of the men.