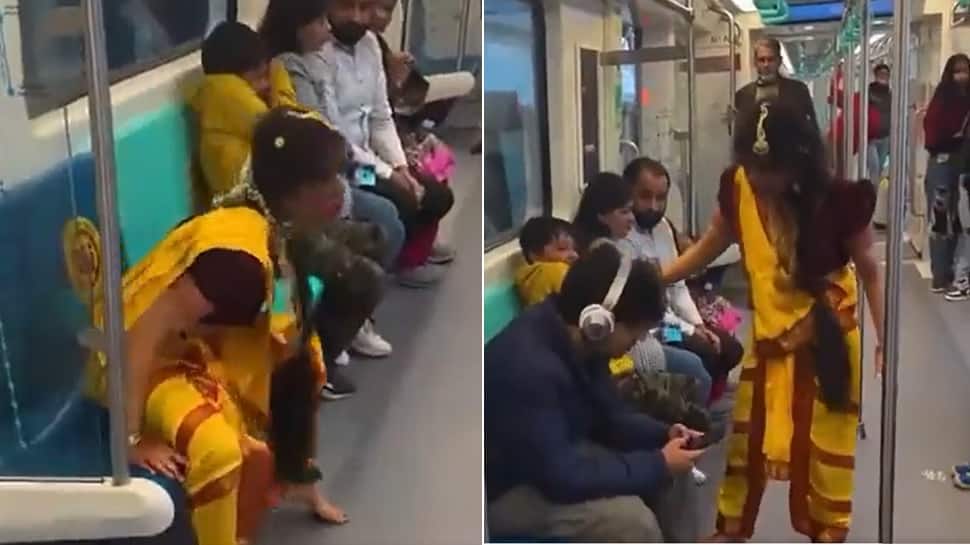 In a bizarre incident, a girl dressed as a movie character boarded a metro train, reportedly on Noida’s Aqua Line connecting Noida to Greater Noida. The video is being widely shared on social media platforms, most notable on Twitter. As seen in the video, a girl is dressed as ‘Manjulika’ an iconic character played by Vidya Balan in movie Bhool Bhulaiyaa starring Akshay Kumar in the lead role. The girl is seen enacting the character in one of the metro coaches, trying to scare the passengers. In one instance, the girl comes close to a boy sitting in the corner seat with his headphones on, and pushes him away from the seat, only to sit at the same spot herself.

It’s not clear yet, why the girl was dressed in such a way? Many Twitter users suggested that she was making an Instargram Reel on the Metro, and hence was enacting the popular character. The video has since received mixed reactions from Netizens, most of whom are not amused with the girl’s act.

This is not the only incidence where someone has taken a metro ride dressed in a unique manner. Both Delhi and Noida Metro see instances of fights on a regular manner. There have been reports of proposals, dance performances and skits, on the metro trains as well.

In December 2022, a man took a ride on Delhi Metro wearing a yellow towel with a vest. The viral clip showed several commuters, mostly young women, bursting out in laughter as the man walked up and down the coach.