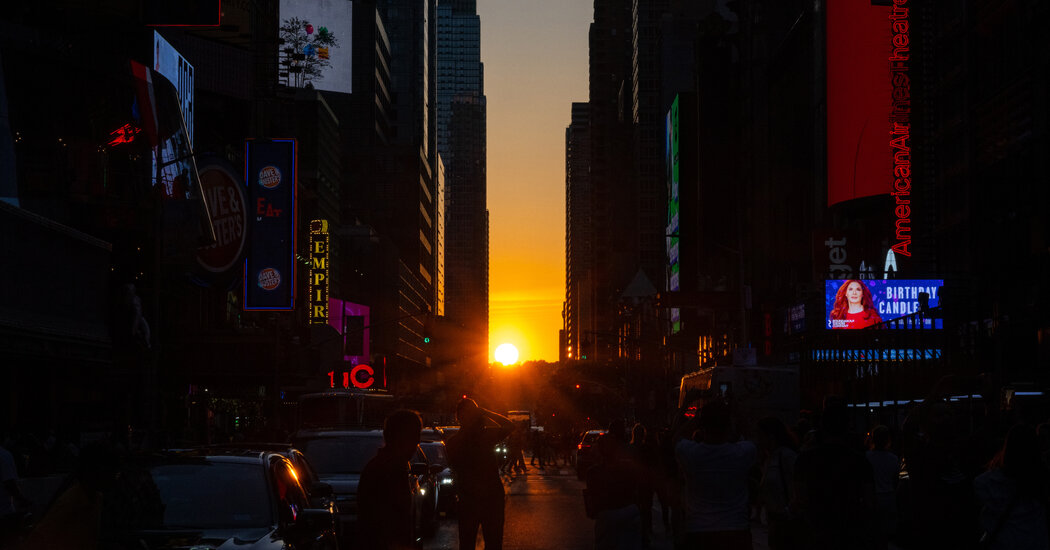 It’s time for New Yorkers to get very excited about the setting sun.

That’s because Manhattanhenge is upon us. It can produce, when the weather cooperates, four of the most striking sunsets of the year in New York City.

The name is a New Yorker-style nod to Stonehenge, the ancient rock structure in the English countryside that aligns with the sunsets and sunrises during the summer and winter solstices. That pre-modern monument was purposely built for religious and spiritual reasons. In contrast, the grid of New York City was not designed with sunsets in mind, but it has ended up functioning in a similar manner. Across four days every May and July, it can bring people together to admire our particular geographic location in the cosmos as the sun settles into the horizon, disappearing perfectly along the city’s broad west-east corridors.

An event like Manhattanhenge can halt the entire borough, beckoning people to celebrate an otherwise normal daily sunset.

As if New York couldn’t become any more magical, the sunsets of Manhattanhenge illuminate the streets with a glow of deep tangerine and bubble gum pink, transforming the bustling streets into a place to pause and say, “wow.”

“It’s so famous because it’s a gorgeous sunset,” said Jackie Faherty, senior scientist and astrophysicist at the American Museum of Natural History. “The sun kisses the grid of one of the greatest cities, if not the greatest city in the world, and touches the whole corridor of the concrete jungle with these amazing golden hues. It’s a beautiful thing.”

Sunday presented viewers with clear skies at sundown. Weather forecasters improved the outlook at sundown on Monday to mostly clear, so there will be a chance to take in the full sun version of the event.

Then in July, you’ll get two more chances to see a grid-perfect sunset:

What’s the difference between a half sun and a full sun?

According to Dr. Faherty, it’s a small but meaningful distinction — the half sun will look like the sun is sliced in half and just grazing the horizon, while the full sun, where the complete orb touches the pavement, is the real star of the show.

Is the view better in May or July?

Both viewing dates are equally good. But the weather in May tends to be a bit more temperamental, leaving July as the more solid bet for good viewing.

And as Dr. Faherty points out, “In July, it comes at late evening and the middle of summer when everyone in the city is out in the streets.” For that reason, more people are likely to see Manhattanhenge, even if by accident.

Why does Manhattanhenge happen?

We’re able to witness this celestial event because of a combination of the approaching summer solstice, the grid design of the city and the natural shape the island of Manhattan took on during the last ice age.

Some 18,000 years ago, the massive ice sheet atop North America began to melt, carving out Manhattan island and the modern landscape on which the city was built.

This orientation in combination with the street design allow for the western setting sun to put on this show, she said.

“The grid system was designed for Manhattan before there was even an official New York City,” Dr. Krinsky added. The Commissioners’ Plan of 1811 put 90-degree blocks into motion for the official design of the city. Perhaps unsurprisingly, this was mainly for the real estate market: Most home buyers don’t want to purchase lots cut into weird angles.

So above 14th Street and below 155th Street, the city is sliced into a grid. When the Earth tilts toward and then away from the sun during the summer solstice, our beloved Manhattanhenge is the result. It also shows how the structures built by people interact with the natural world.

“Things like this are deeply connected not just to the actual architecture of the universe around us, but to our interaction with it,” said Caleb Scharf, an astronomer at Columbia University. “The city is an extension of us.”

Dr. Scharf adds that just like Stonehenge, Manhattanhenge helps us find patterns in our surroundings and make sense of them.

“At some point, someone is going to have the question of, ‘Why is that happening?’” he said. “‘Wait a minute, oh, the sun doesn’t stay at the same place on the horizon all the time. Why is that?’ This can so often lead to those ‘Aha!’ moments where we suddenly have this urge to actually explain what we’re seeing, as opposed to just saying, ‘Oh, that’s nice.’”

Where are the best places to watch?

Luckily, anywhere within the grid system above 14th Street can give you some sort of a view.

You also need to have a clear view of New Jersey, and, Dr. Faherty adds, “You really have to be in the middle of the street for the full effect, which is a tad dangerous.”

Ideally, pick a street with wide avenues and a median that you can stand on and watch from safely. If there’s a big hill, your view will be blocked.

Though nearly everyone goes to 42nd Street, Dr. Faherty recommends 72nd Street, instead. But if you want to join the crowds further downtown, Pershing Square is prime viewing, as is the area above Grand Central Station in the taxi line. While the New York Police Department tries to shut down viewing there every year, photographers crowd the location and it can be quite chaotic.

Manhattanhenge is also visible outside of Manhattan. In Brooklyn or Queens, Dr. Faherty says there are a variety of locations where you can see straight across the city to New Jersey. For the best experience off the island, she recommends Gantry State Park in Queens.

Are there Covid concerns in Manhattanhenge crowds?

The Centers for Disease Control and Prevention says that the risk of transmission is less likely outdoors. But in a large gathering where it is difficult to avoid proximity to people outside your home, and during a time when cases are high in the community, wearing a mask for the duration of a sunset may be a safe bet.