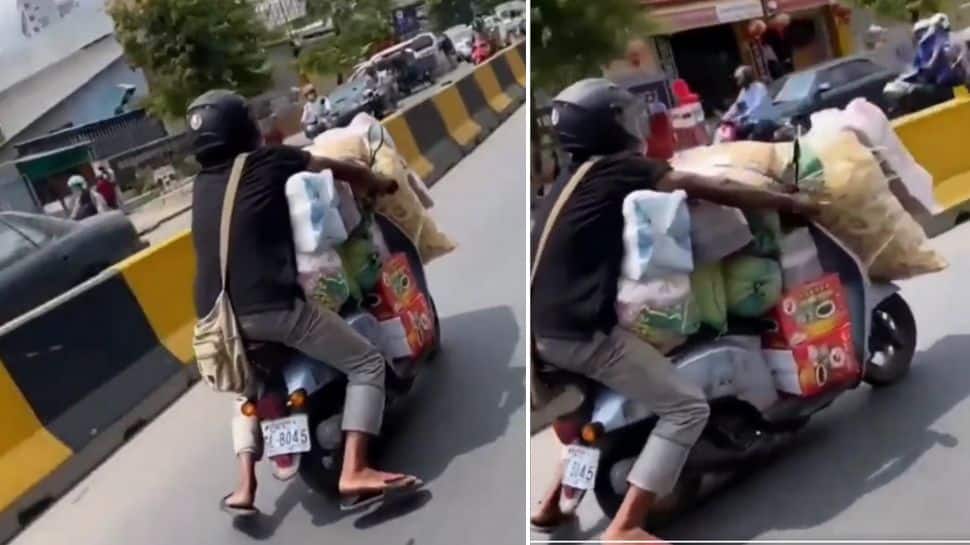 Indian roads are full of vehicles, and a majority of those vehicles on the buzzing roads are two-wheelers. With the streets full of such vehicles, it is often a common sight to see Indians using those vehicles beyond their capacity, for instance, riding with three or four people at once or loading it with a lot of stuff to ferry it around. However, beating all such Indians, a clip of a man carrying a ton of stuff on his two-wheeler is going viral on the internet.

In the video, a man can be seen riding a scooter loaded with stuff probably beyond its capacity. The scooter is so loaded that it seems like there is no space for the rider to sit. He seems like he is barely hanging on the end of the scooter with his feet touching the ground while he rides. To make it even more extreme, the front end of the scooter is loaded with two full sacks. Even if the rider has his scooter beyond overloaded, he is still wearing a helmet while riding the scooter.

There is a possibility to retrieve the data from the Mobile, even if it’s damaged.

The video was uploaded on Twitter by a user going by the name Sagar, he captioned the video by saying, ‘My 32GB phone carrying 31.9 GB of data.” The video has gotten a lot of attention on social media and has garnered more than 7 lakh views. In addition, it is also receiving a lot of attention from the netizens.

Among the other netizens, the video also caught the attention of Telangana Police, who retweeted the video saying, “There is a possibility to retrieve the data from the mobile, even if it’s damaged. But, not life. So, our appeal to people is to avoid putting their lives at risk and others too.” In addition, one of the netizens reacted to the video by saying, “Me trying to cover the whole syllabus in one night..!!”