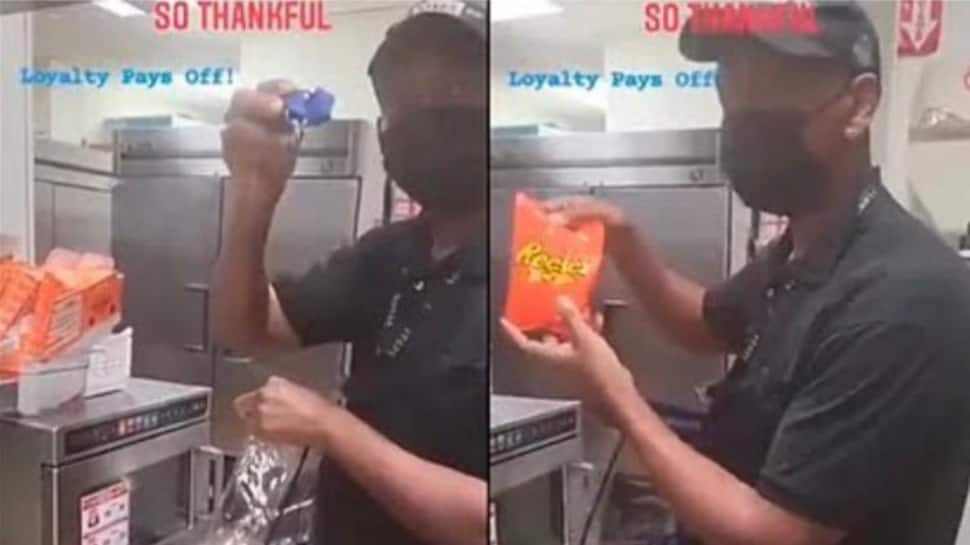 New Delhi: Fast food restaurants are renowned for serving high-quality meals and upholding high standards at all times. Even though not all of these employees are paid as much as they deserve for their efforts, if you go behind the scenes at these fast-food restaurants, you will find some dedicated workers who toil day and night to consistently serve us wonderful food. A Burger King employee just found himself among Twitter’s most popular trends. It was certainly a reason to celebrate the professional milestone that he had finished 27 years of service at Burger King! However, the video he posted online received mixed response from Twitter users. Here is the link to the popular video:

Burger King employee trends after video shows that he was gifted a goodie bag for his 27 years of work dedicated to the company pic.twitter.com/MLJiW21yKE
— My Mixtapez (@mymixtapez) June 21, 2022

Reddit and Twitter were only two of the social media sites where the Burger King employee’s video went viral. It received more than 240k views on Twitter after being shared by @mymixtapez. The worker, whose identity was unknown, appeared to be thrilled about reaching a professional milestone and finishing 27 years at Burger King. Read More: Massive layoffs at Netflix again! Streaming company fires 300 employees in second round

“My reward is that my job got me for 27 years, never missed a day of work,” he wrote. “So thankful,” and “loyalty pays off,” he added. He displayed a goodie bag he had received, which contained a movie ticket, a Starbucks sipper, some chocolates, and some mints. Read More: LIC Jeevan Labh Policy: Invest Rs 253 everyday to get Rs 55 lakh, here’s how

Twitter users shared mixed opinions on the worker who finished 27 years of service at Burger King. Some users thought it was fantastic that he expressed such gratitude and appreciation for the tiny gesture made by his firm. Others believed that he deserved far more for his commitment to the position and allegiance to it.

Oh hell no @BurgerKing. This is so disrespectful. Why hasn’t he been put on a management track? 27 years? https://t.co/SbyolhElOq
— Omar Kelly (@OmarKelly) June 21, 2022

Hey @BurgerKing you lost your crown on this one. https://t.co/srreYoErCK

Burger King has appeared in the headlines on other occasions as well. The fast food restaurant brand is renowned for its brilliant advertising efforts, and this one was no exception. Their “jugaad” commercial featuring actor Hrithik Roshan recently received praise for its innovation.