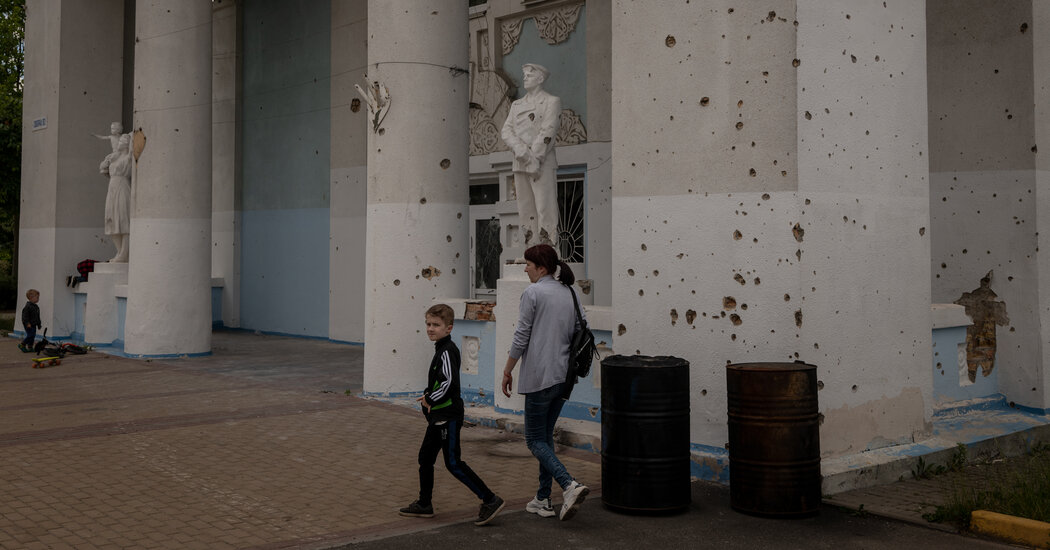 BRUSSELS — NATO member countries will continue to provide Ukraine with heavy weapons and long-range systems, and a new package of assistance to Kyiv will be agreed on by allies in consultation with Ukraine’s defense minister, NATO’s secretary general said on Wednesday.

“Ukraine is in a really very critical situation, so there is an urgent need for support,” the secretary general, Jens Stoltenberg, said before a meeting of the alliance’s defense ministers in Brussels.

A two-day NATO gathering is underway as the battle for eastern Ukraine enters a critical stage, with Russia grinding out steady gains and controlling most of the resource-rich Donbas region. Ukraine has begged for more heavy arms to counter Moscow’s superiority in long-range artillery.

Later on Wednesday, the American defense secretary, Lloyd J. Austin III, will host a separate meeting of a group of countries that are aiding Ukraine militarily. Although outside NATO auspices, the group includes nearly 50 countries and will review with Ukrainian officials Kyiv’s real-time needs.

“Folks will trade notes on their observations, what they’re hearing and seeing,” said the U.S. ambassador to NATO, Julianne Smith. “They will be reviewing what additional security assistance they can provide in the immediate, medium and long term to help Ukraine win this war. And the U.S. will make clear that we continue to stand united with Ukraine for as long as it takes.”

On Wednesday evening, there will be a working dinner on Ukraine with the participation of Ukrainian officials and those of partners, like the European Union, Sweden, Finland, Georgia and Moldova.

The meeting will display unity, but as the war has ground on, some Western allies are quietly pressing for a cease-fire as their economies have grappled with rising inflation and gas prices. On Wednesday, President Emmanuel Macron of France told a news conference that the conflict would eventually have to end with talks. “At some point, when we will have done our maximum to help Ukraine resist — when, I hope, it will have won and the firing has ceased — we will have to negotiate,” he said.

His remarks came as a top Pentagon official repeated the standard American position on Tuesday that the United States would not pressure Ukraine into negotiating a cease-fire, and that such decisions are up to the democratically elected government of Ukraine. Mr. Stoltenberg said the same.

The fight in eastern Ukraine has become a grinding artillery battle marked by sieges of major cities, the sort of conflict that favors Russia’s much larger military. Without aid from NATO member countries, Ukraine would be in a far worse situation than it is now.

Ukraine has demanded more and more sophisticated weapons and has expressed frustration that the delivery of heavy weapons already promised by its Western allies has been slow.

“NATO leaders have realized the urgency,” Mr. Stoltenberg said, and “have stepped up significantly over the last month since the invasion.” But allies also want to ensure that sophisticated new equipment can be used advantageously, and that involves training in both operation and maintenance.

“Allies are committed to continue providing the military equipment that Ukraine needs to prevail, including heavy weapons and long-range systems,” he said.

The war in Ukraine has presented a huge challenge to NATO and to the security structure that helped keep the peace on the continent since World War II. The conflict initially laid bare the divisions within the European Union and NATO. But anger over President Vladimir V. Putin’s invasion has been a unifying force, though some fissures remain over issues such as NATO’s expansion.

Ministers at the meeting will also discuss the desire of Sweden and Finland to join the alliance. Their invitations to do so have been blocked by Turkey, which has made demands of both countries on issues like Kurdish separatism, terrorism, extradition of certain individuals to Turkish courts and restrictions on arms sales.