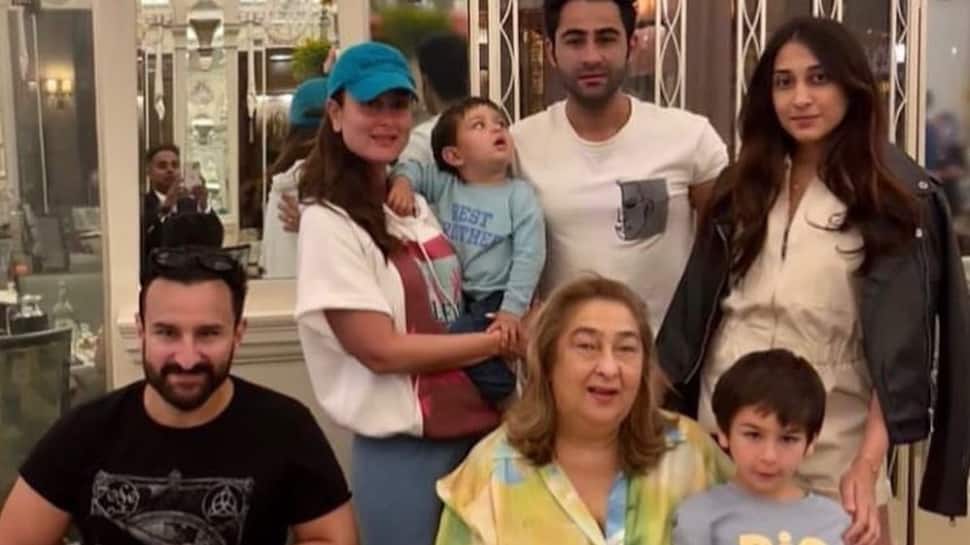 New Delhi: Kareena Kapoor Khan is having a fun time with her husband Saif Ali Khan and children Taimur and Jeh in the United Kingdom. The four have been accompanied by Kareena`s aunt Rima Jain, cousin Armaan Jain, sister-in-law Anissa Malhotra and cousin Nitasha Nanda. Several pictures from their fam-jam dinner in the UK have been doing the rounds on the internet. Anissa originally posted a picture from the dinner on Instagram, which she shared with a red heart emoji and an England flag emoji.

The image features Kareena holding son Jeh in her arms. Saif is seen sitting on a chair in a black T-shirt, next to Rima, who`s holding onto Taimur. Armaan and Anissa are seen standing together. For the family dinner, Kareena opted for a casual t-shirt and pants. She elevated her cool look with a cap. Saif, too, sported a casual look. He wore a black t-shirt.


A few days ago, Kareena dropped a picture of herself enjoying coffee in London. “Waited two years for you baby …Pret .. #Sipping my coffee Coffee Lover,” she captioned the post.

Meanwhile, on the work front, Kareena recently wrapped her OTT debut, which is a murder mystery and will stream on Netflix. It is a screen adaptation of one of Keigo Higashino’s most acclaimed works, `The Devotion of Suspect X`. It is based on a story of a single mother who thought she had finally escaped the clutches of her abusive ex-husband but things do not really go her way. The project also stars Vijay Varma and Jaideep Ahlawat in prominent roles. Kareena also has `Laal Singh Chaddha` in her kitty. It is scheduled to release on August 11, 2022.