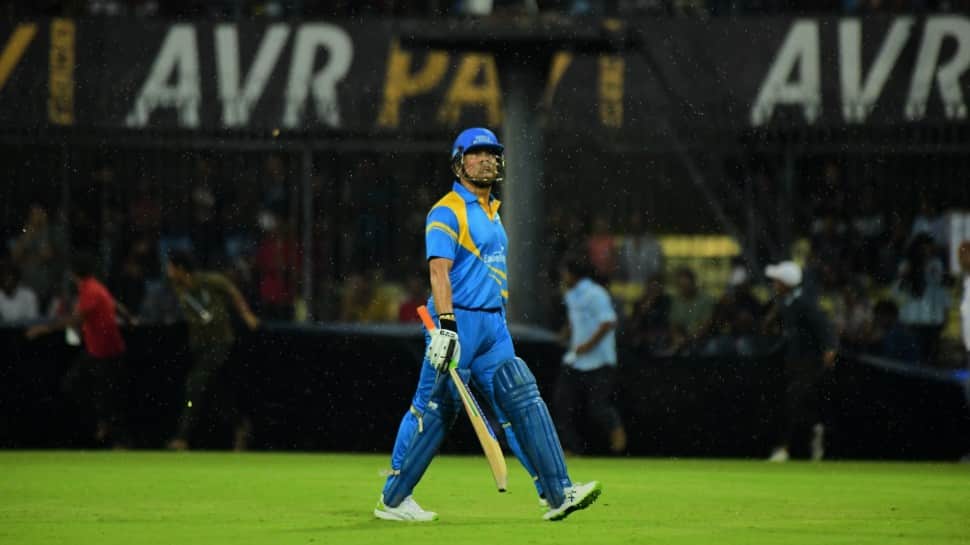 India Legends side hammered Ian Bell’s England Legends by 40 runs in rain-hit Match No. 14 of the Road Safety World Series 2022 in Dehradun on Thursday (September 22). India Legends skipper Sachin Tendulkar was adjudged the Player of the Match for smashing 40 off just 22 balls with three sixes and three fours.

Former India southpaw Yuvraj Singh clobbered 31 off only 15 balls with three sixes while Yusuf Pathan hammered 27 off 11 balls as the India Legends piled up a massive 170/5 in 15 overs. In reply, England Legends were never in the hunt as Rajesh Pawar scalped 3/12 to restrict the Englishmen to 130/6 in 15 overs.

England Legends opted to bowl first after winning the toss and the India Legends openers Naman Ojha and Sachin Tendulkar got off the blocks rapidly. The duo got to the 50-run mark in no time and Tendulkar in particular was quite aggressive from the start. The Indian cricket legend was dismissed after a 20-ball 40 which comprised of three fours and three sixes while Yusuf Pathan and Suresh Raina carried on from where the openers left.

Pathan smacked three sixes in his quickfire innings of 27 off 11 balls while Raina was dismissed for 12. Yuvraj Singh joined the party alongside Stuart Binny and the left-hander turned back the clock with three sixes in his unbeaten 15-ball 31. Binny (18) and Irfan Pathan (11 not out) played cameos down the order to take India Legends to 170 for 5 after the game was reduced to 15 overs per side due to rain.

In reply, the England Legends started well with the openers Phil Mustard and Dimitri Mascarenhas finding the gaps in the powerplay. Mustard played well for his 19-ball 29 and it turned out to be the highest score in the innings as wickets kept tumbling.

India Legends are now 2nd on the points table behind Sri Lanka Legends, level on 12 points with West Indies Legends after 4 matches.

These 13 cities to get 5G internet first; Check is your CITY in the list?

UPI transactions up over 3% at Rs 678 crore in September