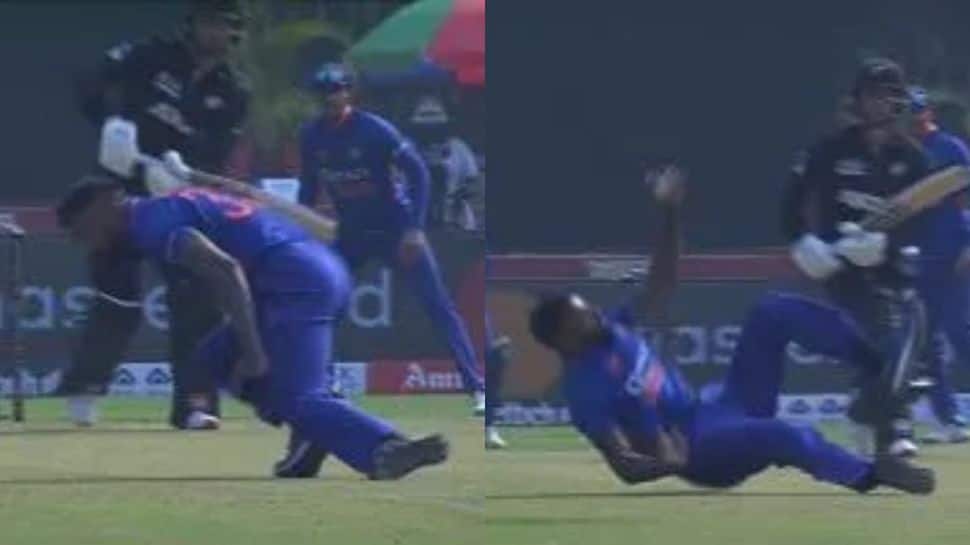 The second One-Day International of India’s three-match series versus New Zealand is presently underway in Raipur. With five wickets taken for 15 runs on the board, India had gained the upper hand against the Kiwis. Mohammed Shami took two wickets, but Mohammed Siraj and Hardik Pandya also contributed. Then, Shardul Thakur entered the game and finished off Tom Latham’s innings on one.

Talk about a stunning grab! _ _@hardikpandya7 took a BEAUT of a catch on his own bowling _ #TeamIndia | #INDvNZ | @mastercardindia pic.twitter.com/saJB6FcurA
— BCCI (@BCCI) January 21, 2023

Talk about a stunning grab! _ _@hardikpandya7 took a BEAUT of a catch on his own bowling _ #TeamIndia | #INDvNZ | @mastercardindia pic.twitter.com/saJB6FcurA
— BCCI (@BCCI) January 21, 2023

Wah… What a spectacular catch_

Social media is focusing exclusively on Hardik Pandya’s contribution. Devon Conway, the New Zealander’s opener, sought to drive the ball back, but instead gave the Indian all-rounder a low catch when Pandya pitched up to him. Conway was dismissed for 7 from 16 balls when Pandya made a spectacular left-handed catch, pulling the ball up before it reached the ground. Everyone, even the pundits, were in awe of the effort.

Daryl Mitchell and starter Finn Allen were both were dismissed by Shami for 0 and 1 runs, respectively. Henry Nicholls was dismissed by Siraj for 2 off of 29 balls. Earlier, Team India captain Rohit Sharma chose to field first after winning the toss at Raipur’s Shaheed Veer Narayan Singh International Stadium. The international game being played in Raipur is a first.