In a first for bloodhounds, Trumpet wins Westminster. 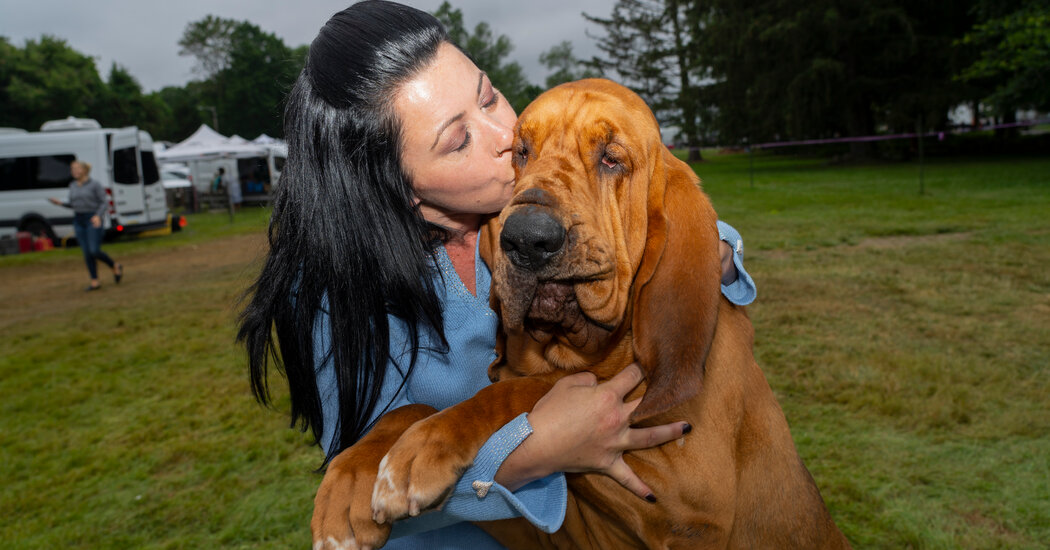 TARRYTOWN, N.Y. — Trumpet, a magnificently be-wrinkled and be-jowled bloodhound from Illinois, won Best in Show at the Westminster Kennel Club Dog Show on Wednesday night, nosing out a tough crowd of competitors that included a fluffy Samoyed, a silky Maltese and an all-business German shepherd.

Posing before a massive silver cup and a slew of ribbons in the traditional champion’s post-victory glamour shoot, Trumpet had little to say. But he looked every inch the champion, his lugubrious face and quizzical air for some reason adding to, rather than detracting from, his dignity. He is the first bloodhound to win Westminster.

“There were seven beautiful dogs in that ring. You know, I feel like sometimes a bloodhound might be a little bit of an underdog. So I was absolutely thrilled.”

Shockingly, she said, Trumpet competed in his first dog show in January.

Second place, or Best in Show Reserve in the parlance of Westminster, was awarded to a winsome French bulldog named Winston.

The show, traditionally held in the winter at Madison Square Garden, was moved for pandemic-related reasons to Lyndhurst, a country estate here, for a second year in a row. The preliminary rounds were held in outdoor rings and the group and Best in Show rounds were staged in a large tent filled with a small but enthusiastic number of dog fanciers.

It was hardly the same as a typical year, though the familiar sound of Frank Sinatra singing “New York, New York” filled the suburban air at the end of the evening. Back in Midtown, about 25 miles south, the Empire State Building lit up in purple in recognition of the dog show.

With his lumbering gait and ponderous manner, Trumpet, who is 4 years old, was not necessarily the first choice of spectators who seemed to be drawn to showier, more effervescent dogs. The largest cheers of the evening were reserved for Striker, a charismatic and blindingly white Samoyed who was one of the seven group winners.

Striker reached the finals last year, too, only to lose to a tiny Pekingese named Wasabi.

But Trumpet had that special something that champion dogs have. And he comes from winning stock. His great-grandfather, Trigger, once held the record for the dog with the longest ears, according to the Guinness Book of World Records. Trigger’s right ear was 13.75 inches long; his left was 13.5 inches long.