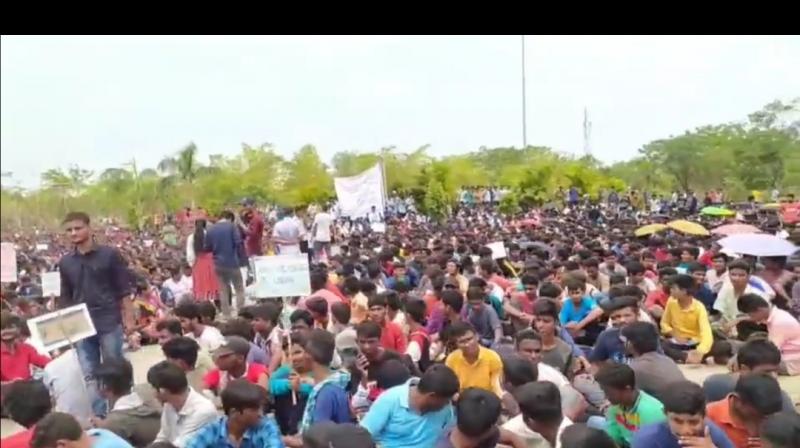 ADILABAD: The situation at IIIT-Basara continued to be on the boil for the third straight day on Thursday with agitating students declaring that they have no intention of letting up on their stir until their demands are met.

The students, whose set of demands that include the appointment of teaching staff, better food at the hostels, and amenities, including increased open hours for the library, were dismissed as “silly” by education minister Sabitha Indra Reddy which was roundly criticised by the students who stuck to their guns demanding that nothing less than a visit to the campus by Chief Minister K. Chandrashekhar Rao would change their minds, found some support from Governor Dr Tamilisai Soundararajan who on Thursday responded to Tweets from students and said she will take the issue to the notice of the state government.

Meanwhile, the students welcomed the appointment of Prof Satish Kumar Peddapalli, a professor of electrical engineering at the Engineering College of Osmania University as IIIT-Basara’s new Director. The students tweeted that while they welcomed his appointment and wished to see him on campus, the appointment would not result in their letting go of their agitation.

The agitation continued to find increasing political support with BJP state president Bandi Sanjay Kumar declaring on Thursday that he would be visiting the campus on Friday, even as the police on Thursday arrested CPI national secretary K. Narayana who wanted to meet with the students. The police also took into custody several parents from Vemulawda, Luxettipet, Warangal, Karimnagar and Adilabad, and other parts of the state.

Linga Reddy of Adilabad, a parent, was sitting in a pensive mood in front of the campus gaes, said he did not initially believe his son when he complained about the poor quality of education because of the large number of vacancies among the teaching staff. He said he had now changed his mind and believed what his son had been telling him all along.

The IIIT was on Thursday under a state of lockdown with the police not allowing anyone to enter the campus, amidst rumours that water and power supply have been cut to the campus in an attempt to pressurise them to end their protest.

Meanwhile, the student governing council of the Rajiv Gandhi University of Knowledge Technologies (RGUKT), Basara — as the institution is currently named — have launched an online campaign, detailing how the authorities were suppressing their rights.

Students also took offence to Nirmal collector Musharraf Ali Faruqui’s statement that they were set to resume attending classes after successful talks, claiming it as a lie. The Collector had also tweeted: “Requesting the students to get back to classes or studies and not get provoked”.