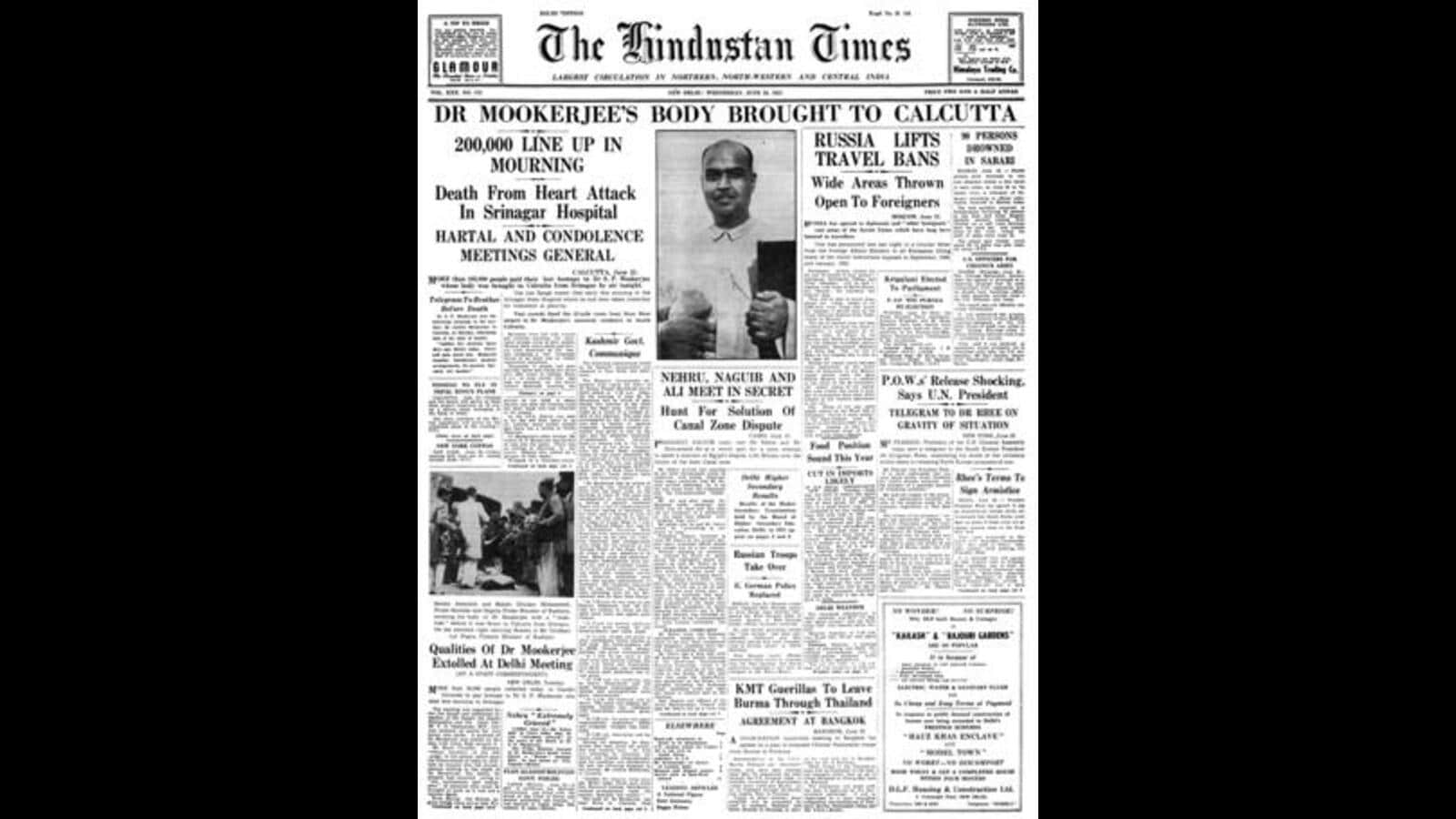 MORE than 200,000 people paid their last homage to Dr S. P. Mookerjee whose body was brought to Calcutta from Srinagar by air tonight.

The Jan Sangh leader died early this morning in the Srinagar State Hospital where he had been taken yesterday for treatment of pleurisy.

Balconies were full with women and children watching the decorated cortege move in slow strides. Women blew conch-shells and flowers were showered on the bier, and excepting a few occasional shouts of jai there was no visible commotion anywhere.

Thousands of people had gone literally dumb and would not move even after hours of waiting. Since 3 pm or even earlier they had kept GH Squatting on the street corners anxiously awaiting the arrival of tile body. A smart shower just after the evening could not deter those who had collected at the airport.

As the I.N.A. Dakota was seen in the sky and flash lights lit up the runway, many people sobbed ano there was a chorus of Vande Mataram.

Dr Mookerjee’s elder brother, Mr Justice R. P. Mookerjee was the first to step into the plane. There was no jostling or elbowing by the crown Silently they waited for a glimpse of their leader.

Wrapped in a chocolate-coloured embroidered Kashmiri shawk, Dr Mookerjee’s body looked as serene and majestic as ever. Mr Justice Mookerjee with tears in his eyes touched the face of his dear brother who was no more and applied sandal on his massive forehead.

A stretcher was sent in and close relations of Dr Mookerjee and some Jan Sangh leaders carried the body to an artistically decorated truck placed in the enclosure of the airport.

Wreaths were placed besides others on behalf of the West Bengal Government and the State Congress Committee.

Preceded by a procession of thousands shouting slogans, the truck moved slowly from the airport followed by scores of cars and trucks.

According to information available in New Delhi, Dr Mookerjee was admitted to hospital at 9 a.m. His condition became suddenly bad at about 6 p.m. when there were signs of weakening of the heart. At 1 a.m. his condition became worse and he died at 3-40 a.m. The death, it is believed, was due to a heart attack.

Dr Mookerjee had felt almost normal at 7-30 p.m. yesterday when he sent for his counsel, Mr Trivedi, and dictated notes to him in connection with his habeas corpus petition.

Immediately on receipt of the news, the West Bengal Government, Calcutta University and the Board of Secondary Education issued instructions to close educational institutions in the city for the day.

According to his family members, Dr Mookerjee had been suffering from fever for the past 10 or 12 days.

The Bengal Press Advisory Committee adjourned its meeting this morning as a mark of respect to the memory of Dr Mookerjee.

The Committee in a resolution said: “ The members the B.P,A.C. are deeply moved by the news of the sudden death of Dr Mookerjee, whose long and distinguished record of public service to the country is widely recognized.”

The police made a lathi-charge to disperse a crowd which was being addressed by Mr Mahendra Kumar Sharma, organizing secretary of the Kanpur Hindu Mahasabh4. Mr Sharma was arrested for addressing the crowd in defiance of prohibitory orders under Section 144. Cr. P.C.

All meetings, processions and demonstrations were banned in the city for a period of two months from today.

Considerable tension prevailed in the city following the refusal of the district authorities to grant permission to the Jan Sangh to hold a condolence meeting. The streets were patrolled by armed and mounted police

Earlier during the day. three Jan Sangh workers were arrested while they were announcing an appeal to observe hartal and to attend the public meeting which was at first proposed to be held but the idea about which was later abandoned.

A public meeting held under the auspices of the City Jan Sangh adopted a resolution urging the Government of India to appoint a commission of three Supreme Court judges to investigate the circumstances leading to the sudden death of Dr Mookerjee.

Many shops in Katra and Chowk, city’s main business centres, were closed in the afternoon.

All the shops and markets in Jammu city were closed.

At a public meeting held under the auspices of the Praja Parishad, speakers criticized the State Government for not issuing health bulletins on Dr Mookerjee’s worsening condition. Dr Mookerjee. some of them alleged. had been ill for three days.

They appealed to the people to observe hartal for two days.

Earlier, the Praja Parishad took out a procession through the main streets of the city. Many in the procession carried black banners.

Though there is a ban on meetings and processions in the city, the police did not interfere.

At a largely attended public meeting qualities of head and heart of Dr Mookerje were enumerated by various speakers. Touching references were made to his sudden and unexpected death.

The Bombay Pradesh Congress Committee at an urgent meeting passed a condolence resolution.

Mr S. K. Patil. president of the B.P.C.C.. in a glowing tribute to Dr Mookerjee, said that in his death the country had lost a great son and a patriot whom it would be difficult to replace.

A resolution passed by the Indian Merchants’ Chamber said: “ Besides being an outstanding political leader of all-India eminence, Dr Mookerjee was a great educationist, an able administrator and a keen parliamentarian.

All markets in Amritsar remained closed on Tuesday as a mark of respect to the memory of Dr Mookerjee.

Bhatinda: An appeal by leaders of all parties was issued to observe a hartal to mourn Dr Mookerjee’s death. Accordingly, all markets were closed

Bombay: “ Besides being an outstanding political leader of allIndia eminence, he was a great educationist, an able administrator and a keen parliamentarian,” says a resolution passed by the Indian Merchants’ Chamber on Dr Mookerjee’s death. The President of the Chamber has been authorized to communicate the resolution to the bereaved family. The meeting of the committee adjourned as a mark of respect to the memory of the departed soul.

Jaipur: Shops remained closed as a mark of respect to the memory of Dr Mookerjee. There was no transaction in the local Bullion Exchange.

Khurja: The Jan Sangh, at a meeting, passed a condolence resolution on Dr Mookerjee’s death. The market remained closed.

Lucknow: Most of the shops in Aminabad, Lucknow’s main market, remained closed as a mark of respect to the memory of Dr Mookerjee.

Ludhiana: Shopkeepers observed hartal as a mark of respect to the memory of the late Dr Mookerjee.

Poona: An appeal signed by prominent citizens was issued to observe a peaceful hartal throughout the city. Shops were closed.

The University of Poona and the Municipal Corporation remained closed.

An appeal signed by prominent citizens was issued to observe a peaceful hartal throughout the city. Shops were closed. Shops remained closed and condolence meetings were also held at various other places including Lucknow. Khurja. Jaipur, Amritsar. Ludhiana. Jullundur, Ambala, Moga, Bhatinda. and Indore

Violation of some green regulations may be decriminalised