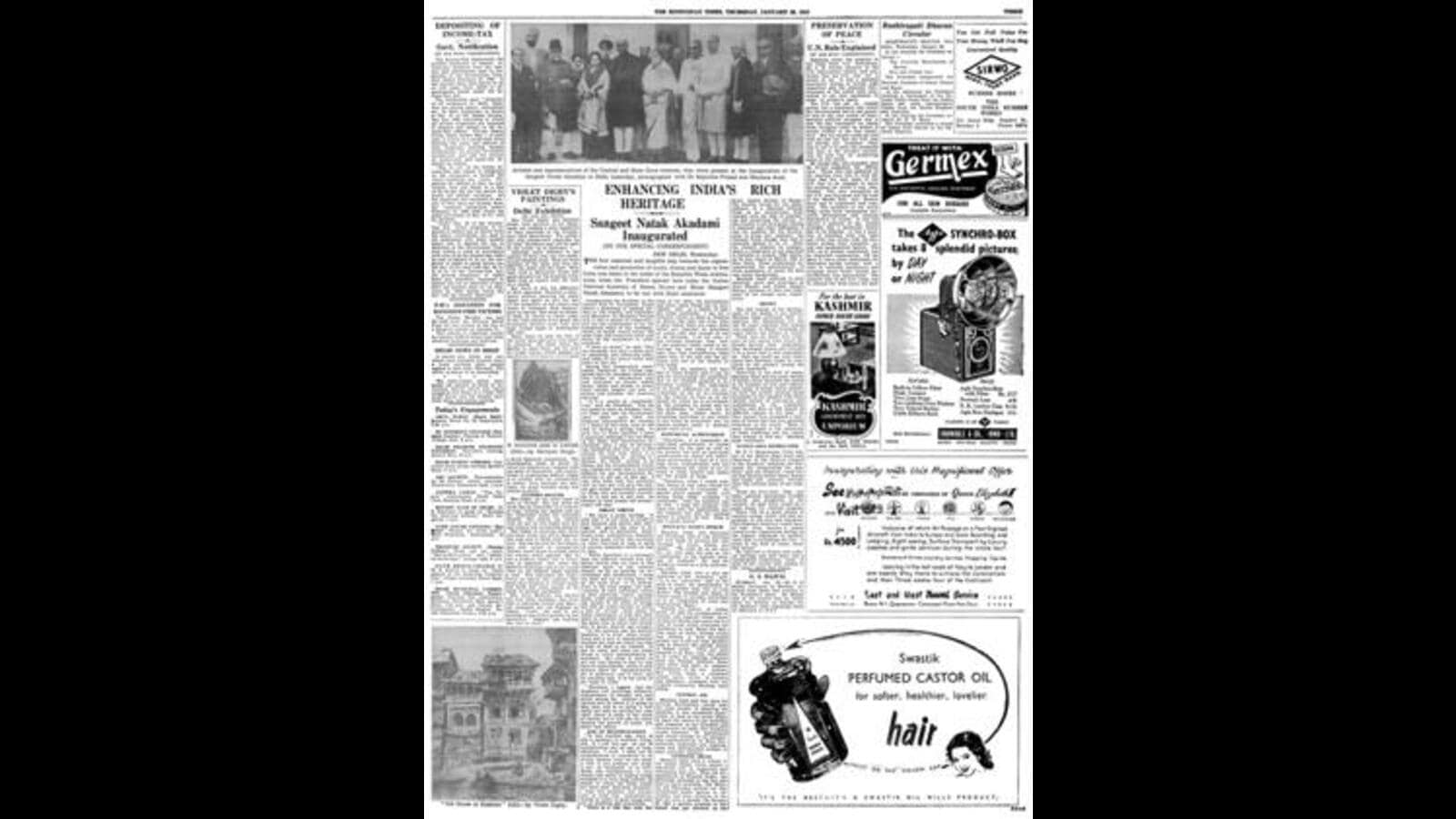 The first essential and tangible step towards the regeneration and promotion of music, drama and dance in free India was taken in the midst of the Republic Week celebrations, when the President opened here today the Indian National Academy of Dance, Drama and Music (Sangeet Natak Akadami) to be run with State assistance.

Inaugurating the Academy in the Central Hall of Parliament House before a gathering of leading artistes of the country, and diplomats and Ministers. Dr Rajendra Prasad said it was a matter of congratulation for our countrymen to lay the foundation today of this Academy, which, he hoped, would occupy the same high and honoured place and status as the Academies in other countries.

“I have no doubt,” he said, “that the Academy will play a great part in reforming and reshaping India, and India of the future could well boast of this day.”

Saying that preservation really meant recreation. Dr Prasad suggested that the Academy should not only collect all Information that was available to enable Indian music, dance and drama to attain their ancient heights but also to enrich and enhance the precious heritage. “

It is a matter of congratulation,” said the President, “ that we are going to have an academy started today and that the Government have taken upon itself the financial responsibility for running it. I desire at this time, even at the risk of raising a jarring note, to give two or three cautions. I have a suspicion, although I am the Head of the State, that Government institutions have a way of developing themselves and that way is not always the best way. There is a certain cramping or limiting influence for which nobody is to blame; but the circumstances which are created are such that it becomes difficult for any Government institution to get out of that rut. I can only hope that this academy will be free and will give the fullest and widest opportunity possible to those who are actually interested in it and not in any way be limited by what people call bureaucratic red tape.

“ We have a great heritage in arts and it is our duty to preserve and enhance and enrich that heritage. Our genius has been to reconcile and to synthesize, sometimes even contradictory elements, and this great virtue has somehow or other survived so long in spite of various calamities which we had to face.

“ While, therefore, it is necessary that the different schools and different strains that we have in the different parts of the country should, as far as possible, be coordinated and synthesized, I hope we shall not try to bring them all on the same level or to destroy, even in the least degree, the individuality of each particular school in each particular region; because India, while presenting a confounding variety in all kinds of things, has still an under-current of unity, a sort of overall unity which is really remarkable. I wish this Academy to maintain that unity and at the same time to allow this variety also to grow, flourish and prosper.

“ In the machine age the general tendency is to level down everything and a sort of standardization becomes not only an object but also a kind of ideal to be reached. It has its value, and there are many things in which standardization is necessary. But when it comes to art, my own feeling is that by any kind of regimentation, which is only another name for standardization, art is destroyed; and if there can be anything ugly, it is the work of art made to order.

“ Therefore, I suggest that the Academy will encourage initiative, independence of thought, and also action among the votaries of the various arts of which it is going to take care, and in so doing, it will really not only be serving our own ideal, which is unity in the midst of variety, but it will also be really helping the growth of music, art, dance and drama.

“ In this machine age, there is also a tendency to multiply things, and if I call this age an age of multiplication and an age of magnification, I trust I shall not be misunderstood or considered to be wrong, because what we see today is this: if you produce one thing, it can be multiplied in no time. While this multiplication is very helpful and useful in making things available to a very large number of people to whom the thing would not have been otherwise available. I hope this academy will always bear in mind that multiplication should be really of good things and not of anything and everything. “

“There is a risk that with the help of the radio, the gramophone and films, many things can be multiplied, and, as a matter of fact, are being multiplied. I am not a frequent visitor to films or theatres or places like that; but from what I have heard, there are many films which are regarded by guardians of young men and women as not at all desirable. I do not want to use stronger language than that. If the academy really wants to encourage the real thing, it should take care that multiplication takes place only of the real and the genuine and not of the tawdry or evil thing.

“ I hope the academy will bear this in mind always, and it can do this by encouraging the individual. Art in its ultimate analysis is individual creation. The individual is no doubt influenced by the surroundings, by the air he breathes, by the country he lives in, by the people by whom he is surrounded, by the company he keeps and by the profession he follows; but at the same time, unless there is something individual in him which is not found in everybody else, he cannot produce really a genuine great work of art.

“ Therefore, while I would wish that things of real value should be made available to everybody, we should guard against really evil things being made available to everybody. And the academy can do this. I hope the academy will have not only the opportunity and the freedom but also the burning desire to achieve all this. Then it has a great future.”

Maulana Azad, who welcomed the President, said it was essential for free India to develop her rich heritage of music, drama and dance. “ We must do so not only for our own sake but also as our contribution to the cultural heritage of mankind.” He said the Academy would be a fully autonomous body.

Maulana Azad, who is also the chairman of the Academy, said: “ It is my conviction that in the field of music, the achievement of India is greater than that of even Greece. The breadth and depth of Indian music is, perhaps, unrivalled as is its integration of vocal and instrumental music.”

Tracing the history of Indian music, he said the amalgamation of Persian and classical Indian styles during the Middle Ages gave rise to a type of music which combined the excellence of both. When the Muslims came to India, Persian music was already a fully developed system, but it did not take Muslims long to discover the special merits of Indian music. They not only adopted it as their own, but added to it richly by adapting elements from the Persian tradition. Since then there had been no separate development of the two systems. But within India, a combined stream grew which, in richness and splendour, surpassed both the original tributaries, Maulana Azad added.

Maulana Azad said that since the Central Government would bear the main burden of financing the academy, it was considered appropriate, at least in the initial stages, to leave the choice of the chairman and treasurer to the President and Government of India. The Academy would, however, be autonomous and would include in its membership representatives of State Governments, important arts organizations and distinguished artistes in their personal capacity.

Maulana Azad paid a tribute to the Indian States, which played a significant role in supporting and developing fine arts. With the disappearance of Princely Order, the patronage extended to the fine arts was no more available. The Minister for Education pointed out that enlightened public opinion in the country had been conscious of the fact for over a decade. On January 26, 1945 a specific proposal in this behalf was put forward by the Royal Asiatic Society of Bengal. The Society moved for the establishment of a National Cultural Trust as an autonomous body charged with the task of stimulating and promoting the culture of the country in all its aspects. Owing to financial and other difficulties it was not possible for the Government to bring into existence the Cultural Trust, though they had in principle agreed to do so. After the country attained its independence, a conference on art was held in Calcutta in August, 1949, followed by two others in March, 1951 in New Delhi. These conferences recommended the establishment of three academies, of which the first was being inaugurated.

Maulana Azad referred to such immortal poets and musicians as Amir Khusro and Sultan Husain Sharqy, inventor of sitar and originator of the kheyal style, respectively.

The full history of the development of the drama is not known, Maulana Azad continued. New researches into Egyptology for the last 50 years indicated that drama was popular in Egypt thousands of years before the advent of Christ.

There was no doubt that whatever be the source from which the Greeks derived their inspiration, they developed drama and brought it to a level that is still unsurpassed. Still one could say with confidence that Kalidasa might be compared to the greatest among the Greek dramatists.

Referring to the field of dance, Maulana Azad said the great variety of Indian styles attracted the notice of all students of arts and culture. The range of Indian dance extended from the strictly classical styles developed in the temples with their infinite variety of expression and modulations to the wonderful rhythm and flow of folk dances in different regions of the land. In their variety they presented a richness of forms that had few parallels elsewhere in the world. “ What is most remarkable is the continuity of these traditions and the vigour they display to this day,” Maulana Azad concluded.

Mr P. V. Rajamannar, Chief Justice of the Madras High Court and Chairman of the General Council of the Academy, thanking the President for inaugurating the Academy, said the Academy would foster and develop Indian dance, drama and music and promote through them the cultural unity of the country.

When the Five-Year Plan and other national enterprises brought security and prosperity to the country, he said, there would be a great scope for cultural progress. “ There will be a great release of creative energy which will find expression in the arts and literature. This National Academy would have, by that time, become a potent countrywide organization setting up the highest standards of achievement and coordinating all that is great in the field of music, dance and drama.”

He referred to India’s rich cultural heritage and said there was a fundamental underlying unity in spite of the variety that existed in her music, dance and drama.