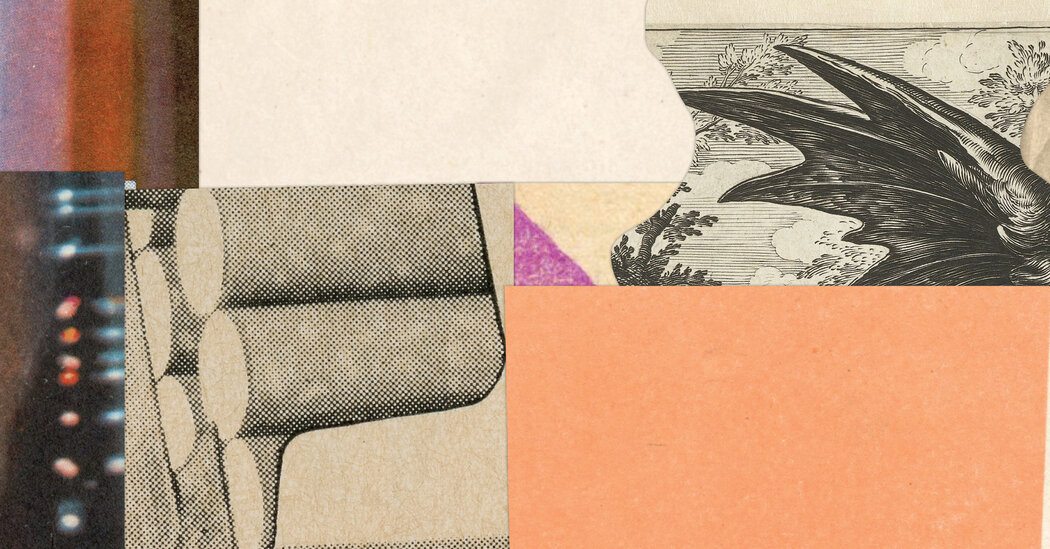 Dream sequences. References to Heidegger and Red Lobster. Special appearances by a dog named Freud and a metaphysics-spouting dragon. A woman posing as a Surrealist painting of a woman looking in the mirror.

Like Honoré de Balzac’s “Contes Drolatiques” (or “Droll Stories”), Iris Smyles’s DROLL TALES (292 pp., Turtle Point, paper, $18.95) exhibits many elements of absurdist fiction: daft humor, illogical juxtapositions, the philosophizing of the banal, an obsession with meaninglessness. Its tone, however, is far from droll; what’s remarkable about this book is its exuberance.

In “Medusa’s Garden,” in which a former ballerina becomes a living statue, or “Shelves,” about a poet who writes corporate manuals, Smyles revels in the antics of her prose. She tosses off names (Rabelais! Dalí! Kierkegaard! Alf! Casey Kasem!) as though to say: “Look! How arbitrary!” And yet, though constantly turning up new ironies, the book is rarely, if ever, sarcastic.

It’s arguable whether a story written entirely in pig Latin, or another composed of sentence diagrams, makes any meaningful advance on its premise. Other times, Smyles’s habit of punning or cracking (deliberately?) lame jokes can make a reader suspect that someone else is having all the fun.

And so what if she is? No matter the outcome, “Droll Tales” is written in such a way that seems to announce its author very much enjoyed writing it. It’s a question worthy of a philosophizing Smyles character, whether an artist’s own enthusiasm and inspiration necessarily translate into her audience’s inspiration, too.

Caitlin Macy’s second collection, A BLIND CORNER: Stories (211 pp., Little, Brown, $27), is not exactly satirical, but its best lines have the sting of topical social critique. A do-gooder family pays a charity visit to Ma Moore’s “dilapidated” compound, dropping off groceries and cigarettes and the clothes they pay her to iron. A “nicely educated” woman makes a “moral” decision not to build a career, and turns instead to part-time gigs “house-sitting, dog-sitting, watering plants.” A sporty mom is psyched to find that her friend has “ketones in her urine.”

This type of canny writing affords a certain reading pleasure: recognition, even self-recognition, as well as some light, judgy fun. The women and girls in “A Blind Corner,” all privileged to a certain degree, are profoundly ill at ease, whether in Tuscany or Acapulco, at the private Country Day school or “fooling around” in the smelly back seat of a pickup truck, in “urban liberal” enclaves or at a dinner party in a vacation town where a husband mixes “G and T’s” and his wife’s outfit “evokes the Reagan era.”

Macy calls out her protagonists’ contradictions: both compliant and contrary, people-pleasers and snobs. Story titles such as “We Don’t Believe in That Crap,” “Residents Only” and “One of Us” belie a group mentality despite the characters’ refusal to be seen as “typical.”

These tensions need no resolution: We yearn for individuality even as we yearn to belong — generating anxiety, but also comedy. “You probably think I’m ridiculous!” an American woman says to an Italian hotelier. “‘I?’ Luigi smiled carefully. ‘No, no.’”

In the title story of Ru Freeman’s collection, SLEEPING ALONE: Stories (202 pp., Graywolf, paper, $16), Sameera, an administrative assistant at a college in Maine, is tasked with organizing a Sharm el-Sheikh-themed pool party for the white men who run her department, “the rag that is called Middle Eastern studies.” To teach them a lesson, along with making lamb kebabs and fruit lassis, Sameera pours gallons of cleaning solvent into the pool, and delights in watching the “red irritation spread across their white skins like blood.”

For all Sameera’s disdain for these white men’s inauthenticity and appropriation, in other stories Freeman is guilty of her own authorial overreach. Far-flung settings and superficially drawn narrators read more as caricatures than whole characters: the war veteran whose trauma manifests in horrific violence, the 16-year-old Latina who has “beaten the odds” by not getting pregnant before her quinceañera, the “solid Black” teenager who has to be “the man of the house” while his father is “M.I.A.” Italian siblings in a predominantly Jewish apartment building in New York call their bedroom “the Swastika Room,” because, the brother tells his sister, “you and I are merely surviving.”

In a broad treatment of identity politics, these particular stories suffer from a lack of imaginative license compared with others in the collection that sing with specificity. In “First Son,” children visiting their grandparents’ island receive “kurumba from the young coconut trees, the clear water sweet and cool in our mouths, the flesh inside scooped from the spoon-shaped device” that’s been “carved out of the husk.” Here, the authenticity is in the aesthetic detail.

Something I learned when I researched the title of Kathryn Harlan’s debut, FRUITING BODIES: Stories (242 pp., Norton, $25): The mushroom is not the entire fungus, but only its reproductive apparatus, its “fruiting body.” Distinct from the roots, the mushroom is just the stem, cap and gills.

The fruiting bodies in this collection are at once figurative and disturbingly literal. In the title story, the narrator forages mushrooms off the body of her lover, Agnes (“in the valley of skin between her breasts, a miniature grove of enokis was sprouting”; “her chest will sometimes grow truffles”). Together they eat them for sustenance, “over rice with vegetables and a hint of balsamic.”

Harlan’s narrators, mostly queer women, are fascinated, even obsessed with bodies — those of their lovers, mothers, fetuses — and their regeneration, death, even consumption. Nibbling one’s cuticles is described as “autocannibalistic,” pregnancy a “tumor.” “Parasitoid wasps,” one narrator points out, lay their eggs in caterpillars; they “deposit their larvae beneath the host’s skin.” Pubescent girls submerge themselves in a lake poisoned with algal bloom.

The story “Is This You?” raises the stakes from the intimate to the existential. When Maura’s mother publishes a nonfiction book about her daughter’s life, Maura goes into a kind of narrative tailspin in an effort to reclaim her own story. She imagines a “litany of selves” at various ages, “a Maura for every essay.” There’s the “suiciding Maura,” the Maura with a sweet tooth, the Maura who is an infant in the narrator’s arms. As though speaking to all of the women in this collection, one of the Mauras asks the narrator: “Are you sure your version is the right version?”

Yoon Choi is the author of “Skinship.”