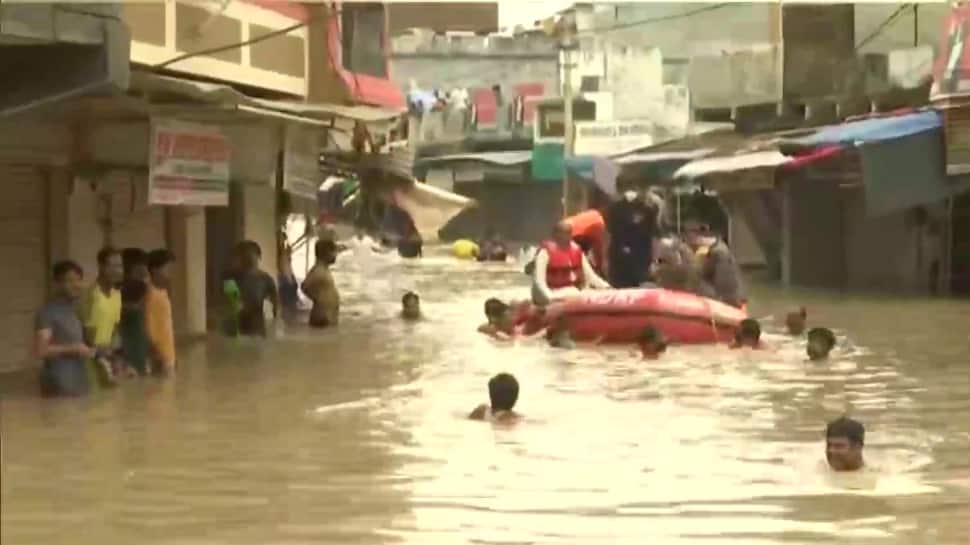 Kota: Heavy rainfall in the last 24 hours has led to a flood-like situation in Rajasthan’s Kota, Jhalawar and surrounding districts, officials said on Monday. Low-lying areas have submerged under water owing to the downpour and water released from the Kota barrage, they said, adding around 60 people were shifted to safer places while schools and coaching institutes in Kota and Bundi remained closed on Monday.

In Kota’s Pragati Nagar, a seven-foot-long crocodile was spotted in a residential area creating panic among the locals, however, the reptile was rescued.

According to the Meteorological department, extremely heavy rainfall was recorded in isolated areas in Kota and Jhalawar district during the 24-hour period ending 8.30 am on Monday. Dag in Jhalawar recorded the highest 234 mm rainfall followed by 224 mm in Kota city during this period, officials said.

Increased influx of water in Kota

The inflow of water increased in the Kota barrage on the Chambal river due to rainfall in the catchment area of Rana Pratap Sagar dam (Chittorgarh) and Jawahar Sagar dam (Kota), an official of the Kota district administration said.

Thirteen out of the 19 gates were opened last night to release the water and one more gate was opened on Monday, they said. So far, nearly 3.83 lakh cusec water has been released from the barrage. A similar step was taken in Jhalawar to release excess water from dams.

Collector O P Bunkar conducted field visits in Nayapura Kacchi Basit and Balita road on Monday morning and issued necessary directions to officials to make necessary arrangements in view of the heavy rainfall warning and release of water from the barrage.