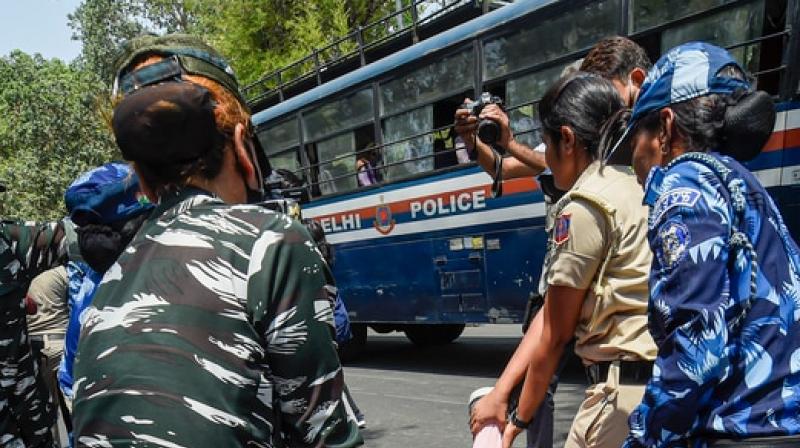 New Delhi: The Congress on Wednesday accused the BJP government of blocking political activities by preventing party workers from entering its headquarters, and said the ruling dispensation will have to face consequences.

On the third consecutive day of former Congress president Rahul Gandhi’s questioning by the ED in the National Herald money-laundering matter, the party’s Chief Ministers Ashok Gehlot and Bhupesh Baghel said this was the first time in the country’s history that a national party’s offices were put out of bounds of its own workers.

“The atmosphere in the country is in front of everyone to see. I could not bring my own staff inside the AICC office. No one else is allowed. Political activists cannot enter their party offices. This is happening for the first time in the country,” Baghel said.

“They are trying to stop political activities of leaders. You can only suppress someone till a limit, and now, all limits have been crossed,” he said.

Baghel’s convoy was stopped by the Delhi Police on Tuesday from visiting the Badarpur police station, where some party leaders were under preventive detention for violating prohibitory orders in central Delhi.

The Chhattisgarh chief minister said the BJP’s “nationalism is imported”, under which “whosoever raised a voice against them is being crushed”. He said Rahul Gandhi was being targeted for questioning the government on issues of governance and public concerns.

Reiterating the charge that the ED summons against the Gandhis were “political vendetta”, Gehlot said these past eight years would be marked as the “black chapter in India’s history”.

He cautioned that the atmosphere in the country was “very dangerous”, and recalled Gandhi’s recent remarks made at a London event where he had said “kerosene had been poured all over India”.

“No one knows what will happen tomorrow. There is a sense of fear in every alley, every home,” Gehlot said, as he appealed to Prime Minister Narendra Modi to address the nation and denounce violence.

“Party workers are stopped from entering our own office. Democracy is in danger, and the Constitution is being violated. The approach of RSS-BJP is very dangerous,” he said.

On the National Herald case, Gehlot said Rs 90 crore was given in 100 installments to revive the newspaper, and there was no wrongdoing.

“The ED notices have been given only to harass and target the Gandhis. The government will have to face the consequences as people have understood everything,” the Rajasthan chief minister said.

The Congress said it would later take a call on whether to meet the President and the prime minister to raise the ongoing “high-handedness” against its workers.

With party leaders alleging that workers were stopped from entering the AICC office on Tuesday and Wednesday, Congress general secretary Ajay Maken said the opposition had a role in keeping democracy alive, and the current crackdown will not be tolerated.

“We want to warn the central government to allow democracy to function normally and not try to suppress us,” he said.

He demanded that Gandhi’s questioning be live-streamed, adding, “Let the prime minister and the home minister also join the probe and sit there, and let the country see this is only a facade because there is no case and nothing to ask.”

AICC general secretary Mukul Wasnik said the central government was trying to suppress the Congress to realise its dream of a “Congress-free India”.

“This is not just an action against Rahul Gandhi and Sonia Gandhi but an attack on the Congress party, which has played a significant role in the freedom movement of the country. We will oppose this reign of dictatorship,” Wasnik said.

Top Congress leaders have been courting arrest in solidarity with Rahul Gandhi for three days, with central Delhi under section 144 of CrPC, which bans the gathering of more than four people.