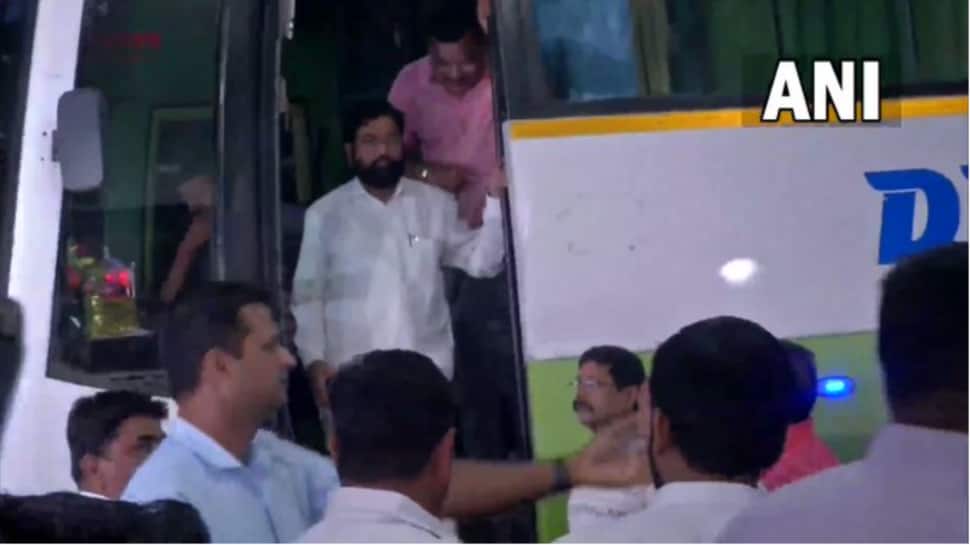 New Delhi: Maharashtra cabinet minister Eknath Shinde and 40 rebel MLAs of Shiv Sena on Wednesday (June 22, 2022) left their hotel in Gujarat’s Surat and are now being flown to Guwahati in Assam. According to news agency ANI, some 7 independent legislators, who were staying at Le Meridien hotel in Surat, have also arrived in Guwahati along with Shinde.

These MLAs sat in a luxury bus during the early hours of Wednesday as they were being taken to the airport, from where they will be shifted to another BJP-ruled state Assam by air, news agency PTI reported.

“We have not left Balasaheb Thackeray’s Shiv Sena and will not leave it. We have been following Balasaheb’s Hindutva and will carry it further,” Eknath Shinde told reporters at the Surat airport.

We have not left Balasaheb Thackeray’s Shiv Sena & will not leave it. We have been following Balasaheb’s Hindutva & will carry it further, said Shiv Sena leader Eknath Shinde at Surat airport in Gujarat pic.twitter.com/SVnGziEGxO
— ANI (@ANI) June 21, 2022


Earlier on Tuesday, Shinde had taken a veiled dig at Shiv Sena for joining hands with Congress and NCP to form the Maha Vijas Aghadi government in Maharashtra.

“We are Balasaheb’s staunch Shiv Sainiks … Balasaheb has taught us Hindutva. We have never and will never cheat for power regarding Balasaheb’s thoughts and Dharmaveer Anand Dighe Saheb’s teachings,” he had tweeted before dropping “Shiv Sena” from his Twitter bio.

The Maharashtra minister and some MLAs reached the hotel in Surat late Monday night, hours after Legislative Council polls which saw the BJP winning the fifth seat despite not having enough numbers in the Assembly, possibly due to suspected cross-voting from the ruling bloc besides support from  Independent MLAs and those from smaller parties.

Meanwhile, the Shiv Sena has moved its MLAs to hotels to ward off poaching bids after Shinde rebelled against the party along with some fellow legislators.

Violation of some green regulations may be decriminalised