Congress stages protests across Telangana over ED action on RaGa 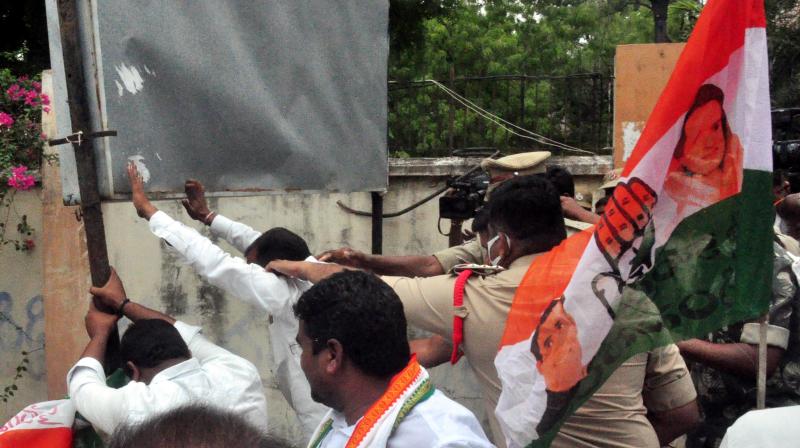 HYDERABAD: Congress leaders and activists staged protests in front of Central government offices across the state on Friday against the alleged harassment by the Enforcement Directorate (ED) of former party president Rahul Gandhi. In response to a call given by the state Congress president A. Revanth Reddy, district party units staged protests at railway stations, post offices and telecom offices in their respective district headquarters.

The police were deployed in large numbers and they took Congress leaders into custody and released them later on personal bond. Congress Legislature Party leader Mallu Bhatti Vikramarka took part in the protest at Khammam district headquarters on Friday. He slammed the BJP government for harassing Gandhi family on fabricated charges.

Bhatti warned that the BJP offices would be wiped out if the Congress cadres revolted on harassment of Rahul Gandhi. He alleged that RSS activists attacked the Congress workers in New Delhi in the guise of mufti police. He said not only the Congress activists, but the people in the country would revolt against the BJP, if it continued to harass the Nehru-Gandhi family. “The BJP government is afraid of the National Herald newspaper for highlighting the misdeeds of the Central government,” he said.

The CLP leader said the Congress set up a non-profit trust to reopen the National Herald newspaper. The BJP government fabricated financial offence cases against Rahul Gandhi to defame him, he said. The Congress would continue its agitation against the ED, he added.