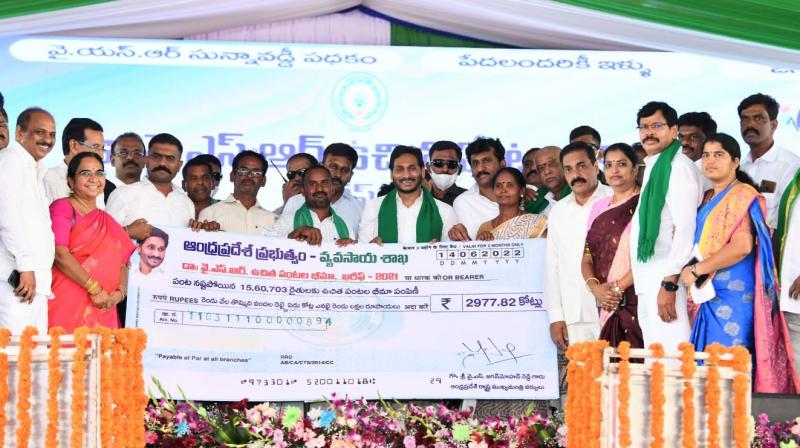 ANANTAPUR: Chief Minister Y.S. Jagan Mohan Reddy came down heavily on the opposition parties over attempts to defame the government in relation to the SSC results, the according of the Ambedkar name to Konaseema district and crop holiday.

“My government will continue implementing various welfare schemes despite budgetary constraints,” he asserted.

Lashing out at the TD and JS for their attempts to disturb peace the state and reacting to the SSC results, Jagan said, “Gujarat scored 65 per cent pass while AP achieved 67 per cent in recent SSC results. We also offered chance for students to appear for supplementary but treated them as regular.”

He said that as long as the people of the state-supported him, his government will continue taking care of them.

Addressing the gathering at CK Palli in Satyasai district on Tuesday, the chief minister said Ananthapur area was earlier known as a drought-prone district. The farmers’ fortunes have changed in the last three years due facilitation of adequate water sources for their farms.

He reiterated that his government is committed to the welfare of farmers and development of the agriculture sector, wherein about Rs 1,28,000 crore was given to farmers under various schemes in the last three years.

Some Rs 6685 crore was remitted into the accounts of 44.28 lakh farmers under free crop insurance since the inception of the YSRC government, he said, and recalled that the previous Telugu Desam government had paid only Rs 3411 crore, benefiting 30.85 lakh farmers in its five-year rule.

Lambasting the opposition TD and Jana Sena, the chief minister said they were deliberately indulging in malicious propaganda to mislead the public. Referring to Pawan Kalyan as the adopted son of Chandrababu Naidu, the CM said he couldn’t show a single family of farmers with the Pattadar Passbook that was left out by the government without paying compensation upon losing the breadwinner.

He said that the government is paying Rs 7,00,000 as compensation even to the families of the tenant farmers with CCRC cards.

“Pawan Kalyan didn’t volunteer to visit farmers’ families during the TD term, even when the TD did not pay any compensation to the kin of the deceased farmer’s families,” the CM said, and added that Pawan’s visit to the districts was only to help Chandrababu.

“All political rivals have united to spread false propaganda as the nation is looking upto Andhra Pradesh and its good practices,” the CM added.

As for the naming of Ambedkar Konaseema District, Jagan said Chandrababu and Pawan were politicising this by opposing the naming of Konaseema district after the framer of the Constitution. He slammed Naidu saying he was behind the farmers agitating for crop holiday and blamed the opposition for the violence in Amalapuram and Konaseema.

Jagan termed Konaseema as one of the peaceful places in the state and said anti-social elements now disturbed the atmosphere. Unlike the previous government, which failed to credit the amount of paddy procurement to the farmers, the present government is crediting the amount within 21 days after the procurement, even though the funds from the Center were being delayed, the CM said.

Explaining about farmers welfare, CM Jagan said that the government had cleared pending arrears of Rs 717 crore left unpaid by the previous TD government towards crop insurance along with other dues.

Before Getting First Job, Understand Employment, Productivity & How is it Calculated With #ClassesWithNews18