Can resign but will next CM be a Sainik: Uddhav Thackeray 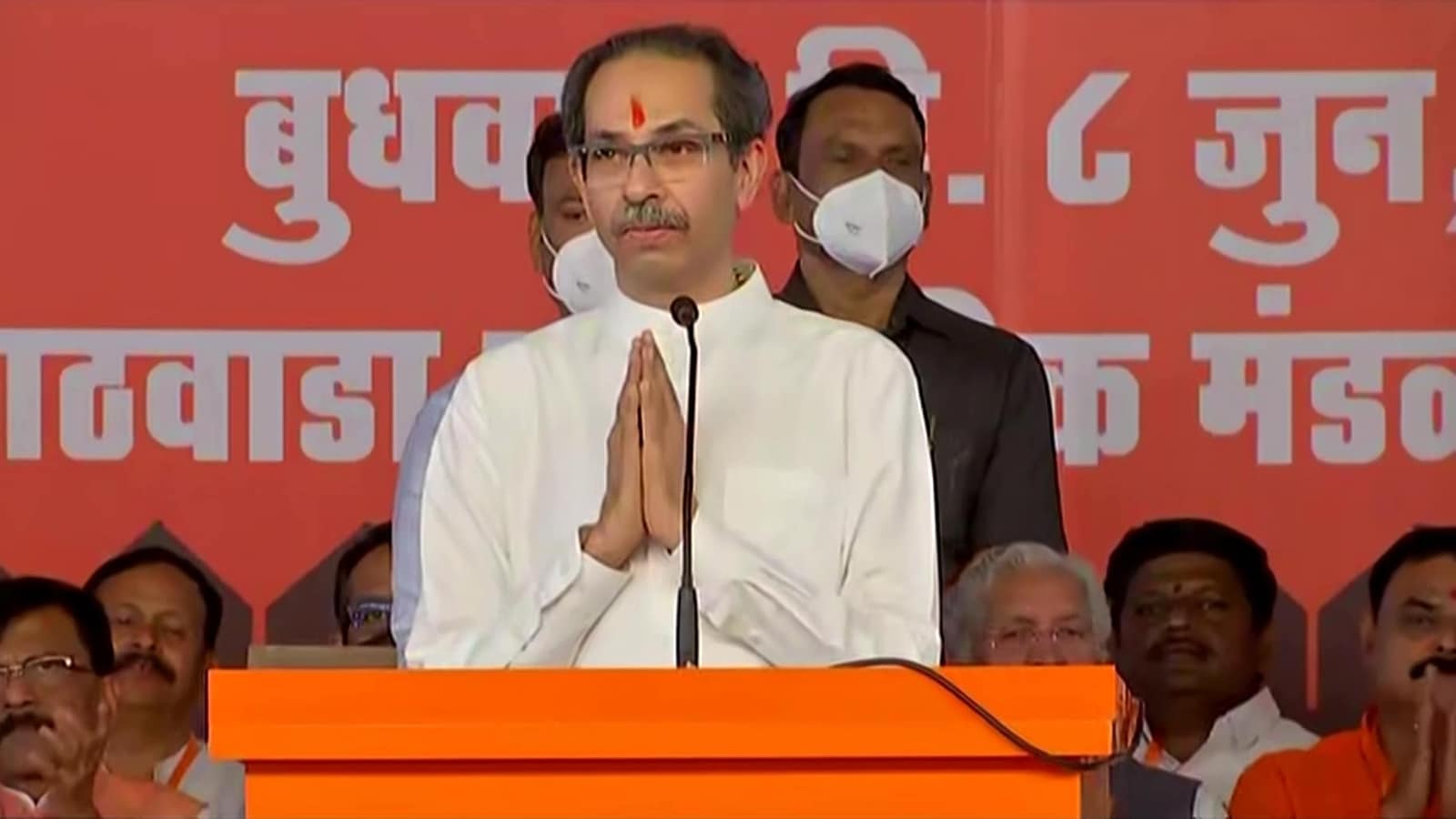 The Maha Vikas Aghadi (MVA) was battling for its political survival on Wednesday as chief minister Uddhav Thackeray made a last-ditch emotive appeal to rebel lawmakers who are threatening to pull down his government and shatter the three-party ruling alliance.

Thackeray’s speech, broadcast live on social media, came on a day marked by high drama as rebel MLAs – led by his one-time lieutenant and state urban development minister Eknath Shinde – flew from Surat to Guwahati under police protection, and gained in strength.

“If any of them (rebel MLAs) come to me or even give out a statement, and say that they do not want me as CM, I am ready to resign… I am preparing my resignation letter,” he said, breaking his silence on the biggest crisis of his career. “But can they guarantee that the next CM will be a Sainik?”

The message appeared to be directed at Shinde, who is tipped to become deputy CM in case he sides with the BJP and manages to get the rebels needed to split the Sena without attracting disqualification.

In Mumbai, an increasingly desperate Thackeray remained huddled in meetings with coalition partners, and in the evening, moved out of the CM’s residence to family home Matoshree, the seat of Sena power and the residence of his father, Balasaheb Thackeray, ostensibly in a bid to be seen as the rightful heir to his legacy.

Television beamed visuals of Thackeray and his family driving out of Varsha bungalow as crowds of Sena supporters jostled to catch a glimpse, and reaching Matoshree amid a throng of people, even as the government inched closer to collapse as two more Sena legislators joined the rebel camp in Guwahati late in the evening.

Shinde remained adamant that Sena needs to snap ties with the Nationalist Congress Party (NCP) and Congress to quell dissidence.“It’s essential to get out of the unnatural alliance for the survival of the party. Decisions need to be taken now in the interest of Maharashtra,” tweeted Shinde in Marathi.

The crisis broke late Monday night after the MVA suffered a loss in the legislative council polls, its second defeat in a week after the RS elections. Shinde and his loyalists drove to a hotel in Surat, where they camped all day, only moving to Guwahati around midnight amid heavy police presence. In Mumbai, the 61-year-old Thackeray harked on the Sena’s legacy and his position as the scion of Balasaheb. “We have seen several challenges when we were not in power. What’s worse that could happen; we will fight. Till the common Shiv Sainik is with me, I am ready to face any challenge.” “If my own people do not want me, I don’t want to stick to power. I am ready with my resignation letter even if one rebel comes and tells me face to face that he doesn’t want me as chief minister,” he said.

In the 18-minute speech, he admitted to being inexperienced, thanked his coalition partners, and said that a surgery prevented him from meeting people in the past two-three months. “These days there is a talk about the Shiv Sena not being the party of Balasaheb and giving up Hindutva…hindutva is Shiv Sena’s breath. I was the first CM to speak about hindutva in the legislative assembly,” Thackeray said.

As night fell, Thackeray was locked in meetings with NCP chief Sharad Pawar and Congress’s Kamal Nath, hammering out a plan to reach out to the rebels. “The chief minister is moving from Varsha to Matoshree. We are not enamoured by power. We are warriors, we will continue to fight and the truth shall prevail. Matoshree is the main power centre for Shiv Sena,”said Sanjay Raut, MP.

The 58-year-old Shinde is a Sena strongman who rose through the ranks in the 1980s and became the de facto number two in the party cadre after the death of founder Bal Thackeray. But the rise of a new guard of more moderate faces in the party, led by Aaditya Thackeray, may have left him and other members of the old guard (who were more intimately tied with right-wing and hardline regional politics) disenchanted, especially after the Sena broke its 25-year-old alliance with the BJP in 2019. Shinde, who spoke to Thackeray’s emissaries on Tuesday without any breakthrough reached, continued to demand that the MVA – which came together after the 2019 assembly election to pip the BJP to the post – be disbanded.

There are 288 members in the state assembly, of which one seat is vacant. The effective strength of the House, therefore, is 287. The Sena has 55 members, the NCP has 53 (of this, two people, Nawab Malik and Anil Deshmukh, are in jail, and therefore, will likely not be allowed to participate in assembly proceedings) and Congress 44. They have the support of three smaller parties and nine independent members. Together, the MVA has 166 members. The BJP has 106 lawmakers. It is backed by two smaller parties and four independents. Its strength is 112.

A letter sent by Shinde to governor Bhagat Singh Koshyari and acting speaker Narhari Zirwal appended the signatures of 30 Sena lawmakers. Out of this, Nagpur MLA Nitin Deshmukh returned to Mumbai on Wednesday and said he had been taken to Surat without his consent. But in the evening, two more Sena lawmakers – along with two independents – landed in Guwahati and met Shinde, taking his tally to 31. To circumvent the anti-defection law and avoid disqualification, Shinde needs two-thirds of the Sena’s original strength, ie, 37 members. In his speech, Thackeray also targeted the rebel group. “Some people are alleging or creating an air that this is not the Shiv Sena that Balasaheb built. We are still taking forward his ideals. After Balasaheb passed away in 2012, we contested on our own in the 2014 polls. We had the same ideology of Hindutva then, we have the same today and will remain in the future. We got 63 MLA at that time, and some people enjoyed ministerial berths in that government. That too was Shiv Sena of Balasaheb,” said Thackeray, in a veiled jibe at Shinde. Shinde was given PWD (public utilities) portfolio in the Devendra Fadnavis government between 2014 and 2019.

Hours later, Shinde hit back, saying the MVA government boosted the alliance partners (NCP and Congress) but not Shiv Sena. “While allies grew stronger, Shiv Sena and Shiv Sainik were left demoralised,” he said, indicating he was unwilling to budge.

The BJP, which largely watched from the sidelines even as the rebels received police protection in two states ruled by the party, insisted it has nothing to do with the drama playing out within the Sena

“Congress and NCP will extend full support to MVA government. I also had a word with Sharad Pawar Ji who told me that NCP will continue supporting MVA…no other intent. I’m sure Shiv Sena rebels will not taint the state of Shivaji Maharaj,” Maharashtra Congress observer Kamal Nath said.