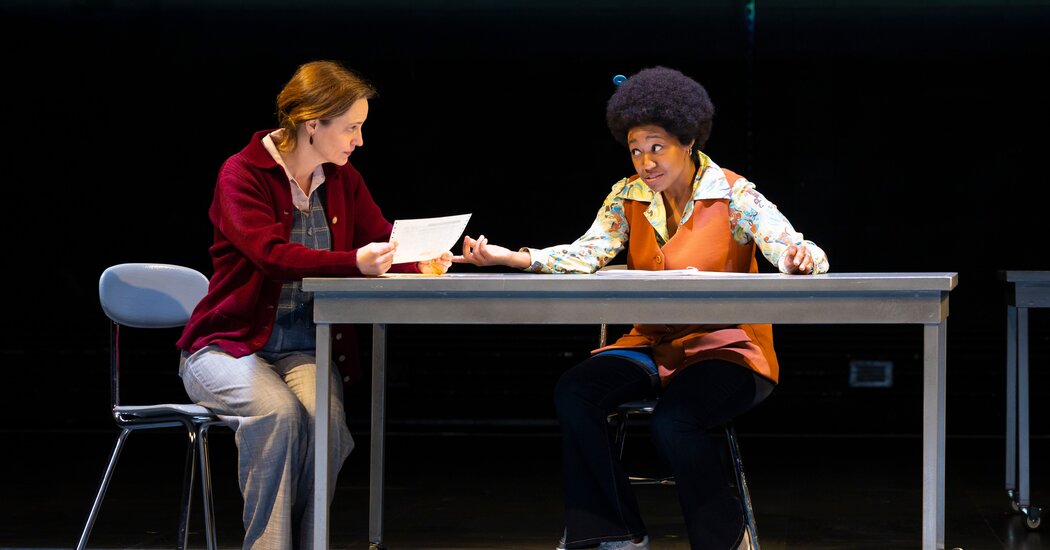 BOSTON — It’s been nearly half a century since a federal judge ordered the city schools here desegregated by busing, and 37 years since the writer J. Anthony Lukas plumbed the resultant turmoil in his Pulitzer-winning tome, “Common Ground,” which entered the canon of seminal Boston texts.

Now a leading nonprofit theater here, arguing that the shadow of busing and the depictions in “Common Ground” continue to shape this city’s reputation and its race relations, is staging a reconsideration of the book, filtered through the prism of a diverse group of contemporary artists.

The play, “Common Ground Revisited,” which opened June 10 at the Huntington Theater Company, has been 11 years in the making, begun as a thought experiment in a classroom at Emerson College, and delayed, like so many stage projects, by the coronavirus pandemic. The cast is made up of Boston actors, and the work layers their observations on top of the events in the book, which follows the busing crisis through the lives of three families.

“This book has a strong, vibrant legacy in Boston — many people have read it, and there are varying opinions about it and what it means,” said the playwright Kirsten Greenidge, who developed the project with Melia Bensussen; Greenidge wrote the adaptation, and Bensussen, who is the artistic director of Hartford Stage, directed it.

“We’re insistent on the ‘revisited’ part,” Greenidge said. “It’s not a straight up adaptation of the book — it’s having the book be in conversation with us, in the present day.”

The play, bracketed by several alternative ways of staging — and seeing — a final high school encounter between two students, one Black and one white, is not a takedown of the book, but does gently suggest that there are other historical figures whose stories also matter to Boston’s history, or, as one actor says during the play, “There’s more than one book.”

“Boston, to me, as it was sold: Revolutionary War, maybe a little bit of busing, and then somehow we’re here, with ‘The Departed,’ ‘The Town’ and ‘Good Will Hunting’ sprinkled in there,” said Omar Robinson, a Baltimore native who relocated to Boston and is one of the actors in the cast. “But our actual history is so rich and multicultural and Black, and that is very frequently overlooked. Maybe not anymore, hopefully.”

That history can sometimes feel very present, and sometimes very distant. The play is being staged in the city’s South End, described in “Common Ground” as “a shabbier, scruffier part of the city,” but now polished and pricey. The city, long led by white men, now has its first Asian American mayor, Michelle Wu; she followed an acting mayor, Kim Janey, who was the first Black person to hold that office, and who had been among those bused for desegregation purposes when she was a child.

The school district’s demographics have also changed enormously: Today, just 14.5 percent of students in the Boston public schools are white, down from 57 percent in 1973. And the school system is about half the size it was: There are currently 48,957 students, down from 93,647. (By comparison, in New York City there are about 1 million public school students, of whom 14.7 percent are white.)

Although many in the 12-person Huntington ensemble are too young to have lived through the busing crisis, it still looms large. During that era, the actress Karen MacDonald’s stepfather taught at the city’s Hyde Park High School; the actor Michael Kaye’s friend’s father was a state trooper assigned to Charlestown High School, where busing had been greeted by walkouts, protests and an attempted firebombing of the building.

Kadahj Bennett, another member of the cast, noted that the events of those days had changed the course of his own schooling a generation later. “My father is an immigrant from Jamaica, moved here and he was involved in busing — he got bused to West Roxbury High and had a miserable time,” he said. “With that, my parents decided I wasn’t going to go to public school.”

One striking aspect of performing a play about recent history in the city where it took place: Many people in the audience have memories of the scenes depicted, or even know some of the characters. Some nights, the actors say, patrons come up to tell them what they got wrong, or right, in portraying the city and its struggles, and to share their own memories.

Some still have deeply personal connections to the history being depicted.

Tito Jackson, a former Boston city councilman and mayoral candidate who now runs a cannabis company, has a particularly remarkable link: He learned a few years ago that his birth mother was Rachel E. Twymon, who was a child in one of the families featured in the book. Twymon became pregnant at age 12, and her mother insisted that the child be given up for adoption. Just last year, The Boston Globe reported that Jackson had discovered he was that child.

“I read the book four or five times when I was in college — I was a history and sociology major — so finding out that my birth was in the book was a huge surprise and pretty emotional,” Jackson said in an interview. The book describes the pregnancy that led to Jackson’s birth as the result of sexual experimentation and “foolin’ around,” but Twymon said the truth is she was raped, and Jackson credits the Huntington play with making that clear.

“Her life was indelibly stamped, and often framed, by this book, and, frankly, the short shrift that the book gave to a pregnancy and the birth of a child,” Jackson, who is now 47, said. “Then the folks at Emerson questioned how a 12-year-old, in 1975, with one of the strictest moms ever, got pregnant.”

Jackson said of the play, “I’m very touched, and I feel that Rachel’s story — her perspective as well as her truth — was finally acknowledged.”

His mother, who is now 60, is less enthusiastic, feeling that the play doesn’t sufficiently capture the horrors of the busing era. “You’re talking about a time when things were very hectic, and very unstable,” Twymon said. “The play was told nicely, and that’s not how Boston was at that time.”

Another intense personal connection to the play is that of Theodore C. Landsmark, who now directs an urban policy research center at Northeastern University. Landsmark has had a distinguished career, but will forever be known as the Black man who was set upon by a white man wielding an American flag as a weapon in Boston’s City Hall Plaza in 1976; Stanley Forman’s photograph of the assault won a Pulitzer Prize, and came to symbolize the racism and violence of the busing era.

“Initially I found it off-putting to have all of my life defined by that one moment,” Landsmark, 76, said. “Over time I’ve gotten used to it, and I recognize it’s an opportunity to talk about things I care about — the inequalities that continue to exist in Boston, particularly within our professional ranks.”

Landsmark said “Common Ground” remains hugely influential. “The book is assigned to all kinds of high school and college classes as a point of entry into understanding Boston, and I know that many people look at Boston through the prism of ‘Common Ground’,” he said. “People who have never been to the city will immediately raise either the book or the photograph as a reason for their reluctance to relocate from places that are easily as racist as Boston is.”

Bensussen, the director, said she wasn’t sure whether the play would have a life outside Boston, given its intensely local focus, but noted that local students were more likely to study the national Civil Rights movement than the Boston busing crisis, and said she was hopeful that the play might prompt some rethinking of that. Landsmark said he could imagine excerpts from the play being staged in a variety of settings to spark discussion about ongoing forms of segregation.

As for the actors, several of them said they wanted to feel optimistic that progress is underway, but were torn about whether that is realistic given the state of the nation today.

“I want there to be hope, but it’s not a thing I see every day — it’s not a thing I’ve encountered during my nearly 20 years in the city,” Robinson said. “Reading this book, working on this, it shined a bright light on its past, and therefore its present, in a lot of ways for me. Not just here in Boston — this country has got a loaded history. But I hope for hope.”