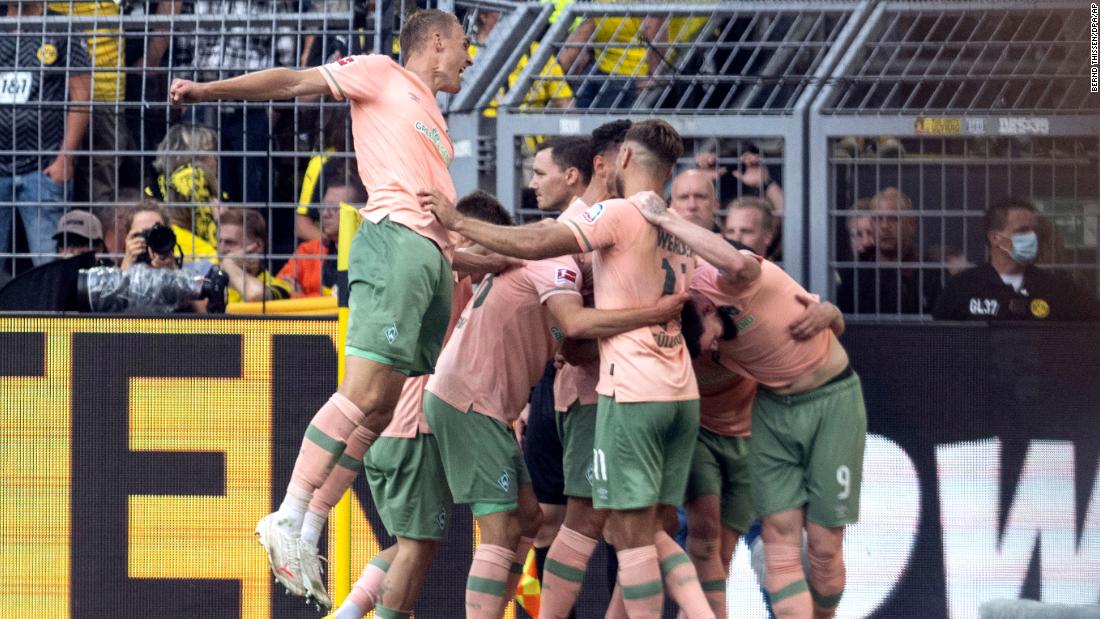 Edin Terzic’s side had a sluggish start to the match, failing to pierce Werder’s sturdy defense.

Dortmund eventually capitalized on its second attempt at goal when midfielder Julian Brandt dribbled the ball down the right side of the pitch and fired into the bottom corner from just outside the penalty area.

The 81,365 spectators roared in anticipation, watching on as Dortmund secured a lead after an unpromising first-half performance.

Portuguese defender Raphael Guerreiro seemingly cemented his side’s victory with a powerful strike in the 76th minute, drilling the ball past a sea of Werder shirts to put his side ahead 2-0.

However, Ole Werner’s side found its rhythm in the 89th minute when English defender Lee Buchanan took advantage of a deflection off Dortmund’s Thorgan Hazard and chipped the ball into the top corner.

The River Islanders built on their momentum and enjoyed an unbeatable streak in injury time. German midfielder Niklas Schmidt rocketed an aggressive header past Gregor Kobel to equalize 2-2, thanks to an assist from teammate Amos Pieper.

‘I actually don’t have words’

With their sensational comeback, Werder became the first team in the last 13 seasons of the top five European Leagues to win when losing by multiple goals entering the 89th minute, according to ESPN.

“I actually don’t have the words for it. It was insane,” Burke said after the match, according to the Werder Bremen website.

“We had a huge mountain to climb and I’m proud of our performance today. I’m really happy for the boys and for the team; everyone has trained long and hard and it’s paying off now.

“As a striker, you have to find any hole you can in the opposition’s defense, and I did that well today. I’m always hungry for goals and being able to score in back-to-back games is really cool. I simply put my head down and plowed on through and hit the ball as hard as I could — and it worked. It’s one of the best goals I’ve ever scored, and the pass from Mitchell was perfect. I’m insanely happy to have been able to score again,” Burke said of his winning goal.

“I have no idea what just happened. If I knew, we would have stopped it happening,” German veteran Marco Reus told Sky Sports after the match, according to the Borussia Dortmund website.

“We had no control over the game even though we were 2-0 up — that was the case for the whole 90 minutes. Then Bremen pulled one back in the 89th minute and came to life. But in the end we just didn’t play well enough throughout the game,” he added.