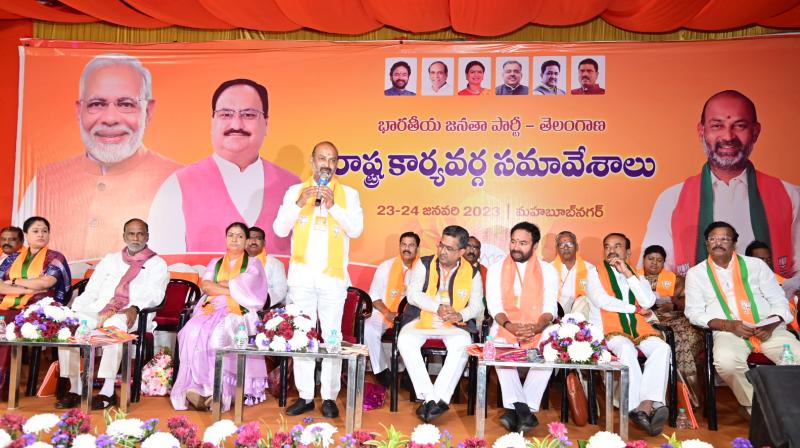 MAHBUBNAGAR: The Telangana BJP on Tuesday demanded a white paper from the “KCR family on its wealth and assets in 2014, and its current assets and wealth today,” with the party state president Bandi Sanjay Kumar declaring a war on the BRS government led by Chief Minister K Chandrashekar Rao at the start of the party’s state executive meeting.

Sanjay also set a January 30 deadline for the Chief Minister to solve the problems arising for teachers and other government employees because of G.O. 317, with a warning that if Chandrashekar Rao fails to meet the deadline, the BJP will hold a massive protest at Dharna Chowk in Hyderabad. “There is no question of us letting KCR go free on this issue. We saw a replay of the days of Razakaars the way women teachers and their children were treated by the police,” Sanjay said.

The state BJP chief kicked off the one-day state party executive meeting in Mahbubnagar and set the stage for the day-long meeting with a call to party leaders and workers not to work for themselves but for the people. “The entire Telangana is in the grip of problems, all sections of the people are facing problems. KCR made the state bankrupt with a Rs 5 lakh crore debt burden and every family has a debt burden of Rs 6 lakh because of his profligacy,” Sanjay said.

Sanjay warned the party leaders and workers to watch out for “attempts to spread confusion by KCR in the party to divert their attention. Be aware that he will target you, your families, try to tarnish your reputations. But we should not be distracted from our goal.”

The party is expected to adopt a slew of resolutions during the course of the day on the political situation in the state, the way forward for the BJP in Telangana, and thanking Prime Minister Narendra Modi for the support given to the state by the Union government.