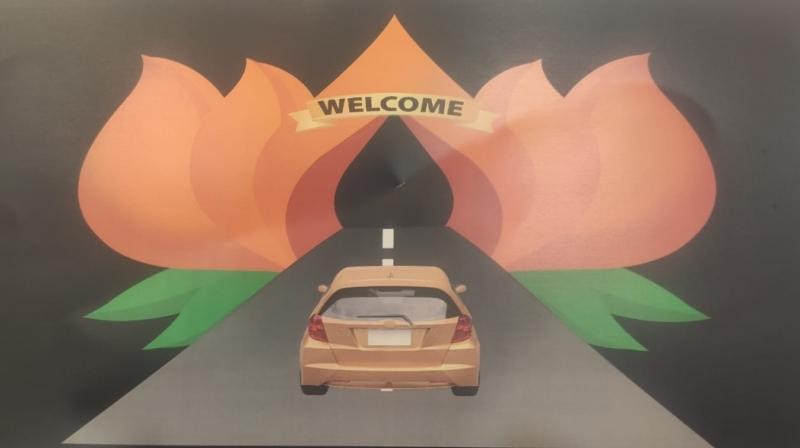 HYDERABAD: The national executive meeting of the Bharatiya Janata Party on July 2 and 3 in the city will not just be about the who’s who of the ruling party at the Centre making a beeline to Hyderabad, but also about the party turning the event, as well as the public meeting on July 3 to be addressed by Prime Minister Narendra Modi, into a festival of party flags, the BJP symbol of lotuses, banners, buntings, hoardings, and of course balloons.

In a massive exercise to reflect the seriousness of the BJP in making its presence felt in the city, and to send a strong message to the rest of the Telangana that the party is here to stay and to challenge the TRS in the next Assembly elections, a publicity committee for the two-day event has made plans to turn Hyderabad into a virtual sea of saffron and green, the party colours, in the run up to the two-day political jamboree.

“We will have around 10,000 banners, 200 hoardings, in addition to erecting flexis on 10,000 electric poles in the city about the party, and the event,” Lankala Deepak Reddy, who heads the publicity committee, told Deccan Chronicle. Also, around 500 bus stops in the city will have the party flexis displayed on them, he said.

The highlights as far the decorations are concerned, will be massive cutouts of the lotus flower, the BJP symbol in saffron and green, that will be erected at Hitex in Madhapur, one of the venues for the party’s national executive meeting, and at the entrance of the venue for the public meeting. “They will be large enough to allow cars to pass through them,” Deepak Reddy said.

Also planned are ‘selfie points’ that will proclaim ‘I Love BJP’ along with a cutout of Prime Minister Narendra Modi, at all tourist spots in the city, and at several major traffic intersections, as there will be large balloons at several other locations.